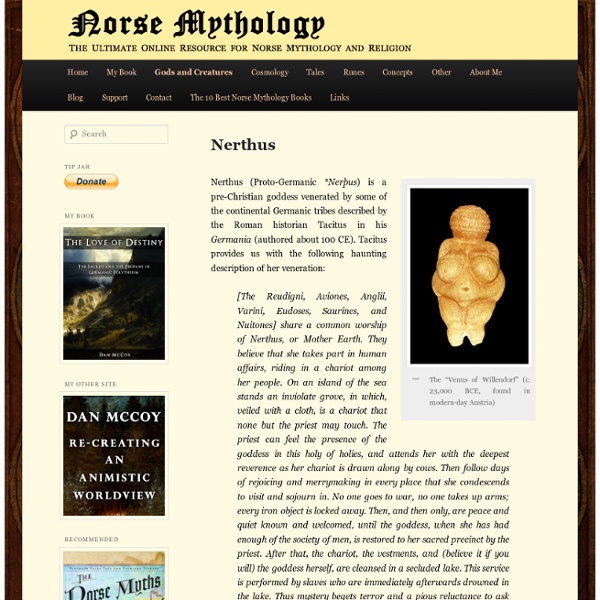 The “Venus of Willendorf” (c. 23,000 BCE, found in modern-day Austria) Nerthus (Proto-Germanic *Nerþus) is a pre-Christian goddess venerated by some of the continental Germanic tribes described by the Roman historian Tacitus in his Germania (authored about 100 CE). Tacitus provides us with the following haunting description of her veneration: [The Reudigni, Aviones, Anglii, Varini, Eudoses, Saurines, and Nuitones] share a common worship of Nerthus, or Mother Earth. Tacitus’s account has been corroborated by archaeology, as a number of finds have demonstrated that practices such as the one he describes here did indeed take place during the period in question, and, in fact, even farther back in the history of the Germanic peoples. Nerthus’s name also suggests a connection with the Vanir deities. Given Tacitus’s identification of Nerthus with Terra Mater (“Mother Earth”), it’s also tempting to identify Nerthus with Jörð (Old Norse “Earth”), the obscure mother of Thor. References: Related:  Norse mythology

Odin | Norse Mythology Odin (pronounced “OH-din”; Old Norse Óðinn, Old English and Old Saxon Woden, Old High German Wuotan, Wotan, or Wodan, Proto-Germanic *Woðanaz, “Master of Ecstasy”) is one of the most complex and enigmatic characters in Norse mythology, and perhaps in all of world literature. He’s the chief of the Aesir tribe of deities, yet he often ventures far from their kingdom, Asgard, on long, solitary wanderings throughout the cosmos on purely self-interested quests. He’s a relentless seeker after and giver of wisdom, but he has little regard for communal values such as justice, fairness, or respect for law and convention. He’s the divine patron of rulers, and also of outcasts. He’s a war-god, but also a poetry-god, and he has prominent transgender qualities that would bring unspeakable shame to any traditional Norse/Germanic warrior. He’s worshiped by those in search of prestige, honor, and nobility, yet he’s often cursed for being a fickle trickster. What’s in a Name? War Sovereignty Poetry

Thor | Norse Mythology “Thor’s Battle with the Giants” by Mårten Eskil Winge (1872) Thor (Old Norse Þórr, Old English Đunor, Old High German Donar, Proto-Germanic *Þunraz, “Thunder”[1]) is one of the most prominent figures in Norse mythology. He was a major god of all branches of the Germanic peoples before their conversion to Christianity, although he reached the height of his popularity among the Scandinavians of the late Viking Age. The Warrior God Par Excellence Thor, the brawny thunder god, is the archetype of a loyal and honorable warrior, the ideal toward which the average human warrior aspired. He’s the indefatigable defender of the Aesir gods and their fortress, Asgard, from the encroachments of the giants, who are usually (although far from invariably) the enemies of the gods. No one is better suited for this task than Thor. Thor’s particular enemy is Jormungand, the enormous sea serpent who encircles Midgard, the world of human civilization. Hallowing Fertility and Agriculture References:

Freyr | Norse Mythology “Freyr” by Johannes Gehrts (1901) Freyr (pronounced “FREY-ur;” Old Norse Freyr, “Lord”) is a god who belongs to the Vanir tribe of deities. He’s also an honorary member of the other tribe of Norse gods, the Aesir, having arrived in their fortress, Asgard, as a hostage at the closing of the Aesir-Vanir War. Freyr was one of the most widely and passionately venerated divinities amongst the heathen Norse and other Germanic peoples. It shouldn’t be surprising, then, that Freyr was a frequent recipient of sacrifices at various occasions, such as the blessing of a wedding[4] or the celebration of a harvest. His father is Njord, and his mother is Njord’s unnamed sister[6] (presumably Nerthus). Freyr’s residence is Alfheim, the homeland of the elves.[8] This could mean that Freyr is the ruler of the elves, but since this is never stated explicitly in the surviving sources, it must remain a fascinating conjecture. During Ragnarok, Freyr and the giant Surt destroy each other. References: [4] Ibid.

Heimdall | Norse Mythology “Heimdall on the Rainbow Bridge” by Emil Doepler (1905) Heimdall (pronounced “HAME-doll;” Old Norse Heimdallr, whose meaning/etymology is unknown[1]) is one of the Aesir gods and the ever-vigilant guardian of the gods’ stronghold, Asgard. His dwelling is called Himinbjörg (“Sky Cliffs,” connoting a high place ideal for a fortress), which sits at the top of Bifrost, the rainbow bridge that leads to Asgard. During Ragnarok, the gods know that their doom is at hand when they hear the dire call of Gjallarhorn signaling the imminent arrival of the giants, who cross the rainbow bridge to storm Asgard and kill the gods. Taken together, certain verses in Old Norse poetry seem to indicate that Heimdall was once considered to be the father of humankind, and possibly to have established the hierarchical structure of Norse society as well.[3][4] Heimdall himself is, like so many of the Norse deities, a son of Odin. References: [1] Turville-Petre, E.O.G. 1964. [2] Snorri Sturluson.