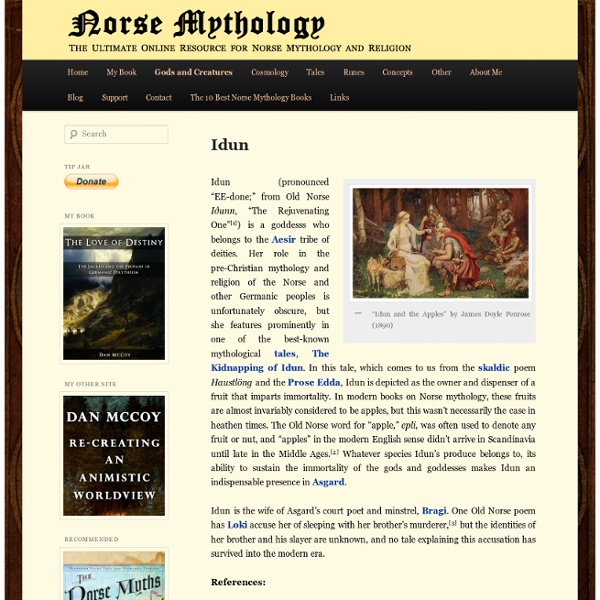 Heimdall | Norse Mythology “Heimdall on the Rainbow Bridge” by Emil Doepler (1905) Heimdall (pronounced “HAME-doll;” Old Norse Heimdallr, whose meaning/etymology is unknown[1]) is one of the Aesir gods and the ever-vigilant guardian of the gods’ stronghold, Asgard. His dwelling is called Himinbjörg (“Sky Cliffs,” connoting a high place ideal for a fortress), which sits at the top of Bifrost, the rainbow bridge that leads to Asgard. During Ragnarok, the gods know that their doom is at hand when they hear the dire call of Gjallarhorn signaling the imminent arrival of the giants, who cross the rainbow bridge to storm Asgard and kill the gods. Taken together, certain verses in Old Norse poetry seem to indicate that Heimdall was once considered to be the father of humankind, and possibly to have established the hierarchical structure of Norse society as well.[3][4] Heimdall himself is, like so many of the Norse deities, a son of Odin. References: [1] Turville-Petre, E.O.G. 1964. [2] Snorri Sturluson.

Frigg | Norse Mythology “Frigga Spinning the Clouds” by John Charles Dollman (1909) Frigg (pronounced “FRIG;” Old Norse Frigg, “Beloved”[1]), sometimes Anglicized as “Frigga,” is the highest-ranking of the Aesir goddesses. She’s the wife of Odin, the chief of the gods, and the mother of Baldur. Strangely for a goddess of her high position, the surviving primary sources on Norse mythology give only sparse and casual accounts of anything related to her personality, deeds, or other attributes. The specifics they do discuss, however, are not unique to Frigg, but are instead shared by both her and Freya, a goddess who belongs to both the Aesir and the Vanir tribes of deities. Frigg and Freya Like Freya, Frigg is depicted as a völva, a Viking Age practitioner of the form of Norse magic known as seidr. In the Viking Age, the völva was an itinerant seeress and sorceress who traveled from town to town performing commissioned acts of seidr in exchange for lodging, food, and often other forms of compensation as well.