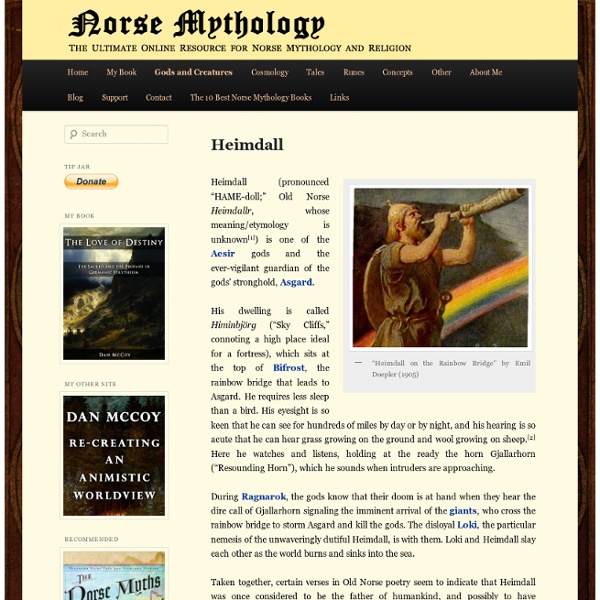 “Heimdall on the Rainbow Bridge” by Emil Doepler (1905) Heimdall (pronounced “HAME-doll;” Old Norse Heimdallr, whose meaning/etymology is unknown[1]) is one of the Aesir gods and the ever-vigilant guardian of the gods’ stronghold, Asgard. His dwelling is called Himinbjörg (“Sky Cliffs,” connoting a high place ideal for a fortress), which sits at the top of Bifrost, the rainbow bridge that leads to Asgard. During Ragnarok, the gods know that their doom is at hand when they hear the dire call of Gjallarhorn signaling the imminent arrival of the giants, who cross the rainbow bridge to storm Asgard and kill the gods. Taken together, certain verses in Old Norse poetry seem to indicate that Heimdall was once considered to be the father of humankind, and possibly to have established the hierarchical structure of Norse society as well.[3][4] Heimdall himself is, like so many of the Norse deities, a son of Odin. References: [1] Turville-Petre, E.O.G. 1964. [2] Snorri Sturluson. Related:  Norse mythology

Frigg | Norse Mythology “Frigga Spinning the Clouds” by John Charles Dollman (1909) Frigg (pronounced “FRIG;” Old Norse Frigg, “Beloved”[1]), sometimes Anglicized as “Frigga,” is the highest-ranking of the Aesir goddesses. She’s the wife of Odin, the chief of the gods, and the mother of Baldur. Strangely for a goddess of her high position, the surviving primary sources on Norse mythology give only sparse and casual accounts of anything related to her personality, deeds, or other attributes. The specifics they do discuss, however, are not unique to Frigg, but are instead shared by both her and Freya, a goddess who belongs to both the Aesir and the Vanir tribes of deities. Frigg and Freya Like Freya, Frigg is depicted as a völva, a Viking Age practitioner of the form of Norse magic known as seidr. In the Viking Age, the völva was an itinerant seeress and sorceress who traveled from town to town performing commissioned acts of seidr in exchange for lodging, food, and often other forms of compensation as well.

Thor | Norse Mythology “Thor’s Battle with the Giants” by Mårten Eskil Winge (1872) Thor (Old Norse Þórr, Old English Đunor, Old High German Donar, Proto-Germanic *Þunraz, “Thunder”[1]) is one of the most prominent figures in Norse mythology. He was a major god of all branches of the Germanic peoples before their conversion to Christianity, although he reached the height of his popularity among the Scandinavians of the late Viking Age. The Warrior God Par Excellence Thor, the brawny thunder god, is the archetype of a loyal and honorable warrior, the ideal toward which the average human warrior aspired. He’s the indefatigable defender of the Aesir gods and their fortress, Asgard, from the encroachments of the giants, who are usually (although far from invariably) the enemies of the gods. No one is better suited for this task than Thor. Thor’s particular enemy is Jormungand, the enormous sea serpent who encircles Midgard, the world of human civilization. Hallowing Fertility and Agriculture References:

Loki | Norse Mythology Loki (pronounced “LOAK-ee;” Old Norse Loki, whose meaning/etymology is unknown[1]) is the wily trickster god of Norse mythology. While treated as a nominal member of the Aesir tribe of gods in the Eddas and sagas, Loki occupies a highly ambivalent and ultimately solitary position amongst the gods, giants, and the other classes of invisible beings that populate the traditional spirituality of the Norse and other Germanic peoples. His familial relations attest to this. His father is the giant Fárbauti (“Cruel Striker”), and his mother, Laufey (possibly “Tree”), could be a goddess, a giantess, or something else entirely – the surviving sources are silent on this point. Loki often runs afoul not only of societal expectations, but also of what we today might call “the laws of nature.” In the tales, Loki is portrayed as a scheming coward who cares only for shallow pleasures and self-preservation. Loki is perhaps best known for his malevolent role in The Death of Baldur. References: