The Vanir Gods and Goddesses 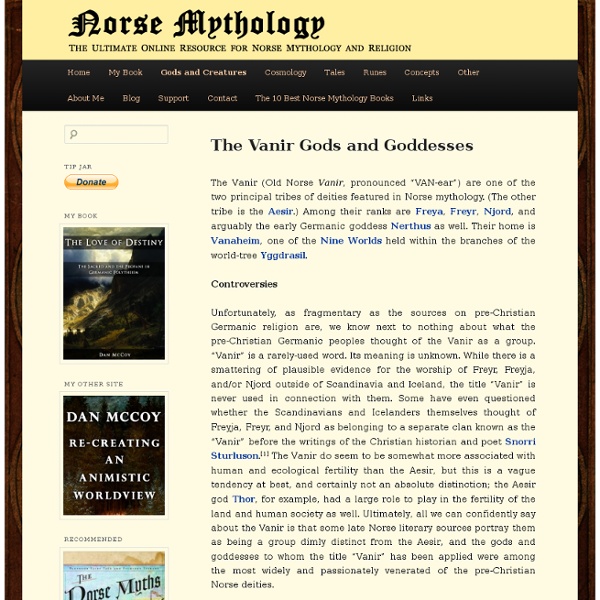 Giants “The Nøkk Screams” by Theodor Kittelsen (c. 1900) The giants of the pre-Christian mythology and religion of the Norse and other Germanic peoples are a tribe of spiritual beings whose power equals that of the two tribes of gods, the Aesir and the Vanir. Their character, however, is very different from that of the gods – and, in fact, the giants and the gods correspond to opposing, but intertwined, cosmological principles. The Devourers “Giants” is a misleading Anglicization of the name of these beings. In modern English, of course, a “giant” is first and foremost something of enormous size. Speakers of Old Norse called them jötnar (singular jötunn, pronounced roughly “YO-tun”) or þursar (singular þurs, pronounced “THURS” like the first element in “Thursday” but with a soft “s” at the end). How, then, did these “devourers” come to be called “giants?” Utangard Spirits The world of the devourers is Jotunheim, “the world of the jötnar,” which is also called Utgard (Old Norse Útgarðr).

Valhalla In Norse mythology, Valhalla (from Old Norse Valhöll "hall of the slain"[1]) is a majestic, enormous hall located in Asgard, ruled over by the god Odin. Chosen by Odin, half of those who die in combat travel to Valhalla upon death, led by valkyries, while the other half go to the goddess Freyja's field Fólkvangr. In Valhalla, the dead join the masses of those who have died in combat known as Einherjar, as well as various legendary Germanic heroes and kings, as they prepare to aid Odin during the events of Ragnarök. Before the hall stands the golden tree Glasir, and the hall's ceiling is thatched with golden shields. Valhalla is attested in the Poetic Edda, compiled in the 13th century from earlier traditional sources, the Prose Edda, written in the 13th century by Snorri Sturluson, Heimskringla, also written in the 13th century by Snorri Sturluson, and in stanzas of an anonymous 10th century poem commemorating the death of Eric Bloodaxe known as Eiríksmál as compiled in Fagrskinna.

Odin | Norse Mythology Odin (pronounced “OH-din”; Old Norse Óðinn, Old English and Old Saxon Woden, Old High German Wuotan, Wotan, or Wodan, Proto-Germanic *Woðanaz, “Master of Ecstasy”) is one of the most complex and enigmatic characters in Norse mythology, and perhaps in all of world literature. He’s the chief of the Aesir tribe of deities, yet he often ventures far from their kingdom, Asgard, on long, solitary wanderings throughout the cosmos on purely self-interested quests. He’s a relentless seeker after and giver of wisdom, but he has little regard for communal values such as justice, fairness, or respect for law and convention. What’s in a Name? As mentioned above, Odin’s name can be translated as “Master of Ecstasy.” This ecstasy that Odin embodies and imparts is the unifying factor behind the myriad areas of life with which he is especially associated: war, sovereignty, wisdom, magic, shamanism, poetry, and the dead. War Sovereignty Odin’s preference for the elite extends to all realms of society.

Norse mythology An undead völva, a Scandinavian seeress, tells the spear-wielding god Odin of what has been and what will be in Odin and the Völva by Lorenz Frølich (1895) For the practices and social institutions of the Norse pagans, see Norse paganism Norse mythology, or Scandinavian mythology, is the body of mythology of the North Germanic people stemming from Norse paganism and continuing after the Christianization of Scandinavia and into the Scandinavian folklore of the modern period. The northernmost extension of Germanic mythology, Norse mythology consists of tales of various deities, beings, and heroes derived from numerous sources from both before and after the pagan period, including medieval manuscripts, archaeological representations, and folk tradition. Most of the surviving mythology centers on the plights of the gods and their interaction with various other beings, such as humanity and the jötnar, beings who may be friends, lovers, foes and/or family members of the gods. Sources[edit]

Loki | Norse Mythology Loki (pronounced “LOAK-ee;” Old Norse Loki, whose meaning/etymology is unknown[1]) is the wily trickster god of Norse mythology. While treated as a nominal member of the Aesir tribe of gods in the Eddas and sagas, Loki occupies a highly ambivalent and ultimately solitary position amongst the gods, giants, and the other classes of invisible beings that populate the traditional spirituality of the Norse and other Germanic peoples. His familial relations attest to this. His father is the giant Fárbauti (“Cruel Striker”), and his mother, Laufey (possibly “Tree”), could be a goddess, a giantess, or something else entirely – the surviving sources are silent on this point. Loki is the father, by the giantess Angrboða (“Anguish-Boding”) of Hel, the goddess of the grave, Jormungand, the great serpent who slays Thor during Ragnarok, and Fenrir, the wolf who bites off one of the hands of Tyr and who kills Odin during Ragnarok – hardly a reputable brood, to say the least. References:

Heimdall | Norse Mythology “Heimdall on the Rainbow Bridge” by Emil Doepler (1905) Heimdall (pronounced “HAME-doll;” Old Norse Heimdallr, whose meaning/etymology is unknown[1]) is one of the Aesir gods and the ever-vigilant guardian of the gods’ stronghold, Asgard. His dwelling is called Himinbjörg (“Sky Cliffs,” connoting a high place ideal for a fortress), which sits at the top of Bifrost, the rainbow bridge that leads to Asgard. He requires less sleep than a bird. During Ragnarok, the gods know that their doom is at hand when they hear the dire call of Gjallarhorn signaling the imminent arrival of the giants, who cross the rainbow bridge to storm Asgard and kill the gods. Taken together, certain verses in Old Norse poetry seem to indicate that Heimdall was once considered to be the father of humankind, and possibly to have established the hierarchical structure of Norse society as well.[3][4] Heimdall himself is, like so many of the Norse deities, a son of Odin. References: [1] Turville-Petre, E.O.G. 1964.

Thor | Norse Mythology “Thor’s Battle with the Giants” by Mårten Eskil Winge (1872) Thor (Old Norse Þórr, Old English Đunor, Old High German Donar, Proto-Germanic *Þunraz, “Thunder”[1]) is one of the most prominent figures in Norse mythology. He was a major god of all branches of the Germanic peoples before their conversion to Christianity, although he reached the height of his popularity among the Scandinavians of the late Viking Age. The Warrior God Par Excellence Thor, the brawny thunder god, is the archetype of a loyal and honorable warrior, the ideal toward which the average human warrior aspired. No one is better suited for this task than Thor. Thor’s particular enemy is Jormungand, the enormous sea serpent who encircles Midgard, the world of human civilization. Given his ever-vigilant protection of the ordered cosmos of pre-Christian northern Europe against the forces of chaos, destruction, and entropy represented by the giants, it’s somewhat ironic that Thor is himself three-quarters giant. Hallowing

Tyr | Norse Mythology “Tyr and Fenrir” by John Bauer (1911) Tyr (pronounced like the English word “tear”; Old Norse Týr, Old English Tiw, Old High German *Ziu, Gothic Tyz, Proto-Germanic *Tiwaz, “god”[1][2]) is a relatively minor Aesir god in Viking Age Norse mythology. However, his name and attributes along with evidence from the study of comparative religion divulge to us that his Viking Age form is a severely diminished version of a divine figure who, in earlier ages, was the highest god of the Norse and other Germanic peoples. (By the Viking Age, this role had been usurped by Odin.) Tyr in the Viking Age While mentions of Tyr in Old Norse literature are few, he certainly seems to have been regarded as one of the principal war gods of the Norse, along with Odin and Thor. The Lokasenna also mentions that Tyr lost one of his hands to the wolf Fenrir.[5] Indeed, Tyr’s one-handed-ness seems to be one of his defining attributes. Tyr Before the Viking Age Such is certainly the case with Tyr. References: [5] Ibid.