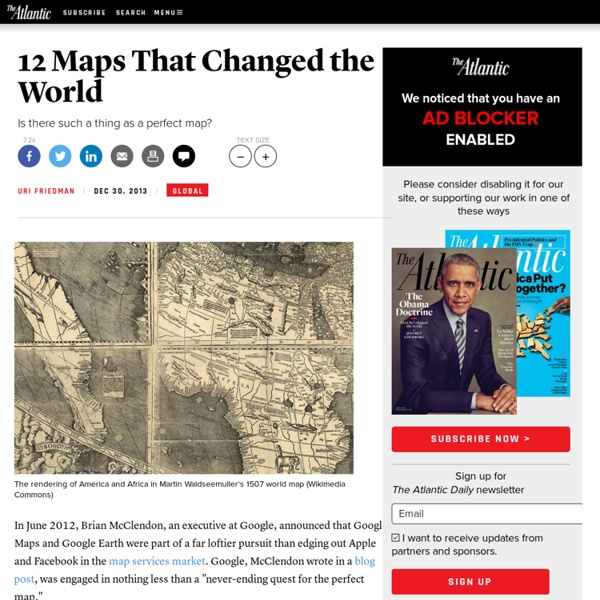 "All cultures have always believed that the map they valorize is real and true and objective and transparent," Brotton, a professor of Renaissance studies at Queen Mary University of London, told me. "All maps are always subjective.... Even today’s online geospatial applications on all your mobile devices and tablets, be they produced by Google or Apple or whoever, are still to some extent subjective maps." There are, in other words, no perfect maps—just maps that (more-or-less) perfectly capture our understanding of the world at discrete moments in time. In his new book, A History of the World in 12 Maps, Brotton masterfully catalogs the maps that tell us most about pivotal periods in human history. I asked him to walk me through the 12 maps he selected (you can click on each map below to enlarge it). 1. 2. 3. This map from England's Hereford Cathedral depicts "what the world looked like to medieval Christians," Brotton says. 4. 5. 6. 7. 8. 9. 10. 11. 12.

40 Maps That Will Help You Make Sense of the World If you’re a visual learner like myself, then you know maps, charts and infographics can really help bring data and information to life. Maps can make a point resonate with readers and this collection aims to do just that. Hopefully some of these maps will surprise you and you’ll learn something new. World at war: The incredible video that shows 1,000 years of war in five minutes By Daily Mail Reporter Published: 05:01 GMT, 20 September 2012 | Updated: 13:09 GMT, 20 September 2012 War has sadly become pretty much a constant in our lives with the on-going conflicts in Iraq and Afghanistan, but it wasn't always so as this animated video shows. To help compare and contrast the history of war over the past 1,000 years, a YouTube user has created this incredible animated video which illustrates all the important battles that have taken place over the last ten centuries. Video: 1,000 years of war in five minutes One thousand years of war are represented over a five-minute span.

Questioning Toolkit Essential Questions These are questions which touch our hearts and souls. They are central to our lives. They help to define what it means to be human. Most important thought during our lives will center on such essential questions. Internet Modern History Sourcebook: Main Page The Internet Modern History Sourcebook now contains thousands of sources and the previous index pages were so large that they were crashing many browsers. See Introduction for an explanation of the Sourcebook's goals. Explanation of Sources of Material Here . See the Help!

The Beauty of Maps: A Documentary Here we bring you the 4 part BBC series, The Beauty of Maps. Released almost a year ago the documentary takes us through the staggering four million map collection of the British Library in London. Through the ages the story of the worlds landscape and population has been told through the creative and colorful use of maps. National Geologic Map Database HomeCatalogLexiconMapViewStandardsComments Find Us: Accessibility FOIA Privacy Policies and Notices 197 Educational YouTube Channels You Should Know About 197 Educational YouTube Channels You Should Know About If you don’t have a YouTube channel as an education provider, there’s a good chance you’re behind the times. Nearly every major educational institution in the world now hosts its own collection of videos featuring news, lectures, tutorials, and open courseware. Just as many individuals have their own channel, curating their expertise in a series of broadcasted lessons. These channels allow instructors to share information and blend media in unprecedented and exciting new ways. From teaching Mandarin Chinese to busting myths about Astronomy, the educational possibilities are virtually endless pun intended!

100 Awesome Blogs for History Junkies Posted on Wednesday September 10, 2008 by Staff Writers By Britney Wilkins If you’re a history junkie, you surely know by now that the Internet is a great tool for finding information. But did you know that blogs are some of the most useful resources out there? Here you’ll find blogs about periods in history, genealogy, war, and lots more. Mapping Global Human Activity Air traffic routes between North America and Europe It is absolutely astonishing that our world has reached a population exceeding 7 billion, as of this past Sunday. With so many people occupying our world over many centuries, and with the number steadily growing, we're all bound to have had a significant impact on the planet. Luckily, Canadian scientist Felix Pharand-Deschenes has created visuals of our planet equipped with statistical graphics to represent various human influences on this home we call Earth. Pharand-Deschenes' Anthropocene Mapping project marks the paths of human activity including roadways, railways, airway traffic, internet cables, electricity transmission lines, and underwater data cables.

A Taxonomy of Reflection: A Model for Critical Thinking My approach to staff development (and teaching) borrows from the thinking of Donald Finkel who believed that teaching should be thought of as “providing experience, provoking reflection.” He goes on to write, … to reflectively experience is to make connections within the details of the work of the problem, to see it through the lens of abstraction or theory, to generate one’s own questions about it, to take more active and conscious control over understanding. ~ From Teaching With Your Mouth Shut