How Sleep Deprivation Decays the Mind and Body - Seth Maxon 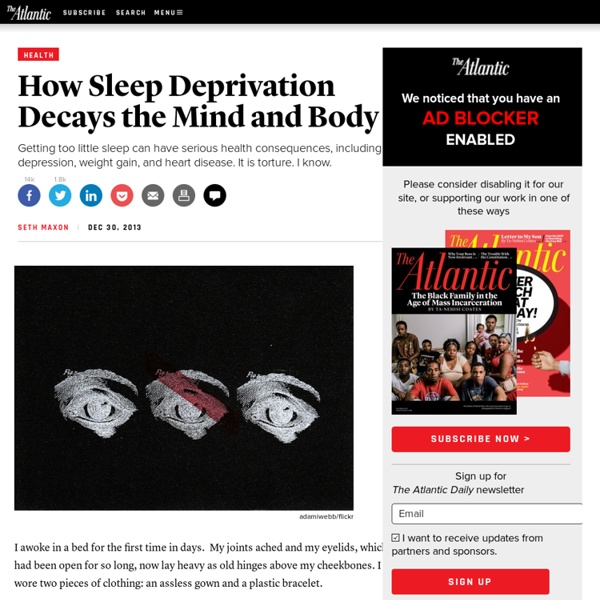 I awoke in a bed for the first time in days. My joints ached and my eyelids, which had been open for so long, now lay heavy as old hinges above my cheekbones. I wore two pieces of clothing: an assless gown and a plastic bracelet. I remembered the hallway I had been wheeled down, and the doctor’s office where I told the psychiatrist he was the devil, but not this room. In those first moments, I remembered the basics about what had landed me in the hospital: Some pseudo-philosophical ranting and flailing brought on by a poorly executed experiment to see how long I could last without sleep. I was 18, in Italy, on a school-sponsored trip with that pompously misnamed group for American teens who earn As and Bs, the National Honor Society. Why? To this day, I am not sure how many consecutive nights I spent awake, but it was at least four. Unlike other basic bodily functions, such as eating and breathing, we still do not fully understand why people need to sleep. Dr. Related:  Brain,Mind,Psychology

How Steve Jobs Trained His Own Brain / Inc.com What Do Your Dreams Mean? Here’s How You Can Decode Them Scientists may still debate the meaning and purpose of dreams, but we ordinary dreamers seem to have an insatiable desire to parse the who, what and why of what happens when we doze off. It’s hard not to believe that at least some of our sleep-time scenarios are imbued with some sort of significance. And there are a slew of new websites and apps that are feeding that curiosity with the tantalizing promise of helping us to decode the messages that we might otherwise miss. Some use algorithms developed by psychologists and cognitive scientists to create feedback. Why bother? That means that dreams can also offer useful clues for people who aren’t in therapy as well. As far as how symbolic dreams can be, she says the people in your dream can be who they seem to be, or represent people who are like them. Others aren’t so quick to dismiss online dream dictionaries (such as DreamMoods, Dream Dictionary-Dream Central, Dream Meanings, Way of Dreams and Dream Key).

What 'Food Porn' Does to the Brain — The Atlantic In the mid-20th century, the Dutch biologist Nikolaas Tinbergen uncovered an odd quirk of animal behavior: Across species, the animals in his experiments seemed to prefer prettier, flashier, more attention-grabbing versions of their natural environments—“supernormal stimuli,” he called them—even when those stimuli were fake. Certain types of fish, he found, would become more violent towards dummy fish whose undersides were more vibrant than the species’ usual color; mother birds would ignore their own eggs to sit on a nest of larger, more colorful imitations, or divert food from their children to feed models of chicks with brighter beaks. “The essence of the supernormal stimulus,” the psychiatrist Deirdre Barrett wrote in her book on the subject, “is that the exaggerated imitation can cause a stronger pull than the real thing.” “We humans can produce our own,” she continued, like “candy sweeter than any fruit,” or pornography. What’s the appeal in ogling what you can’t have?

Red makes men behave "like animals" 31 October 2008 by Kate Melville A new study by two University of Rochester psychologists adds color - literally and figuratively - to the age-old question of what attracts men to women. Appearing in the Journal of Personality and Social Psychology, the research provides the first empirical support for society's enduring love affair with red. "It's only recently that psychologists and researchers in other disciplines have been looking closely and systematically at the relationship between color and behavior. Although this aphrodisiacal effect of red may be a product of societal conditioning alone, the authors argue that men's response to red more likely stems from deeper biological roots. "Our research demonstrates a parallel in the way that human and nonhuman male primates respond to red," say the researchers. To quantify the red effect, the study looked at men's responses to photographs of women under a variety of color presentations. Source: University of Rochester

This Is a Baby’s Brain on Pain | TIME In a first, researchers at Oxford University have watched infants as young as a day old as their brains process a light prodding of their feet. The results confirm that yes, babies do indeed feel pain, and that they process it similarly to adults. Until as recently as the 1980s, researchers assumed newborns did not have fully developed pain receptors, and believed that any responses babies had to pokes or pricks were merely muscular reactions. Taking advantage of the fact that newborns less than a week old tend to sleep through anything, Rebeccah Slater, an associate professor of pediatric neuroimaging at Oxford, and her colleagues placed 10 infants who were 1-6 days old in an fMRI machine. In adult brains, 20 regions were activated by the painful stimulus, and the newborns shared 18 of these. Even at birth, then, a baby’s brain possesses the foundation for quickly evaluating anything he or she experiences, including painful stimuli.

Animal Intelligence Under-rated By Humans, Researchers Say Dec 05, 2013 06:09 AM EST For many millennia, we humans have considered ourselves superior, primarily due to our large brains and our ability to reason. However, we might not be as smart as we think. Researchers from Australia point out that there are different kinds of geniuses out there, some even better than us. Dolphins can communicate via echolation, while hyenas use smell-based networking sites. Dr Arthur Saniotis, Visiting Research Fellow with the University's School of Medical Sciences says that the concept of "ad nauseam", which means humans are exceptional by virtue and are "the most intelligent species on Earth" might not be true and that animals are intelligent in their own unique ways. The idea that humans are exceptional probably emerged about 10,000 years back when humans decided to take up farming. "The belief of human cognitive superiority became entrenched in human philosophy and sciences. © 2015 NatureWorldNews.com All rights reserved.

Brain cancer may grow faster the more you think In a newly published study, medical researchers led by neurologist Michelle Monje at Stanford report than many aggressive forms of brain cancer appear to worsen the more you think. Not just about the cancer, but anything. The more brain activity you have, the faster the cancer cells divide. Monje and her colleagues came to this realization while studying diffuse intrinsic pontine glioma (DIPG), a rare cancer found in children that is untreatable by any current means. Myelin is a compound created by glial cells that covers and insulates the axons of nerve cells. To test the effect of this process on cancer, researchers implanted gliomas in the brains of mice, then stimulated neuron activity in the area around the tumors. So where does this get us?

Why some people remember dreams and others don't Do you often remember your dreams? Or maybe when you're awake, what went on during sleep remains a mystery. A group of researchers in France conducted a study to find out why some people remember dreams while others don't. They studied brain scans of 41 people while they were awake and asleep. ​Whether awake or asleep, those participants showed higher activity levels in the medial prefrontal cortex and the temporoparietal junction — areas involved in processing information, including external stimuli. The results also showed people who often remember their dreams are more prone to waking up during the night. "Sleepers who can recall their dreams vividly have twice as much wakefulness during sleep as people who forget them almost immediately, meaning they probably wake up briefly during the night, cementing their dreams into memory." As the lead researcher explains, the "​sleeping brain is not capable of memorizing new information; it needs to awaken to be able to do that."