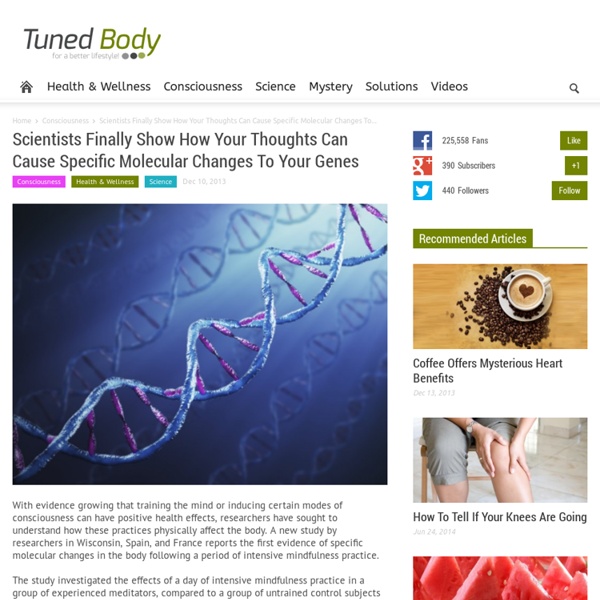 With evidence growing that training the mind or inducing certain modes of consciousness can have positive health effects, researchers have sought to understand how these practices physically affect the body. A new study by researchers in Wisconsin, Spain, and France reports the first evidence of specific molecular changes in the body following a period of intensive mindfulness practice. The study investigated the effects of a day of intensive mindfulness practice in a group of experienced meditators, compared to a group of untrained control subjects who engaged in quiet non-meditative activities. After eight hours of mindfulness practice, the meditators showed a range of genetic and molecular differences, including altered levels of gene-regulating machinery and reduced levels of pro-inflammatory genes, which in turn correlated with faster physical recovery from a stressful situation. The study was published in the Journal Psychoneuroendocrinology. According to Dr. In fact, Dr. Dr. Related:  Neuroscience & Consciousness

Gene expression changes with meditation With evidence growing that meditation can have beneficial health effects, scientists have sought to understand how these practices physically affect the body. A new study by researchers in Wisconsin, Spain, and France reports the first evidence of specific molecular changes in the body following a period of mindfulness meditation. The study investigated the effects of a day of intensive mindfulness practice in a group of experienced meditators, compared to a group of untrained control subjects who engaged in quiet non-meditative activities. After eight hours of mindfulness practice, the meditators showed a range of genetic and molecular differences, including altered levels of gene-regulating machinery and reduced levels of pro-inflammatory genes, which in turn correlated with faster physical recovery from a stressful situation. The study was published in the journal Psychoneuroendocrinology. The results show a down-regulation of genes that have been implicated in inflammation.

Neurostimulation: The Next Mind-Expanding Idea Amol Sarva expounds on the next frontier in the exploration of consciousness: neurostimulation (via Wired UK): The idea of stimulating brain performance seemed very plausible when I first heard about it, taking my PhD in cognitive science at Stanford. Your brain operates with electricity; why couldn’t electric current or waves boost it a bit? Gentlemen physicists such as Volta and Galvani were fiddling with frogs’ legs and cadavers back around the late 18th century. Another Italian wrote about curing melancholia with electricity in 1804. And today, everyone knows about the power of shock therapy.But what appeared on my radar in 2003 was different: a headset that sent weak electromagnetic waves into your head.

This is your brain on art: Why we’re moved by certain works Great art is often said to be universal. But when we read, hear, or see a work that strikes a chord within us, the experience feels intensely personal. Although the artist may live on the other side of the world, or even have died centuries ago, he or she seems to be speaking directly to us. So what’s behind this striking sense of connectedness? A trio of brain researchers believes it has found an answer. “Certain artworks, albeit unfamiliar, may be so well-matched to an individual’s unique makeup that they obtain access to the neural substrates concerned with the self—access which other external stimuli do not get,” writes a research team led by Edward Vessel of New York University’s Center for Brain Imaging. This activation allows the poem, play, or painting “to interact with the neural processes related to the self, affect them, and possibly even be incorporated into them,” the researchers write in the journal Frontiers in Neuroscience.

A Neuroscientist's Radical Theory of How Networks Become Conscious - Wired Science WIRED: How do you square what you believe about animal consciousness with how they're used in experiments? Koch: There are two things to put in perspective. First, there are vastly more animals being eaten at McDonald's every day. The number of animals used in research pales in comparison to the number used for flesh. And we need basic brain research to understand the brain's mechanisms. WIRED: Getting back to the theory, is your version of panpsychism truly scientific rather than metaphysical? Koch: In principle, in all sorts of ways. The theory also says you can have simple systems that are conscious, and complex systems that are not. The more relevant question, to me as a scientist, is how can I disprove the theory today. WIRED: I still can't shake the feeling that consciousness arising through integrated information is — arbitrary, somehow. Koch: If you think about any explanation of anything, how far back does it go? With consciousness, it's ultimately going to be like that.

Your brain sees things you don't University of Arizona doctoral degree candidate Jay Sanguinetti has authored a new study, published online in the journal Psychological Science, that indicates that the brain processes and understands visusal input that we may never consciously perceive. The finding challenges currently accepted models about how the brain processes visual information. A doctoral candidate in the UA's Department of Psychology in the College of Science, Sanguinetti showed study participants a series of black silhouettes, some of which contained meaningful, real-world objects hidden in the white spaces on the outsides. Saguinetti worked with his adviser Mary Peterson, a professor of psychology and director of the UA's Cognitive Science Program, and with John Allen, a UA Distinguished Professor of psychology, cognitive science and neuroscience, to monitor subjects' brainwaves with an electroencephalogram, or EEG, while they viewed the objects. The answer, Sanguinetti's data indicates, is yes.

Autonomous sensory meridian response A video intended to trigger ASMR Autonomous sensory meridian response (ASMR) is a euphoric experience characterized by a static-like tingling sensation on the skin that typically begins on the scalp and moves down the back of the neck and upper spine, precipitating relaxation. Overview[edit] Definition[edit] Origins of the name[edit] The term 'autonomous sensory meridian response' (ASMR) was coined on 25 February 2010 by Jennifer Allen, a cybersecurity professional residing in New York[3] in the introduction to a Facebook Group she founded entitled the 'ASMR Group'.[4] Prior to the subsequent social consensus that led to what is now the ubiquitous adoption of that term, other names were proposed and discussed at a number of locations including the Steady Health forum, the 'Society of Sensationalists' Yahoo! Allen chose the words intending or assuming them to have the following specific meanings: The sensation and its triggers[edit] The sensation[edit] The triggers[edit] Whispering triggers[edit]

Herpes Medication Produces "Walking Corpse Syndrome" Pharmacologists have discovered a mechanism that triggers Cotard’s syndrome – the mysterious condition that leaves people feeling like they, or parts of their body, no longer exist. With the ability to switch the so-called walking corpse syndrome on and off comes the prospect of new insights into consciousness.Acyclovir – also known by the brand name Zovirax – is a common drug used to treat cold sores and other herpes infections. However, about 1 per cent of people who take the drug orally or intravenously experience some psychiatric side effects, including Cotard’s. Learning New Ideas Alters Brain Cells Phineas Gage proved that matter could affect consciousness. Now, Shernaz Bamji and Stefano Brigidi of the University of British Columbia have proven the reverse is also true. Looks like the “hardwiring” in our brains isn’t so hard: A new University of British Columbia study identifies an important molecular change that occurs in the brain when we learn and remember.Published this month in Nature Neuroscience, the research shows that learning stimulates our brain cells in a manner that causes a small fatty acid to attach to delta-catenin, a protein in the brain.

Brain stimulation affects compliance with social norms Public release date: 3-Oct-2013 [ Print | E-mail Share ] [ Close Window ] Contact: Christian Ruffvchristian.ruff@econ.uzh.ch 41-446-345-067University of Zurich How does the human brain control compliance with social norms? The biological mechanisms that underlie norm compliance are still poorly understood. Prefrontal cortex controls norm behavior For the study, 63 participants took part in an experiment in which they received money and were asked to decide how much of it they wanted to share with an anonymous partner. By means of a technique called "transcranial direct current stimulation," which sends weak and painless electric currents through the skull, the excitability of specific brain regions can be modulated. Brain stimulation affects normative behavior Literature: Christian C. Contact: Prof. Prof. [ Print | E-mail AAAS and EurekAlert!

Synchronized virtual reality heartbeat triggers out-of-body experiences New research demonstrates that triggering an out-of-body experience (OBE) could be as simple as getting a person to watch a video of themselves with their heartbeat projected onto it. According to the study, it's easy to trick the mind into thinking it belongs to an external body and manipulate a person's self-consciousness by externalizing the body's internal rhythms. The findings could lead to new treatments for people with perceptual disorders such as anorexia and could also help dieters too. In a typical out-of-body experience a person either experiences a feeling of floating outside of their body or of viewing it from outside of themselves. Most of us don't experience OBE's because our brains are constantly filtering information from all our senses to help us identify what we are and what we aren't. For instance we know that our reflection isn't actually part of us. The research could help people with distorted views of themselves to connect with their actual physical appearance.

The neuroscience of dying: Brain activity continues up to 30 seconds after blood flow stops By Agence France-PresseMonday, August 12, 2013 16:49 EDT There may be a scientific explanation for the vivid near-death experiences, such as seeing a shining light, that some people report after surviving a heart attack, US scientists said Monday. Apparently, the brain keeps on working for up to 30 seconds after blood flow stops, according to a study published in the Proceedings of the National Academy of Sciences. University of Michigan scientists did their research on nine lab rats that were anesthetized and then subjected to induced cardiac arrest as part of the experiment. In the first 30 seconds after their hearts were stopped, they all showed a surge of brain activity, observed in electroencephalograms (EEGs) that indicated highly aroused mental states. “We were surprised by the high levels of activity,” said senior author George Mashour, professor of anesthesiology and neurosurgery at the University of Michigan. “Do we know if animals experience ‘consciousness’? Agence France-Presse