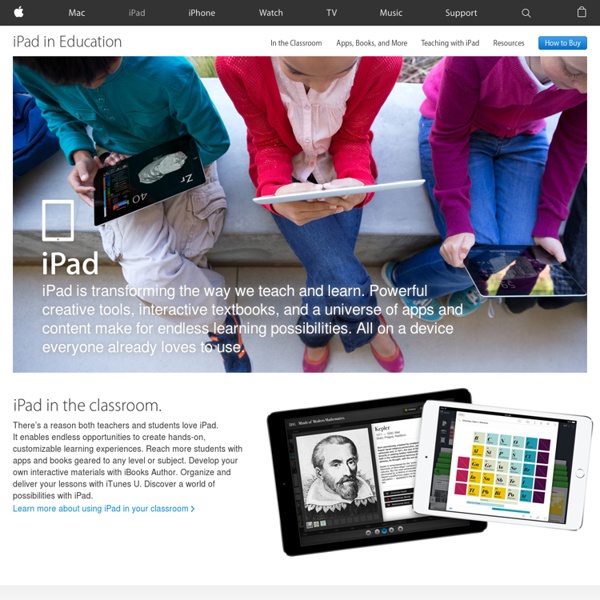 There’s a reason iPad has become a favorite with students and teachers. Every lesson is more hands-on. You can easily customize the learning experience for each student with apps and books geared to any level. Or teach with your own interactive materials created with iBooks Author. And you can organize and deliver all your lessons with iTunes U, so your students have access to their learning materials on iPad wherever they go.Learn more about teaching with iPad When it comes to finding content for your lessons, iPad has something for everything you teach.

Top 5 iPad apps for Educators It would be remiss of me not to put together an obligatory iPad story that is loosely linked to education so here are some top iPad apps for educators who feel as though they need to do something work related on it after they have finished playing with all the fun stuff on it iWork Until Microsoft release office for the iPad iWork offers the MS Works equivalent of a productivity suite for the iPad. Pages, Numbers and Keynote make for a fairly impressive productivity suite for $30, or $10 each. The Elements: A Visual Exploration: Sounds a bit pricey for a periodic table, but the vividly animated illustrations of every substance our world is made of more than make up for it. $14

The Arrival of the iPad - The Top 10 Everything of 2010 In April, Steve Jobs launched his iPad. And it was good. The iPad was not the first eReader or Tablet on the market nor was it as multi-functional as the iPhone (you can't make phone calls with an iPad). But, as British actor and humorist Stephen Fry wrote in TIME's cover story about the device, Apple simply gets something fundamental about human habits better than any other tech company: "If you have an object in your pocket or hand for hours every day, then your relationship with it is profound, human and emotional. Apple's success has been founded on consumer products that address this side of us: their products make users smile as they reach forward to manipulate, touch, fondle, slide, tweak, pinch, prod and stroke."

Bloom’s Taxonomy and iPad Apps  LearningToday shares with everyone two beautiful posters, that help us remember Bloom’s Taxonomy: the Blooming Butterfly and the Blooming Orange. How do we connect the Bloom’s Taxonomy with the iPad? Following inDave Mileham and Kelly Tenkeley’s footsteps of assigning iPad apps to the different levels of the Bloom’s Taxonomy, I created the following table with apps that I have tested out and am recommending. (Click to see a larger version of the image) iPads in Education - Apple's Configurator Overview A week ago I spent 5 hours at one of our local schools playing with Apple's new tool for managing iPads - Apple Configurator. I have to say that it was time well spent - I can see this being a viable tool for school districts struggling with managing large numbers of iOS devices. Some of the pros & cons (as some people might see them) to using this:

The Must-Have App Review Rubric Added by Jeff Dunn on 2011-11-22 So you just downloaded a few educational apps that you think might be useful in your classroom. How do you accurately compare and contrast them? Thanks to a new app review rubric from by eMobilize , it’s easier than ever to understand just how useful an app may be in the classroom. Measuring the iPad's Potential for Education Analysis Measuring the iPad's Potential for Education Educators and analysts weigh in on how the iPad could infiltrate the hallways of K-12 schools nationwide By Bridget McCrea01/27/10 Thanks to the fact that Pinellas County high schools release early on Wednesdays, Catherine Nothstein didn't even have to skip school to watch the live feed of the Apple iPad announcement on her home laptop.

Umami Wants to Be the Ultimate Second Screen App for iPad Umami is a new iPad app that aims to bring an enhanced, second-screen experience to broadcast and cable TV programming. Second screen apps are becoming standard fare for networks. Using audio fingerprinting technology, these apps can tell what you're watching — and provide an updated, customized experience based on the show. At the Mashable Media Summit last week, second screen experiences were highlighted as one of the major media trends of 2012. 10 Free E-Book Sites for iPad Want to get the most out of your iPad - Are you using it as an e-reader? There are multiple sites that offer free downloads of both classic and contemporary publications and the reading experience on the iPad is actually quite good. The font size, the instant access to chapters and pages and the .......all make for a positive reading experience. Coupled with this is the fact that this is about the only way to get anybody under the age of 20 to read for any length of time at all. For younger readers and kids learning to the read the interactive experience will engender a love of interaction with the written word. This is especially true of the newer types of apps that are coming out.

Video In this video, you will learn how to add and edit text objects in a SMART amp workspace. Viewers will also learn how to format text, using the workspace text editor, and clone formatted text to save time when creating workspace content. In this video, you will learn how to insert a SMART Notebook file into a SMART amp workspace. 7 Great iPad Writing apps Writing is the backbone skill in literacy learning0 There are actually several free web tools that teachers can use to easily develop and boost their students writing capabilities. Educational Technology and Mobile Learning has already reviewed many of them but today we are going to explore those web apps that we can use on iPad for the same purposes : developing writing skills. As you know, we give priority to free technology be it apps, web tools or anything else that can be of some benefit to teachers but sometimes we run out of options and are left only with paid apps such as the case with the list below.

10 Excellent iPad Applications for Teachers With the iPad2 on the launching pad, it’s a great time to share this list of useful iPad apps for teachers from guest writer Paula Dierkens. There’s no doubt that the iPad is an excellent device, and if you own this gadget, it makes sense to pick up the applications best suited to your lifestyle and profession. So if you’re a teacher, here are ten great iPad apps that you must try out: [Note to readers of this article! I conducted a survey in March of 2012 to update this list of iPad apps that educators like to use in their professional roles, so it is based on actual teacher input. 10 Must-Have Apps for the New iPad Owner The iPad has finally made its international debut, meaning that thousands and thousands of new users will be enjoying Apple's latest device over the coming weeks. With the launch of the iPad comes the international launch of the iPad App Store, making it possible for us to play Words With Friends with our friends in Australia. There are already thousands of apps available in the App Store, and with the exception of apps focused on media services like Netflix, ABC or Pandora, most are also available internationally. We've been fortunate enough to have the iPad in our screen-smudging paws for the past two months and in that time we've surveyed well over 100 apps and games for the new platform.