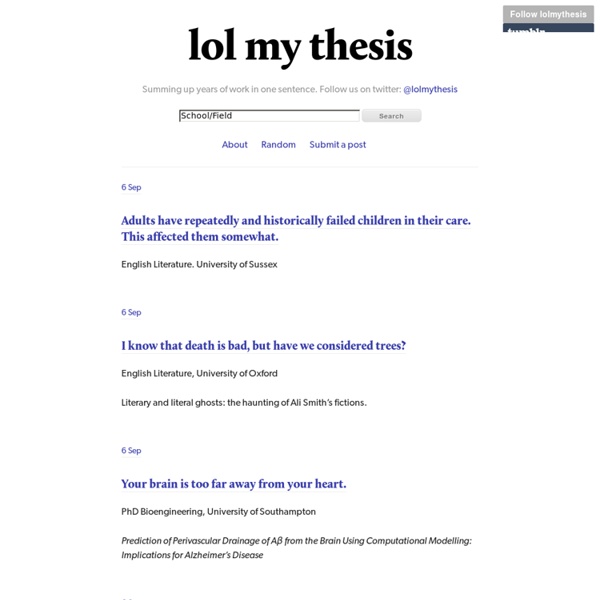 3,000 Years of Human History, Described in One Set of Mathematical Equations Most people think of history as a series of stories—tales of one army unexpectedly defeating another, or a politician making a memorable speech, or an upstart overthrowing a sitting monarch. Peter Turchin of the University of Connecticut sees things rather differently. Formally trained as a ecologist, he sees history as a series of equations. Specifically, he wants to bring the types of mathematical models used in fields such as wildlife ecology to explain population trends in a different species: humans. In a paper published with colleagues today in the Proceedings of the National Academy of Sciences, he presents a mathematical model (shown on the left of the video above) that correlates well with historical data (shown on the right) on the development and spread of large-scale, complex societies (represented as red territories on the green area studied). The simulation runs from 1500 B.C.E. to 1500 C.E.

TOP STORY: What Trends May Come in 2016 TOP STORY What Trends May Come in 2016 What will next year’s information industry headlines be about? We’ve gathered a team of experts—some familiar, some new to these pages—to take an educated guess as to what we’ll be talking about in 2016. So whether it’s grand predictions about changes that will rock the technology and info pro world for decades to come, or smaller trends that might take center stage for just a year, join our experts as they take a look into possible futures of the industry. Industry at a Tipping Point Leigh Watson Healy Chief Analyst, Outsell

SmarterEveryDay Twitter SmarterEveryDay Loading... Working... The Backwards Brain Bicycle - Smarter Every Day 133 14,875,581 views 1 year ago Get your own here ⇒ Shirt: Support Link: ⇒ ⇐ ↓↓↓↓↓↓↓READ MORE: ↓↓↓↓↓↓↓Here's the link from the Amsterdam meetup! Animated Information Graphics: Using Data and Motion to Reveal the Story In this class you'll learn how to create information graphics that use data and reveal stories through animation. You'll learn how to go from data/reporting to an engaging and animated information graphic. What You'll Learn Microhistories of the Mundane: 10 Books About Everyday Stuff This October, author Nicholas A. Basbanes’ book, On Paper, examines the biography of arguably one of the most significant and impactful inventions in human history: paper. All two thousand years of its evolution is documented in 450 pages. (It would seem wrong somehow to read those pages electronically, rather than as ink-on-paper, wouldn’t it?) Paper is such an everyday material, a prolific tool that we hardly even notice it. But in fact it does warrant 450 pages – and likely much more, had Basbanes publisher allowed it – as do many other mundane, seemingly inconsequential objects in our lives.

The secret world of membership libraries A man in Oakland, California, disrupted web development around the world last week by deleting 11 lines of code. The story of how 28-year-old Azer Koçulu briefly broke the internet shows how writing software for the web has become dependent on a patchwork of code that itself relies on the benevolence of fellow programmers. When that system breaks down, as it did last week, the consequences can be vast and unpredictable. “I think I have the right of deleting all my stuff,” Koçulu wrote on March 20 in an email that was later made public.

Research Trends: Special Focus, The Arts & Humanities The Arts & Humanities include a diverse range of subjects, including many of the oldest intellectual pursuits such as Philosophy, Religion, Music, History, Art, Theatre and Literature. These disciplines, along with fields such as Language, Linguistics and the History of Science, share a common concern with humanity and culture. This mutual interest means that we can expect much of the research in the Arts & Humanities to bridge disparate fields, in much the same way as modern scientific research increasingly links traditionally separate disciplines. One method for investigating this multidisciplinarity of research is to look at the citation links formed between journals when a paper published in one journal makes reference to a paper published in another.

Dressing Constitutionally: Hierarchy, Sexuality, and Democracy from Our Hairstyles to Our Shoes: Introduction by Ruthann Robson The intertwining of our clothes and our Constitution raise fundamental questions of hierarchy, sexuality, and democracy. From our hairstyles to our shoes, constitutional considerations both constrain and confirm our daily choices. In turn, our attire and appearance provide multilayered perspectives on the United States Constitution and its interpretations. Our garments often raise First Amendment issues of expression or religion, but they also prompt questions of equality on the basis of gender, race, and sexuality. At work, in court, in schools, in prisons, and on the streets, our clothes and grooming provoke constitutional controversies. Additionally, the production, trade, and consumption of apparel implicate constitutional concerns including colonial sumptuary laws, slavery, wage and hour laws, and current notions of free trade.

5 questions to ask yourself before starting a blog Academics and researchers are repeatedly being told about the benefits of blogging and networking online. And rightly so – there is a lot to be gained from broadening your writing experience and reaching out to new audiences. However, starting a blog can be time consuming and, like many other career decisions you will have to make, it is worthwhile putting some thought into it before you start purchasing vanity URLs or spending hours customising themes. Image: Pixabay

Why Nerds are Unpopular February 2003 When we were in junior high school, my friend Rich and I made a map of the school lunch tables according to popularity. This was easy to do, because kids only ate lunch with others of about the same popularity. Visual Literacy in an Age of Data Statistician Hans Rosling inserts himself into charts during a TED talk and creates a narrative around the data. Shazna Nessa explains visual literacy and why it’s critical for data visualizers to take it seriously. It’s not what you look at that matters, it’s what you see.

Toothpaste in hotels: Why do they provide shampoo, soap, and high-end toiletries but no toothpaste? Photo by Kacper Pempel/Reuters A few weeks ago, I spent a night at the Kendall Hotel in Cambridge, Mass., a congenial place done up in a firehouse theme with an atrium on the top floor. There’s a bowl of apples in the lobby, free wine and snacks at happy hour, high-thread-count bedsheets, super-plush towels, a complimentary breakfast, and—just like at every other hotel in North America—a set of toiletries so paltry and penurious that it wouldn’t be out of place in a federal prison. Standard rooms at the Kendall come with four bathroom items: two bottled hair products (labeled “hair purifier” and “hair protector”) and two bars of soap (labeled “cleansing” and “exfoliating”). These come from Gilchrist & Soames, a high-end purveyor of sample-size cosmetics for the hospitality industry, and they’re more than acceptable for an overnight guest. Yet despite the fancy branding, there’s one way in which the Kendall Hotel leaves its visitors vastly unprepared to face the day.

Shorter, better, faster, free — Advice for authoring a PhD or academic book Blogging changes the nature of academic research, not just how it is communicated One of the recurring themes (from many different contributors) on the LSE Impact of Social Science blog is that a new paradigm of research communications has grown up — one that de-emphasizes the traditional journals route, and re-prioritizes faster, real-time academic communication. Blogs play a critical intermediate role. They link to research reports and articles on the one hand, and they are linked to from Twitter, Facebook, Pinterest, Tumblr and Google+ news-streams and communities. So in research terms blogging is quite simply, one of the most important things that an academic should be doing right now. But in addition, STEM scientists, social scientists and humanities scholars all have an obligation to society to contribute their observations to the wider world.