34 Essential Items For Your Bug Out Bag 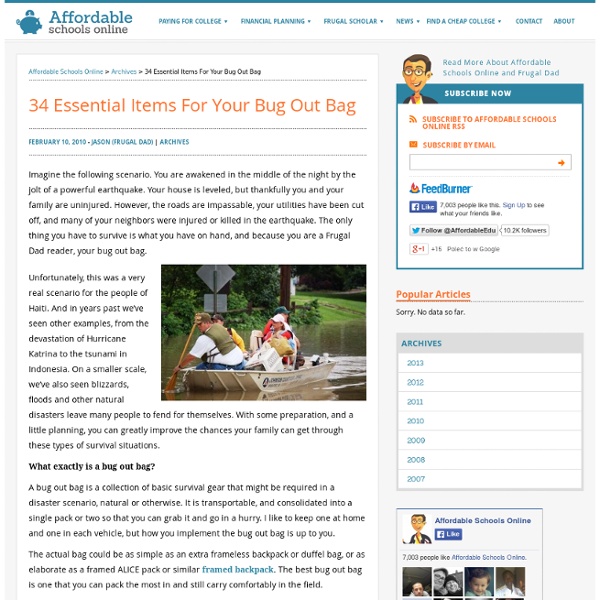 Imagine the following scenario. You are awakened in the middle of the night by the jolt of a powerful earthquake. Your house is leveled, but thankfully you and your family are uninjured. However, the roads are impassable, your utilities have been cut off, and many of your neighbors were injured or killed in the earthquake. The only thing you have to survive is what you have on hand, and because you are a Frugal Dad reader, your bug out bag. Unfortunately, this was a very real scenario for the people of Haiti. What exactly is a bug out bag? A bug out bag is a collection of basic survival gear that might be required in a disaster scenario, natural or otherwise. The actual bag could be as simple as an extra frameless backpack or duffel bag, or as elaborate as a framed ALICE pack or similar framed backpack. What About Bugging In? In some cases, it might make sense to “bug in.” What goes in a bug out bag? A couple rations of food (I buy from MountainHouse.com).

Starting My Bug Out Bag I am starting my first Bug Out Bag. I’ve packed for a bunch of backpacking and camping trips in my life but I have never had a Bug Out Bag. I am going to write update articles here on Survival Cache when I add stuff to my BOB so new survivalists can follow along and I can ask questions and get ideas from the more experienced preppers out there. Ultimate Survival Kit Would you be willing to stake your life on your survival kit? I would. There are so many debates when it comes to the perfect survival kit. In my opinion, the items you choose to be in a survival kit can be very different based on the situation you see yourself in (maritime vs. desert survival) as well as your level of skill.

Bug Out Bags – The Ultimate Resource Guide What’s a Bug Out Bag? Most people who have a basic understanding of survival and preparedness understand the need for a good Bug Out Bag. It’s probably one of the most talked about items on survival websites and is something that has become a bit of an iconic symbol for preppers and survivalists. If you haven’t heard of the term Bug Out Bag you may have heard someone refer to it as a; Go Bag, 72 Hour Bag, Get Home Bag, Get out of Dodge bag or some other variation. Survival Gear & Bug Out Bags A Bug out bag is basically a large survival kit that’s filled with everything you need to survive after a disaster. A Bug Out Bag allows you quickly grab what you need should you be forced to evacuate during a disaster. Most experts suggest that your BOB should contain enough supplies to last for at least seventy-two hours. Since most major disasters often disrupt services and normal life for longer than 72 hours, we think it is a good idea to have a Bag that will allow you survive for an indefinite period of time. Make sure your Bag is built to fit your needs; some people may need items that are not listed on this list.

General Service Respirator History[edit] Design work started in 2000, and from the outset the GSR was designed to function better than the S10 in "hot, high and dry" environments whilst still keeping the S10's qualities in the temperate environments of Europe it was originally designed for. It was also designed to be worn for longer periods than the S10, having been designed for 24 hours of continuous use in CBRN environments as opposed to the previous design level of 4 hours. The respirator was officially adopted into service with the Armed Forces on 26 August 2010, and training started during 2011, with British Forces Germany being first to field them.

Bug Out Bags for Women The Survivalist is often envisioned being a man. But many of those how are Survivalist or Preppers are women, blogs like The Survival Mom, Survival Goddess and Letters From an Urban Trench are just three examples of this. Both men and women has the same basic need when it comes to Survival so the other articles about Bug Out Bags (BOB:s) are just as relevant to women as for men. The purpose of this article is mainly to show discuss the small difference that exists between women and men and show some of the products that are especially designed for women. It’s up to you First of all: A Bug Out Bag is a tool. Survival kit Cosmonaut's survival kit in Polytechnical Museum, Moscow Sailors take inventory of a C-2A Greyhound's life raft kit in USS Kitty Hawk (CV 63) paraloft shop Survival kits, in a variety of sizes, contain supplies and tools to provide a survivor with basic shelter against the elements, help him or her to keep warm, meet basic health and first aid needs, provide food and water, signal to rescuers, and assist in finding the way back to help. Supplies in a survival kit normally contain a knife (often a Swiss army knife or a multi-tool), matches, tinder, first aid kit, bandana, fish hooks, sewing kit, and a flashlight. Civilians such as forestry workers, surveyors, or bush pilots, who work in remote locations or in regions with extreme climate conditions may also be equipped with survival kits. Disaster supplies are also kept on hand by those who live in areas prone to earthquakes or other natural disasters.

Bug-out bag Off-the-shelf Red Cross preparedness kit . A bug-out bag[1][2] is a portable kit that contains the items one would require to survive for seventy-two hours[3][4] when evacuating from a disaster. The focus is on evacuation, rather than long-term survival, distinguishing the bug-out bag from a survival kit, a boating or aviation emergency kit, or a fixed-site disaster supplies kit. The kits are also popular in the survivalism subculture.[5] Decked Out: Zombie Apocalypse Unless you’ve been hibernating in your underground bunker for the last few weeks, you’re well aware that the zombie apocalypse is upon us (just like the Mayans predicted). We’re no suckers, we know there are a few steps we’ve got to take before any Walkers coming strolling into our neck of the woods. Besides settling on the ideal blunt object, we’ve got to have our attire in order. This is what we’re thinking. 1.

Top Post-Collapse Barter Items and Trade Skills by Brandon Smith by Brandon Smith Alt-Market.com The concept of private barter and alternative economies has been so far removed from our daily existence here in America that the very idea of participating in commerce without the use of dollars or without the inclusion of corporate chains seems almost outlandish to many people. However, the fact remains that up until very recently (perhaps the last three to four decades) barter and independent trade was commonplace in this country.