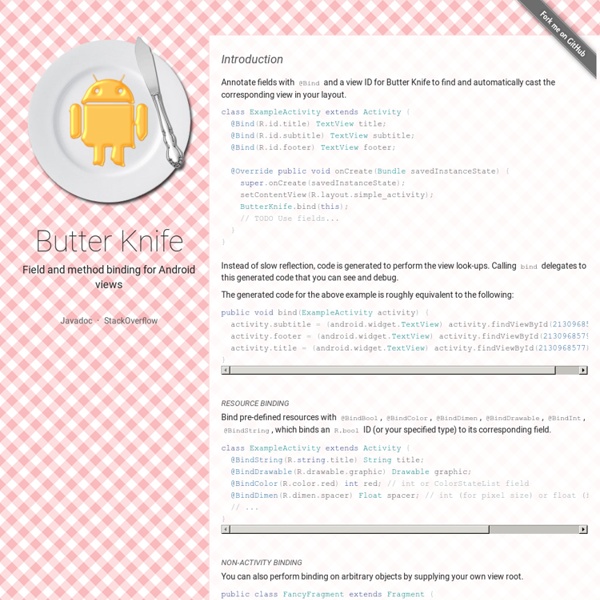 Material Design with the Android Design Support Library Material Design, a new design language that gives design guidelines for Android apps and apps on other platforms, was introduced with the release of Android 5.0 Lollipop. With it came new UI components such as the ‘Floating Action Button’. Implementing these new components while ensuring backward compatibility was typically a tedious process. Third party libraries would usually be needed to streamline the process. At this year’s Google IO conference, Google introduced the Android Design Support Library which brings a number of important material design components to developers. Android Development Tutorial 1.1. The Android operating system Android is an operating system based on the Linux kernel. The project responsible for developing the Android system is called the Android Open Source Project (AOSP) and is lead by Google. The Android system supports background processing, provides a rich user interface library, supports 2-D and 3-D graphics using the OpenGL-ES (short OpenGL) standard and grants access to the file system as well as an embedded SQLite database.

Pushing the ActionBar to the next level Back in November 2012, I wrote a blog post entitled “ActionBar on the Move”. This article was mainly dealing with a technique to nicely and uniquely animate your ActionBar. Although I mentioned some of the effect’s possible applications, I never had time to effectively add an ActionBar animation to one of my own apps nor saw an application on the Play Store taking advantage of it. While being at Google I/O last week, I finally found an application using the ActionBar animation technique. Let’s be honest, it literally blew my mind the first time I saw it.

Android Libraries and Resources 6Wunderkinder SlidingLayer for Android A library that provides an easy way to include an autonomous layer/view that slides from the side of your screen and which is fully gesture ready, the same way as our detail view in Wunderlist 2 does. This pattern can also be seen in Google+’s notification center or in Basecamp’s detail view. AChartEngine Test your application - Make Me Droid, free online Android application builder. Test your application When your application is ready and generated, you have the following choices: Publish the application directly on the Android Market (Google Play), if you have signed it.Test the application on your Android phone, if you have one.Test the application on the simulator that we provide you. The following chapters focus on using the simulator in a few easy steps: Simulator download.Launching the simulator from your PC.Connect to Make me Droid mobile website.Download and install your application. Alternatively, you can also use your own mobile phone to test your app. In this case, you can skip the simulator topics and directly read the Connect to Make me Droid mobile website paragraph. Simulator download

A Smart Way to Use Retrofit - Android Tips and Tricks Retrofit library is a type-safe REST client for Android and Java created by Square Open Source. With this library you can request the webservices of a REST api with POST, GET and more. This library is awesome and very useful, but you need a good architecture and a good practice to use it as best as possible. You can add header to every request or to specific request, which is very useful with secured webservices. For deserialization, you can use a custom JSON parser or a GSON object for automatic parsing.

13 Best Android Music Player Applications of 2015 That Worth Checking Out With the advent of smart-phones, the way of listening to music has been changed as music fans are also adopting this new way of listening to their favorite music. A lot of music player applications are obtainable on the web that can be easily downloaded in the smart-phone. Now, the one device that we carry with us becomes our primary media player. If you have an android based smart-phone, you are very fortunate as there is a very big community of developers that is well-known for developing applications allowing users to have a great experience. Today, you can find a lot of music player applications at Google Play Store, but it is important for you to choose carefully for your needs. However, it is not possible to look at all of them that are obtainable, so below you can find 13 best apps of 2015 that are worth checking out for you:

Loosely coupled In-app communication in Android – Mickael's Android Playground When designing an application, I had a problem with my fragments’ interaction. I decided to let my activity hold every information important to my Application, and let the fragments access those data directly via the Activity. The problem is that Fragments and Activities aren’t supposed to be that tightly coupled. A fragment is supposed to be independent from its activity lifecycle, and we’re going to see why… Be careful with your Bundles. Ok, just imagine that you have your Activity, that holds some API result information.

Android MediaPlayer Tutorial Android provides many ways to control playback of audio/video files and streams. One of this way is through a class called MediaPlayer. Android is providing MediaPlayer class to access built-in mediaplayer services like playing audio,video e.t.c. In order to use MediaPlayer , we have to call a static Method create() of this class. This method returns an instance of MediaPlayer class. Its syntax is as follows − Memory Analysis for Android Applications [This post is by Patrick Dubroy, an Android engineer who writes about programming, usability, and interaction on his personal blog. — Tim Bray] The Dalvik runtime may be garbage-collected, but that doesn't mean you can ignore memory management. You should be especially mindful of memory usage on mobile devices, where memory is more constrained. In this article, we're going to take a look at some of the memory profiling tools in the Android SDK that can help you trim your application's memory usage.