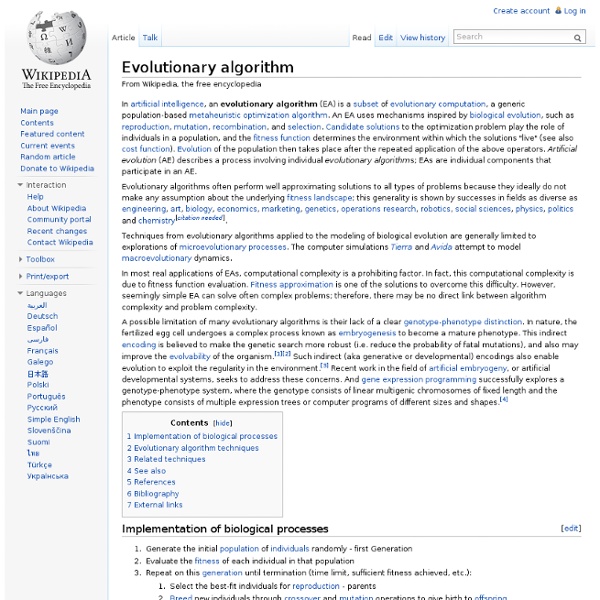 Evolutionary algorithms often perform well approximating solutions to all types of problems because they ideally do not make any assumption about the underlying fitness landscape; this generality is shown by successes in fields as diverse as engineering, art, biology, economics, marketing, genetics, operations research, robotics, social sciences, physics, politics and chemistry[citation needed]. In most real applications of EAs, computational complexity is a prohibiting factor. In fact, this computational complexity is due to fitness function evaluation. Fitness approximation is one of the solutions to overcome this difficulty. However, seemingly simple EA can solve often complex problems; therefore, there may be no direct link between algorithm complexity and problem complexity. A possible limitation [according to whom?] Implementation of biological processes[edit] Evolutionary algorithm types[edit] Related techniques[edit] Swarm algorithms, including: [edit] See also[edit] References[edit]

Artificial neural network An artificial neural network is an interconnected group of nodes, akin to the vast network of neurons in a brain. Here, each circular node represents an artificial neuron and an arrow represents a connection from the output of one neuron to the input of another. For example, a neural network for handwriting recognition is defined by a set of input neurons which may be activated by the pixels of an input image. Like other machine learning methods - systems that learn from data - neural networks have been used to solve a wide variety of tasks that are hard to solve using ordinary rule-based programming, including computer vision and speech recognition. Background[edit] There is no single formal definition of what an artificial neural network is. consist of sets of adaptive weights, i.e. numerical parameters that are tuned by a learning algorithm, andare capable of approximating non-linear functions of their inputs. History[edit] Farley and Wesley A. Recent improvements[edit] Models[edit] and .