A world of tweets 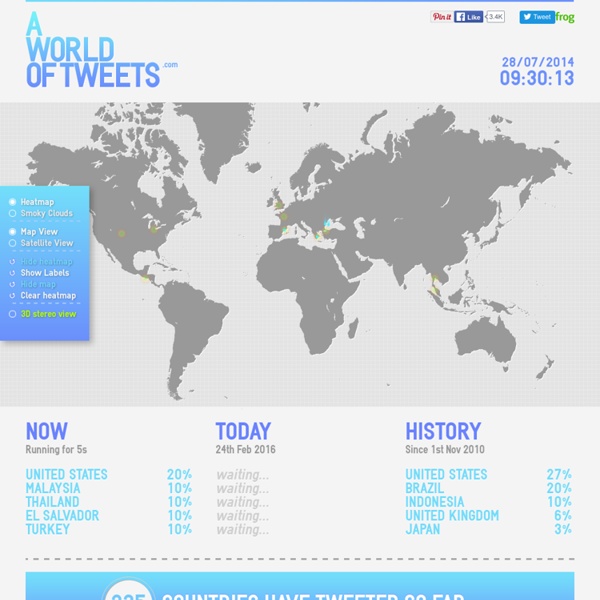 Real-time visualization of geolocated tweets around the world A World of Tweets is all about playing with geography and bits of information. Simply put, A World of Tweets shows you where people are tweeting at from the past hour. The more tweets there are from a specific region, the "hotter" or redder it becomes. This continuous collection of Twitter statuses also allows for the presentation of other interesting visuals as well as statistical and historical data about the tweeting world we live in. Through the activity of Twitter users it is possible to tailor a new map of the world that evolves during the day according to the timezones and the spreading of mobile technologies.

World Sunlight Map Watch the sun rise and set all over the world on this real-time, computer-generated illustration of the earth's patterns of sunlight and darkness. The clouds are updated daily with current weather satellite imagery. The Mercator projection used here is one way of looking at the spherical earth as a flat map. With Data Viz And GPS, Fuseproject Remakes The Game Of Golf Cyclists have Strava. Skiers have EpicMix. Even casual athletes have devices like Fuelband. Golf, on the other hand, is different. Chalk it up to the culture, the tradition, or the fairly small market of people who tee off with regularity, but golf has been fairly untouched by the advent of wearable technologies.

60+ Twitter Tools On Web Twitter is my favorite microblogging service, i’ve made a list of Twitter tools on web . Thank’s to all developers who has developed all these tools, they are cool and very nice.. . Not all of these tools good for your business or blog, my favorite is Twitterfeed , i dont need WordPress plugins anymore to automatic post my new blog entries to Twitter. VIPFollowers.com – a tools website for twitter. Here you will gain more followers for your account. A Super-Simple Tool to Search Instagram by Time and Location Originally published by Al Shaw on ProPublica on 3 May 2013 under a Creative Commons Attribution licence. This week, Justin Elliott wrote about new House Financial Services Committee chairman Rep. Jeb Hensarling (R-Texas) attending a weekend getaway with banking industry officials. One of the ways he found out who was at the getaway was by using the Instagram photo sharing service, which turned up a snowy snapshot taken by Len Wolfson, a lobbyist for the Mortgage Bankers Association (which had contributed to Hensarling's PAC). Wolfson has since set his account to private. The Instagram site has no search function, so finding shots like this can take a lot of digging.

Map Tunnelling Tool Tunnel to the Other Side of the Earth Have you ever wondered which part of the other side of the earth is directly below you? Find out using this map tunnelling tool. Map Tunnelling Tool This New Model For How You Use Electricity Could Save You Big Many utilities charge more for power during the day, when most people are using the grid, and less at night, when people are asleep. So, if you want to cut energy consumption, it makes sense to switch more activities to the wee hours. Ford already offers a "value charging app," so its plug-in vehicle users can automatically charge up when the price is lowest. But the car-maker isn’t satisfied with that part of the energy bill, only.

Are Most Major Brands’ Twitter Followers Fake? Despite talk of measuring “engagement” and “interactions,” success on social platforms is often crudely judged by the size of the audience a brand has amassed. (Digiday has been guilty of this.) But on Twitter, marketers are talking to far fewer people than they think, according to data gathered from Status People’s Fake Follower Checker. According to the tool, over half the followers of the world’s 20 largest brands are either fake or inactive.