Crows could be the key to understanding alien intelligence 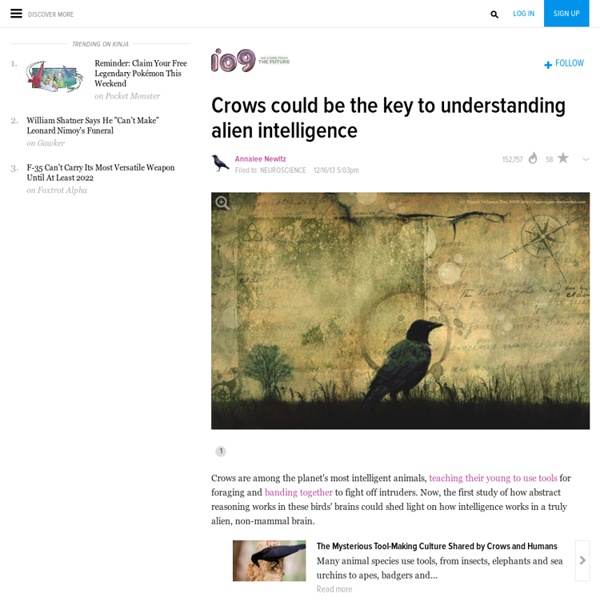 But seriously, Annalee.... We're all ready for you to write the definitive science fiction novel about crows. In fact, you've been teasing us all far too long now :-) Write it already! Flagged I'm just gonna leave this here....

Sight, Sound Out of Sync in Kids With Autism Says Study The new diagnostic term “autism spectrum disorder” doesn’t reflect how devastating it can be for parents to have children limited in their ability to communicate and show affection, but it does reflect how little is still known about the condition that affects roughly 2 percent of children in the United States. Doctors have made great strides in accurately describing and diagnosing autism, but its causes remain opaque. A recent Vanderbilt University offers neurological findings that help explain for the disorder’s seemingly disparate symptoms. The study, published in January in the Journal of Neuroscience, found that children with autism have a broader window of time than normal children during which their brains process two distinct sensory stimuli as aspects of the same event. The window exists to allow the brain to connect stimuli, for example the sound of the sight of the same action, arriving at slightly different times.

This famous brain was cut into 2,400 slices and uploaded to the cloud Good thing this guy wasn't on staff. SExpand This is one of the movies I know by heart, and I promise people every time that if we watch it, I won't quote along. I lie. Doesn't matter how many times I've seen it, I'm always too busy laughing. Except the Putting on the Ritz part. This movie has to be somewhere in my top ten list. that's me with Spaceballs! At risk of opening Pandoras box... you have a fave quote? Oh good, because if you don't quote it, I will. "That's right! "Taffeta, darling." "Taffeta, sweetheart." "No, the dress, it's taffeta—it wrinkles so easily." and "...the other one is just for socks and poo-poo undies." Madeline Kahn is my personal hero, and I adore her so much in this movie. And this is probably my favourite scene: I still ask people if they want Ovaltine, in her voice. I also say "the staircase can be treacherous" a lot, whenever I'm in a dim or darkened place.

Scientific evidence that you probably don’t have free will I might note that you're citing experiments, which while not entirely debunked are in many circles considered to be highly flawed. For example, the "when did you decide to move your finger," experiment. This experiment is considered flawed because moving your finger is purely a motor response, and an incredibly simplistic one at that. The motion of our hands is one of the things we have the least control over, we're constantly twitching, scratching itches, or simply stretching our fingers out without realizing it. This however, is entirely different from decisions that by necessity require a great deal of forethought. Actually, I read up on this subject a little about a week ago, and found a fairly decent article on the subject. PS: io9, did you guys see that I was just arguing free will earlier today on another posts comment board?!

Inside Paul Allen's Plan to Reverse-Engineer the Human Brain - Wired Science In 2003, Microsoft cofounder Paul Allen spent $100 million to build the Allen Institute for Brain Science in Seattle. With laser-equipped microscopes and custom brain-slicers, the institute has mapped the brains of mice, monkeys, and humans, showing which genes are turned on—and where—to better understand vision, memory, autism, and other neural phenomena. Last year Allen ponied up another $300 million to aim the institute at a narrower but more ambitious goal: a complete understanding of how the mouse brain interprets visual information. To succeed, they’ll have to go beyond static gene maps and learn how to watch a living brain in action. The new method will track electrical activity in neurons—not just in one mouse but many. Of all the things you could have invested in, why brain research? Well, as a programmer you’re working with very simple structures compared to the brain. How do you think your investment has paid off so far? Oh, I think it’s had a real impact.

Brains flush toxic waste in sleep, including Alzheimer’s-linked protein, study of mice finds Scientists say this nightly self-clean by the brain provides a compelling biological reason for the restorative power of sleep. “Sleep puts the brain in another state where we clean out all the byproducts of activity during the daytime,” said study author and University of Rochester neurosurgeon Maiken Nedergaard. Those byproducts include beta-amyloid protein, clumps of which form plaques found in the brains of Alzheimer’s patients. Staying up all night could prevent the brain from getting rid of these toxins as efficiently, and explain why sleep deprivation has such strong and immediate consequences. Although as essential and universal to the animal kingdom as air and water, sleep is a riddle that has baffled scientists and philosophers for centuries. One line of thinking was that sleep helps animals to conserve energy by forcing a period of rest. Another puzzle involves why different animals require different amounts of sleep per night.

Humans, Version 3.0 Credit: Flickr user Suvcon Where are we humans going, as a species? If science fiction is any guide, we will genetically evolve like in X-Men, become genetically engineered as in Gattaca, or become cybernetically enhanced like General Grievous in Star Wars. All of these may well be part of the story of our future, but I’m not holding my breath. Genetic engineering could engender marked changes in us, but it requires a scientific bridge between genotypes—an organism’s genetic blueprints—and phenotypes, which are the organisms themselves and their suite of abilities. And machine-enhancement is part of our world even today, manifesting in the smartphones and desktop computers most of us rely on each day. Simply put, none of these scenarios are plausible for the immediate future. There is, however, another avenue for human evolution, one mostly unappreciated in both science and fiction. Neuronal recycling exploits this wellspring of potent powers. But how do I know this is feasible?

Laser creates 'false memories' in fly brains - life - 15 October 2009 Video: Tracking fruit flies A flash of laser light can alter the brains of fruit flies so that they learn to fear pain that they never actually felt. Gero Miesenböck at the University of Oxford and his colleagues genetically engineered fruit flies so that a handful of their nerve cells fired when lit up with a laser. This allowed them to write false pain "memories" into the fruit flies' brains. "These memories cause a lasting modification of the flies' behaviour," says Miesenböck. It is known that the release of dopamine by neurons in the "mushroom body" – part of the fruit fly brain – is critical to learning. Lessons in pain To investigate, Miesenböck and his colleagues started by putting ordinary fruit flies into a small chamber while two different odours were pumped in from either end to create two separate odour streams. Bright ideas The team then made these P2X2 neurons light-sensitive by injecting the flies with a form of ATP that is activated only by a laser. Like fly, like human?

How and where imagination occurs in human brains Philosophers and scientists have long puzzled over where human imagination comes from. In other words, what makes humans able to create art, invent tools, think scientifically and perform other incredibly diverse behaviors? The answer, Dartmouth researchers conclude in a new study, lies in a widespread neural network -- the brain's "mental workspace" -- that consciously manipulates images, symbols, ideas and theories and gives humans the laser-like mental focus needed to solve complex problems and come up with new ideas. Their findings, titled "Network structure and dynamics of the mental workspace," appear the week of Sept. 16 in the Proceedings of the National Academy of Sciences. "Our findings move us closer to understanding how the organization of our brains sets us apart from other species and provides such a rich internal playground for us to think freely and creatively," says lead author Alex Schlegel , a graduate student in the Department of Psychological and Brain Sciences.