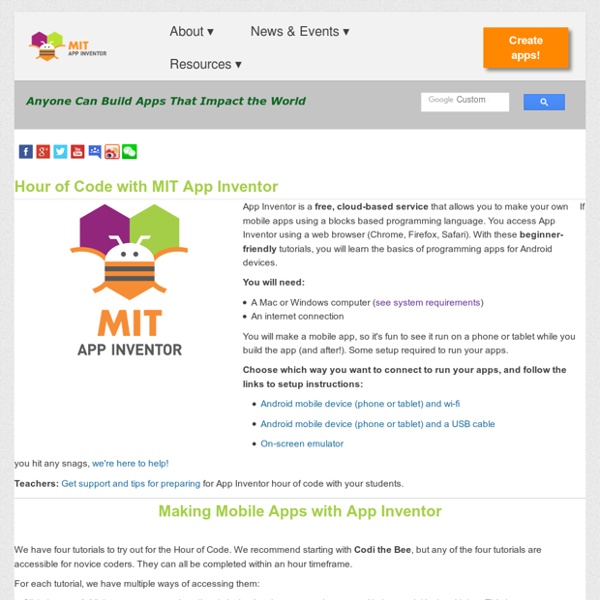 Follow these four short videos and you'll have three working apps to show for it! After building the starter apps, which will take around an hour, you can move on to extending them with more functionality, or you can start building apps of your own design. Get started now with Video 1 below. Trouble with the Text-To-Speech player on your phone? Get help here. What's Next? You just made some pretty cool apps! See the full collection of Tutorials for more ideas.

Tons of Classroom Examples Using Augmented Reality with @Aurasma - A Complete How-To Guide! How to Use Augmented Reality in Your Classroomthis post is read best via a desktop due to the embedded video content Augmented reality allows someone to add another layer to an existing image. For example, imagine holding your phone over a poster on the wall as if you were going to take a photo of that poster, and then instantly a video starts playing to offer you additional information about that particular poster. Pretty cool, right? The first time it happens, it seems like magic. Augmented Reality and Applications for Education – Part 2 Guest post by James Roberts. Though many would say that augmented reality is destined to play a role in the future of education, others would point out that it’s already here. Here is a lowdown on what Augmented Reality is and some ways it can be used in the classroom. Augmented Reality (AR) is the combination of reality and virtual reality, and allows you to put 3D content and images into the real world. AR has many applications in various fields from military training to education. Augmented reality provides a richer learning experience for the student, providing a extra element of visual/physical context that makes learning more interactive.

Augmented Reality in Education String Augmented reality is a 3D learning environment which connects real and virtual world. It provides interactive tools for learning, and fosters informal learning. Besides, augmented reality increases motivation and engages learners. Above all, augmented reality is good for kinesthetic learners; it enables learners participate interactively with computer generated simulations. 20 Ways to Use Augmented Reality in Education Second Life proved an incredibly valuable tool for educators hoping to reach a broad audience — or offering even more ways to learn for their own bands of students. Augmented Reality Development Lab: Affiliated with Google, Microsoft, and Logitech, the Augmented Reality Development Lab run by Digital Tech Frontier seeks to draw up projects that entertain as well as educate. The very core goal of the ARDL involves creating interactive, three-dimensional objects for studying purposes. Reliving the Revolution: Karen Schrier harnessed GPS and Pocket PCs to bring the Battle of Lexington to her students through the Reliving the Revolution game, an AR experiment exploring some of the mysteries still shrouding the event — like who shot first! Players assume different historical roles and walk through everything on a real-life map of the Massachusetts city.

Coding Across the Curriculum "I think everybody in this country should learn how to program a computer because it teaches you how to think." - Steve Jobs The above quote is on the homepage of the coding website Tynker. Coding, formerly known as programming (I still remember teaching myself BASIC on my Commodore 64 back in the '80s!), has once again returned to classrooms nationwide. A range of high-profile individuals, including Mark Zuckerberg, Bill Gates, Dr. Oz and Ashton Kutcher, among others, have lent their support to Code.org, a non-profit that advocates a return to coding in the classroom. What QR Codes Can Do For You! During one of my workshops this afternoon at Carondelet High School some asked for suggestions about using QR codes. Here are some of the uses that I suggested. TagMyDoc is a tool that allows you to apply a QR code to Word documents and PDFs that are stored on your computer. Upload your document then TagMyDoc creates and applies a QR code to it. You can print the document with the QR code on it or simply project the QR code for your students to scan and get a copy of the document on their mobile devices.

Awesome Websites to Get Your Kids Hooked on Programming - TheITBros The success stories of people who used MOOCs (Massive Open Online Courses) to pick up new skills and even change careers aren’t exactly rare nowadays. You probably have heard of people learning how to code by signing up for classes on sites like Coursera, eDX, and Udacity, then leveraging the knowledge that they’ve gained to find jobs and/or internships. But what if your ten-year old kid expresses an interest in becoming a computer programmer? Using Games for Learning: Practical Steps to Get Started Joan Ganz Cooney Center Part 19 of MindShift’s Guide to Games and Learning By now, you’ve probably read enough to be convinced that it’s worth trying games in your classroom.

Quest - Write text adventure games and interactive stories Quest lets you make interactive story games. Text adventure games like Zork and The Hitchhiker's Guide to the Galaxy. Gamebooks like the Choose Your Own Adventure and Fighting Fantasy books. You don't need to know how to program. Rubrics and Rubric Makers Super Rubric Makers - Print Them Instantly! - All K-12 Subjects View Now... Premade Rubrics