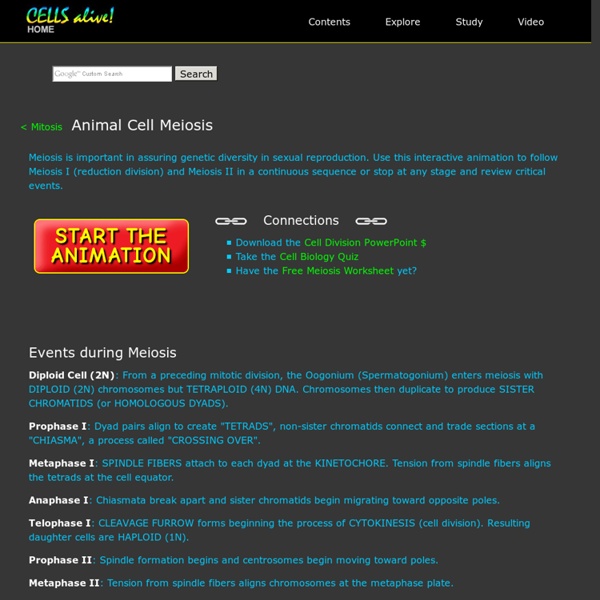 Mitosis: An Interactive Animation This animation demonstrates the stages of mitosis in an animal cell. Use the control buttons along the bottom to run the complete animation. Click on any intermediate stage (for example, Anaphase), and see a representative still frame. Interphase: Cells may appear inactive during this stage, but they are quite the opposite. This is the longest period of the complete cell cycle during which DNA replicates, the centrioles divide, and proteins are actively produced. For a complete description of the events during Interphase, read about the Cell Cycle.

GMO Quiz See correct answers Special thanks to Gregory Jaffe, the director of the Project on Biotechnology for the Center for Science in the Public Interest (“CSPI”), a non-profit consumer organization located in the United States, for his help fact checking our quiz. He is a recognized international expert on agricultural biotechnology and biosafety and has published numerous articles and reports on those topics. Photo credits: Cell Function: Mitosis Eventually cells need to duplicate. There are two main methods of replication, mitosis and meiosis. This tutorial will talk about mitosis. The big idea to remember is that mitosis is the simple duplication of a cell and all of its parts. It duplicates its DNA and the two new cells (daughter cells) have the same pieces and genetic code. Two identical copies come from one original.

Polygenic Traits Are all people either short or tall? Unlike Mendel's peas, people do not all fall into two categories: short or tall. Most people, in fact, are somewhere in between. Obviously, Mendel's rules are too simple to explain the inheritance of human height. Polygenic Traits Cell Function: Meiosis What are the big ideas here? There are two cell divisions. Mitosis has one division and meiosis has two divisions. You still have to remember PMATI, but now you do it twice. You also need to remember that four cells are created where there was originally one. That's four (4) cells with half of the amount of DNA needed by a cell.

Genetic Timeline Genetic Timeline Grade Level 9-12 The genetic timeline gives the student an historical perspective of the discoveries that led to our present understanding of the human genome. Students will learn about scientists from many different countries building a body of knowledge over a period of more than 100 years. Asexual Reproduction vs Sexual Reproduction - Difference and Comparison Moon Jellies has two main stages in its life cycle – polyp stage (asexual reproduction) & medusa stage (sexual reproduction) Types There are several different types of asexual reproduction. These include budding, where the offspring grows out of the body of the parent, and gemmules, where the parent releases a specialized mass of cells that will become a new individual.

Mutations Mutations Mutation is a change in DNA, the hereditary material of life. An organism's DNA affects how it looks, how it behaves, and its physiology — all aspects of its life. So a change in an organism's DNA can cause changes in all aspects of its life. Mitosis and Meiosis - Comparison Chart, Video and Pictures Cells divide and reproduce in two ways: mitosis and meiosis. Mitosis is a process of cell division that results in two genetically identical daughter cells developing from a single parent cell. Meiosis, on the other hand, is the division of a germ cell involving two fissions of the nucleus and giving rise to four gametes, or sex cells, each possessing half the number of chromosomes of the original cell. Mitosis is used by single-celled organisms to reproduce; it is also used for the organic growth of tissues, fibers, and membranes. Meiosis is found in sexual reproduction of organisms.

ASHG Lesson Plans Posted 1/5/2015 Developed by ASHG Staff L1: Short Tandem Repeats...and Murder! (Short Version) This lesson begins with a brief introduction to DNA Forensics and the most common technique currently in use, analysis of short tandem repeat (STR) loci. Genetics and Meiosis Games and Virtual Labs Genetics and Meiosis Genes are passed on from one generation to the next! Learn how this occurs through fun, interactive games and activities that explore genetics and meiosis! Genetics Video Games, Virtual Labs & Activities Snurfle Meiosis and Genetics 2: Diversity and Dihybrid Crosses When Snurfles reproduce, their offspring can have a lot of different traits (lots of diversity).

Reebops: A “Model” Organism for Teaching Genetic Concepts Grades: 3-5 6-8 9-12 Students create imaginary creatures, called “Reebops,” to explore the relationships between genes and inherited traits. Using Reebops as a model, students learn how hereditary information is passed from one generation to the next, and how the physical appearance of offspring is determined from the combinations of genes received from parents. By the end of this activity, students will be able to demonstrate why two parents can produce offspring whose characteristics resemble those of the parents but also demonstrate individual variation. Classroom Resources Many say that our culture is obsessed with sex, and uses sexual references to sell everything from fragrances to cars. And wouldn't life be dull without it? Yet from the viewpoint of evolutionary theory, sex isn't the most efficient way of reproducing.