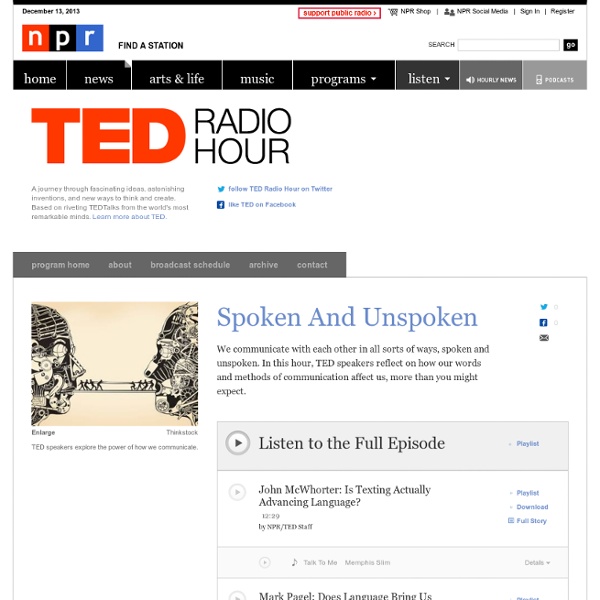 Michelle Knight on Ariel Castro abduction: 'I knew that nobody would look for me' – video | World news It's been a year since Michelle Knight, Amanda Berry and Gina DeJesus were rescued from the house of Ariel Castro in Cleveland, Ohio, where they had been held prisoner for years. In an extensive interview, Knight tells Simon Hattenstone how she survived 11 years of horrendous abuse in captivity, and how she is trying to put her life back together again. Hattenstone's full interview with Michelle Knight will be published on Saturday. Finding Me, A Decade of Darkness, a Life Reclaimed by Michelle Knight is published in the UK and US by Weinstein books at £12.99. To order a copy for £9.99 with free UK p&p go to the Guardian Bookshop. The book is also available in the US on Amazon

Interview With Linguist David Peterson — Making Game of Thrones The Common Tongue is spoken in Westeros, but that's not the case across the Narrow Sea. Missandei's translations for Daenerys and her entourage are the work of David Peterson, the linguist who created Dothraki, High Valyrian and multiple dialects of Low Valyrian. By his own estimate, Peterson has crafted over 5,000 words. Peterson shares the unique challenges of creating languages for the show, writing dialogue for Dany and what 'Monty Python' has to do with Meereen. HBO: How did the culture of Essos influence you the languages you created? David Peterson: Two major factors come into play. The second factor is their level of technology. HBO: Was your process similar for creating Valyrian? David Peterson: Valyrian is a very different type of language. In that sense, it's been difficult for me. That isn't the same with the Low Valyrian speakers. HBO: Can you give an example where High and Low Valyrian differ?

St Vincent | Yen On the weirdo late-night scene of downtown New York, Annie Clark kneels, leans over a table and takes in a big, fat line. Only it’s not cocaine. It’s the crumbled down remains of a piece of the Berlin Wall. With her moonlight antics laid bare, 31-year-old Clark continues to be one of the most captivating musicians around. Like her niece, Clark’s childhood was fostered by musical relatives. These days she has a solo career as St. She ain’t kidding. Clark started to pen this album just 36 hours after coming home from a year and a half on tour. St. If you have gotten to the bottom of this article you have unlocked a bonus feature! Black and white photo: Joshua Mellin Tags: Annie Clark, Birth in Reverse, St Vincent, vivid

Archives Registered users can download any material without charge; online registration is quick -- and free. Unregistered users may download the editorial and covers, and are then asked to subscribe to access the entire volume. Subscription is free! Every item for download is a Portable Document Format (PDF) and can be viewed with Adobe's Acrobat, Apple's Preview, and other software. The files at the bottom under BIOLINGUISTICS are two-fold: (i) The first three files contain the front cover page (same as online cover) and the back cover (a formated table of contents), sandwiching the contents (in one big file). (ii) The fourth file is the entire volume as a single file (all covers and blank pages included). These files are meant to be printed and look like a journal, with odd-numbered pages on the right-hand side (if printed 2-on-1) or on the back side (if printed duplex).

Johnny Express Animated Short Cartoon This short animation from Kyungmin Woo at South Korea's Alfred Imageworks starts off looking cute as hell. In it, an oblivious employee of the Johnny Express galactic delivery service begrudgingly wakes up after landing on an apparently desolate planetoid. He looks around for a package's recipient, totally unaware that below his feet is a sprawling civilization of tiny purple creatures. And, that's when the massacre of the local population begins. Just watch: You could read it as commentary on globalization, on the carbon cost that shipping services take on the planet, or on the butterfly effect of both military and cultural imperialism, when a foreign power's seemingly minor steps forever change the native landscape. Or, just squee or whatever.

The Emergence of Hierarchical Structure in Human Language | Language Sciences Introduction Human language appears to be a recent evolutionary development, arising within the past 100,000 years, and has not evolved in any significant way since our ancestors left Africa, about 50,000–80,000 years ago (Tattersall, 2009). If so, the human language faculty emerged relatively suddenly in evolutionary time and has not evolved since. How did this come about? In this paper we advance a novel account for the emergence of this species-specific language property. A Simple Example Shows How to Link the E and L Systems A simple question such as (1) illustrates how the Expressive and Lexical systems are linked. The phrase what occurs at the head of a sentence in an expressive “question position” but it is also semantically associated as a verbal argument in a lexical position after buy where it is given meaningful, interpretable content. Human Language Sentences Contain Two Layers of Meaning The core lexical meaning of (2) is formed from the words, John, eat, and pasta. Figure 1.

Ruth Wilson & Polly Stenham on Eleanor - Culture Talks Founded in 2011 by curator Victoria Williams and playwright Polly Stenham, the Cob Gallery in Camden has swiftly gained a reputation for intriguing and eclectic programming, producing shows by the likes of Wendy Bevan, Pete Doherty and Phoebe Collings-James. Its latest is a collaboration between its founders, the young filmmakers Alex Warren and Tobias Ross-Southall, and actress Ruth Wilson, who – alongside dancers from the Royal Ballet and musicians Blaine Harrison and Johnny Lloyd – have come together to create a unique composite work titled Eleanor. Here we speak to the individuals involved, discovering both a fascinating piece of filmography and an endeavour that serves London’s youthful artistic community. What inspired this project?Alex Warren: It was The Faithless Wife, a Leonard Cohen poem that was shown to me by a friend, and I instantly loved. Is Camden as a locale key to the heart of Eleanor? What was it that excited you about Eleanor?

Ad libitum Ad libitum is Latin for "at one's pleasure" (at liberty); it is often shortened to "ad lib" (as an adjective or adverb) or "ad-lib" (as a verb or noun). The roughly synonymous phrase a bene placito ("at [one's] good pleasure") is less common but, in its Italian form a piacere, entered the musical lingua franca (see below). Music or rhythm[edit] As a direction in sheet music, ad libitum indicates that the performer or conductor has one of a variety of types of discretion with respect to a given passage: Note that the direction a piacere (see above) has a more restricted meaning, generally referring to only the first two types of discretion. Baroque music, especially, has a written or implied ad libitum, with most composers intimating the freedom the performer and conductor have. For post-Baroque classical music and jazz, see cadenza. Ad-Libitum Promotions was the name of a club night started by DJ's Carl Deery and Peter Clitheroe at Whispers Nite Club in Bamber Bridge in 1990. Biology[edit]

Seven of the best Nirvana cover versions On the 20th anniversary of Kurt Cobain's death, the seismic influence of Nirvana's legacy continues to reverberate across the worlds of rock and pop. This weekend, Muse and St. Vincent paid their respects in separate covers of the song Lithium, from 1991’s Nevermind – the former during their headline set at Brazil’s Lollapalooza festival, and the latter while on tour in Chicago. Muse – Lithium St. Where some of the best covers succeed is in providing a new spin on a classic track; however most bands seem to revel in the opportunity to cut loose and adopt Kurt and co’s quiet-LOUD battering-ram dynamic. While Lithium was the popular choice for this weekend’s tributes, various notable artists have delved deeper into the Nirvana’s back catalogue over the years: The Flaming Lips – Pennyroyal Tea The Flaming Lips strip back their eccentric psychedelia for a cover of In Utero’s Pennyroyal Tea, with Wayne Coyne giving good throaty rasp on vocals. Lana Del Rey – Heart Shaped Box Weezer – Sliver