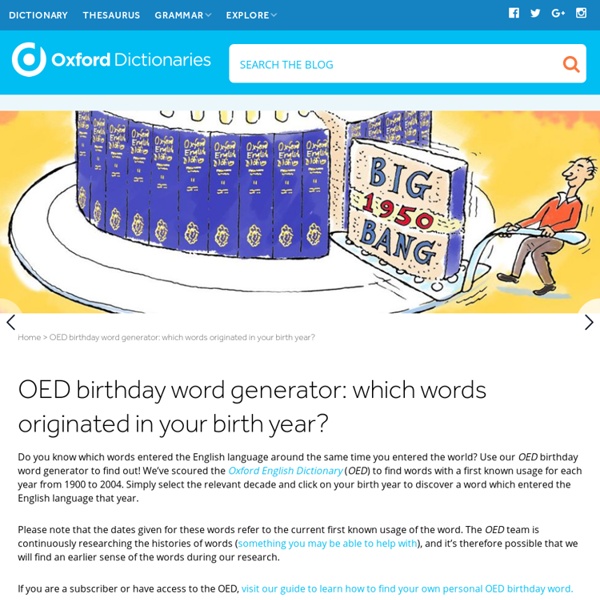 Do you know which words entered the English language around the same time you entered the world? Use our OED birthday word generator to find out! We’ve scoured the Oxford English Dictionary (OED) to find words with a first known usage for each year from 1900 to 2004. Simply select the relevant decade and click on your birth year to discover a word which entered the English language that year. Please note that the dates given for these words refer to the current first known usage of the word. The OED team is continuously researching the histories of words (something you may be able to help with), and it’s therefore possible that we will find an earlier sense of the words during our research. If you are a subscriber or have access to the OED, visit our guide to learn how to find your own personal OED birthday word. Click on your birth year in the left-hand column to discover your OED birthday word. Words originating in the 1900s include: Words originating in the 1910s include: Bollywood, n.

Editable PowerPoint Newspapers PowerPoint Template Views 925,852 Filed under Educational , Editor's pick, english, newspaper, resource, school We have just updated our popular editable PowerPoint newspapers. The top 20 words of 2013: Survey lists error code '404', 'drone' and 'fail' among the most common terms used this year Global Language Monitor tracked blogs, social networks and news sites Error code 404 and the word 'fail' were the most popular words of 2013'Surveillance' and 'drones' also made the cut, alongside 'Solar Max''Toxic politics' and other terms relating to the U.S federal shutdown were most popular phrases Pope Francis was the most commonly used name online over the past year By Victoria Woollaston Published: 14:00 GMT, 11 November 2013 | Updated: 16:03 GMT, 13 November 2013 According The Global Language Monitor the most commonly used word in 2013 was '404', which refers to a technical error code The web has been a negative place over the past year. According to research from The Global Language Monitor (GLM), the most commonly used word across the whole of the web in 2013 was 404, which refers to an online technical error code.

ePals Global Community Project: Literature Circles Students work in small groups reading a novel and assuming various roles in the Literature Circle in order to demonstrate their understanding of the novel and share... Project: Email Exchange Students will engage in an ePals email exchange, practicing the skills of collaboration and communication while building friendships and learning about the daily lives and cultures of others around the world.

25 Life Changing Lessons to Learn from Buddha “If we could see the miracle of a single flower clearly, our whole life would change.” ~ Buddha There are so many beautiful, powerful and life changing lessons I have learned from studying Buddhism and from reading many of Buddha’s quotes. And today I want to share 25 of these beautiful lessons with you. Here are 25 Life Changing Lessons from Buddha: “Hatred does not cease by hatred, but only by love; this is the eternal rule.” “A man is not called wise because he talks and talks again; but if he is peaceful, loving and fearless then he is in truth called wise.” Reading a Poem: 20 Strategies At one time or another, when face-to-face with a poem, most everyone has been perplexed. The experience of reading a poem itself is as likely to turn us off, intellectually or emotionally, as it is to move us. Unless patronized by celebrities, set to music, accompanied by visuals, or penned by our own children, poems do a terrible job of marketing themselves. All those ragged lines and affected white spaces make them appear as though they should be treated only as pieces of solemn art. Look but don’t get too close, and definitely don’t touch.

The Oxford Dictionaries Word of the Year 2013 is… It’s that time of the year again. With a fanfare and a drum roll, it’s time to announce the Oxford Dictionaries Word of the Year. The votes have been counted and verified and I can exclusively reveal that the winner is…. A picture can paint a thousand words The decision was unanimous this year, with little if any argument. This is a little unusual.

Using Primary Sources - Teachers Primary sources are the raw materials of history — original documents and objects which were created at the time under study. They are different from secondary sources, accounts or interpretations of events created by someone without firsthand experience. Examining primary sources gives students a powerful sense of history and the complexity of the past. Helping students analyze primary sources can also guide them toward higher-order thinking and better critical thinking and analysis skills.

20 mental barriers you should let go of photo by admitchell08 You are in an imaginary hot air balloon. It’s just you and all of your belongings in the wicker basket. List of fallacies A fallacy is incorrect argument in logic and rhetoric resulting in a lack of validity, or more generally, a lack of soundness. Fallacies are either formal fallacies or informal fallacies. Formal fallacies[edit] Beyond selfies and twerking … the words that really mattered in 2013 Big data This was a year in which sheer hugeness was exciting, as vividly demonstrated by Pacific Rim, Guillermo del Toro's excellent film about giant robots punching giant monsters in what passed for their giant faces. Similar thrills attended the mainstreaming of the phrase "big data", which made everyone wonder in embarrassment how they had got along with their pathetic wad of tiny data for so long.

May one stream a Netflix Video for in-class use? I have been asked more than once by a faculty member, may I stream Netflix videos to my classroom? Most Netflix videos, unless they are older films in the Public Domain, are protected by copyright. However, there are statutory exceptions that allow educators to show all or portions of films in an educational classroom. Title 17, Section 110(1) of the United States Copyright Act, for example, states educators may show a “performance… of a work… in the course of face-to-face teaching activities of a nonprofit educational institution, in a classroom or similar place devoted to instruction, unless, in the case of a motion picture or other audiovisual work, the performance, or the display of individual images, is given by means of a copy that was not lawfully made under this title, and that the person responsible for the performance knew or had reason to believe was not lawfully made. What if you invite your class over to your house and stream a movie for educational purposes?

The secret language of South Asia’s transgender community — Quartz In South Asia, there is a hidden language known only to the region’s hijra community. Found in Pakistan, India, and Bangladesh, the hijra are an old and marginalized group, whose members identify as men born with the souls of women. Hijras call themselves she-males and effigies, as well as kwaja sera, or the “guards of the harem,” a title that recalls their historical role serving monarchs in the region.

Related:
Related:  bobby1967   -  havE Fun   -  English Resources   -  Lexical Change   -  Resources for teachers   -  Language   -  life   -  Change: lexical-semantic   -  My Blackberry Is Not Working! - The One Ronnie, Preview - BBC One - YouTube   -  Nominalizations Are Zombie Nouns - NYTimes.com   -  Linguists reveal the 100 words that have shaped the English language | Mail Online   -  12 Old Words that Survived by Getting Fossilized in Idioms   -  The 10 best words the internet has given English | Culture | The Guardian   -  Loanwords in English   -  Etymology: Languages that have contributed to English vocabulary over time.