How to make people like you: 6 science-based conversation hacks 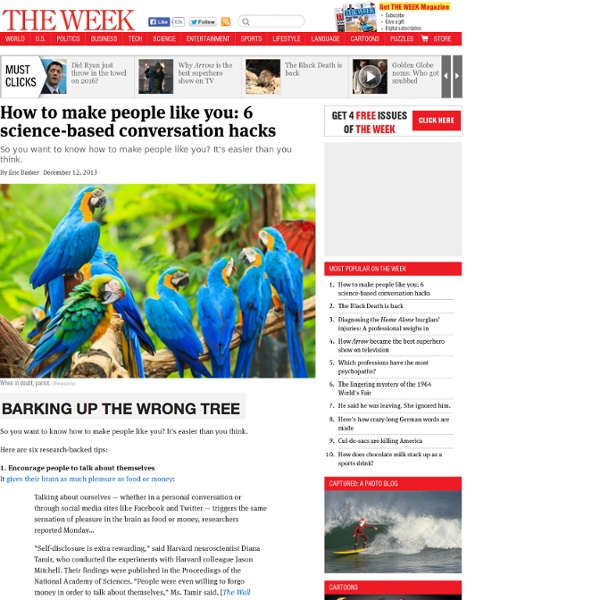 Conflict Strategies for Nice People - Liane Davey by Liane Davey | 12:00 PM December 25, 2013 Do you value friendly relations with your colleagues? Are you proud of being a nice person who would never pick a fight? Teams need conflict to function effectively. Still, I meet people every day who admit that they aren’t comfortable with conflict. Sure, pulling your punches might help you maintain your self-image as a nice person, but you do so at the cost of getting your alternative perspective on the table; at the cost of challenging faulty assumptions; and at the cost of highlighting hidden risks. To overcome these problems, we need a new definition of nice. The secret of having healthy conflict and maintaining your self-image as a nice person is all in the mindset and the delivery. To start shifting your mindset, think about your value to the team not in how often you agree, but in how often you add unique value. Here are a few tips on improving your delivery: 1. 2. 3. 4. 5.

The Steve Jobs emails that show how to win a hard-nosed negotiation The US government’s price-fixing lawsuit against Apple goes to trial next month in New York. Ahead of its court date, the US released emails that purport to show Apple was the “ringleader” in a scheme to set artificially high ebook prices with some of the largest American publishers, which have already settled the case. The emails have mostly been viewed in the context of the lawsuit, but they also provide an extraordinary view of high-stakes negotiation between the leaders of two powerful firms, Apple and News Corp. They start far apart, but over the course of five days, Apple’s then-CEO Steve Jobs successfully pulls the son of News Corp. CEO Rupert Murdoch over to his side. Jobs was a famously hard-nosed negotiator who won these kinds of battles all the time. News Corp.’s opening move It was a Friday morning, January 22, 2010. Those were the stakes as Eddy Cue, Apple’s head of iTunes and the App Store, visited executives of HarperCollins and its parent company, News Corp. Jobs digs in

Crisis Leadership: Are You Always Putting Out Fires? When I was in city management, I worked with the fire chief. A good fire chief knows how to put out fires. When the fire truck arrives at the scene of the fire, everyone’s role has previously been defined. Everyone knows what they’re supposed to do. There’s a “standard operating procedure” for just about every scenario. At the scene of a fire, there’s no time for collaborative decision-making. Crisis situations require decisive action. On the other hand, the same characteristics of leadership in a crisis situation will be ineffective and counter-productive if there is no crisis present. Ironically, some people are leading like there’s always a crisis. Non-crisis situations require collaborative action.

18 Secrets To Being Undeniably Attractive 1. Attractiveness has almost nothing to do with how you look physically, though your natural physical disposition does play a small role. It’s mostly, if not entirely, about how you put yourself together and how you behave. 2. The most basic but overlooked staple of being attractive is smelling good. 3. 4. 5. 6. 7. 8. 9. 10. 11. 12. 13. 14. 15. 16. 17. 18. Who Can You Trust? Imagine that you’re negotiating a multiyear deal to provide outsourcing services to a large company. The client tells you that her firm wants to sign on for a certain level of services, but she’d like you to be willing to deliver more on the fly, trusting that you’ll be able to work out terms for the additional resources as the need arises. Should you agree? Or imagine that a potential business partner wants to buy $12 million worth of services from you but can spend only $10 million because of temporary budget constraints. He dangles the prospect of long-term revenue opportunities in exchange for the discount but says he can’t commit to anything yet. Should you give him the deal? Situations such as these present dilemmas for any manager. The two scenarios above come from a friend of mine—let’s call him Rob—who is a partner at one of the world’s largest consulting firms. Success in business unquestionably requires some willingness to cooperate with and have faith in others.

Influential Leaders Ask These 6 Questions The key to being a powerful leader isn't giving orders -- it's extending your influence. And one important way to do that is by spreading and soliciting new ideas. As an influential leader, you are a conduit of ideas. Zig-Zag Into Interactions Many great ideas originate (or are developed) organically, often through informal interactions rather than formal meetings -- the adult version of midnight discussions in the hallway of your college dorm. What do you think about this idea I have? Rather than schedule these interactions, which can feel too formal and potentially stifling, you should budget five or ten extra minutes to zig-zag your way to meetings, lunch or even the restroom. While some of your interactions might be in-depth, most of them should simply about connecting with people for no immediate business reason. Start small: Try zig-zagging into these conversations once a week for a month ... and watch your leadership influence grow.

Fake It Till You Make It: 10 Ways To Feel Confident (Even When You Aren’t) “Original Fake” Photo Credit: courtesy of MashKulture Is your self-confidence natural, or a daily struggle? Many people’s confidence naturally wavers from day to day, leaving them too timid or confused at just the wrong time. Whether you are naturally confident or could use some better eye contact with your life, setting in place a few simple strategies goes a long way to stoke your inner confidence. If you think you’re not especially smart or capable, or that failure is a given no matter how hard you try, you’re right. And if you believe you’re brilliant and can accomplish anything you set your mind to, you’re right. Amplifying your inner confidence is like any other skill you develop; you can do it in a blink. Same with confidence. 1. 2. 3. 4. 5. 6. 7. 8. 9. 10. You don’t have to follow all 10 of these tips, but they are starters that will help you find your internal confidence and boost your sense of self belonging. Confidence is the key to EVERYTHING. Related Articles: