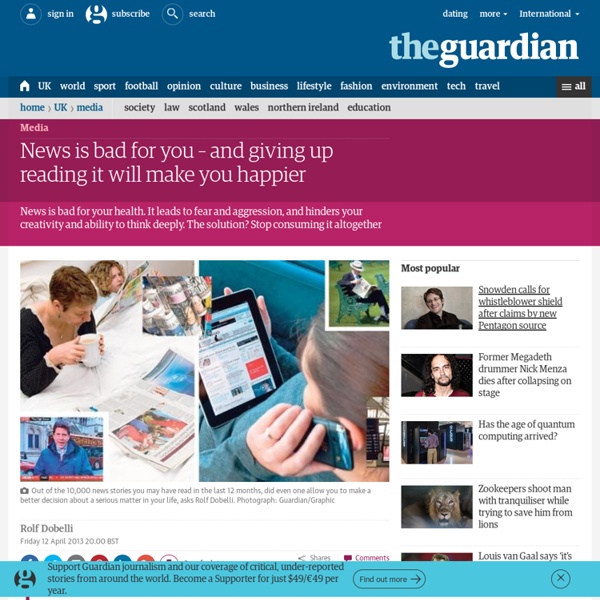 In the past few decades, the fortunate among us have recognised the hazards of living with an overabundance of food (obesity, diabetes) and have started to change our diets. But most of us do not yet understand that news is to the mind what sugar is to the body. News is easy to digest. The media feeds us small bites of trivial matter, tidbits that don't really concern our lives and don't require thinking. That's why we experience almost no saturation. Unlike reading books and long magazine articles (which require thinking), we can swallow limitless quantities of news flashes, which are bright-coloured candies for the mind. News misleads. We are not rational enough to be exposed to the press. News is irrelevant. News has no explanatory power. News is toxic to your body. News increases cognitive errors. News inhibits thinking. News works like a drug. News wastes time. News makes us passive. News kills creativity. Society needs journalism – but in a different way.

The roots of mental illness I’m going to delve into that topic that no one wants to talk about: suicide. It seems strange to me that one of the leading causes of death for young people is kept so far away from our eyes and ears. There may be a lot of sensational coverage of suicide, but maybe it’s not touching on the right issues. 40 Life Hacks That Will Change Your Life There are always these pesky little obstacles in life that make everything so difficult – pot always boiling over, zipper constantly unzipping itself or ice cream melting on your clothes. All these first world problems can easily ruin your day. Luckily, internet is full of handy life-saving tips that can help you! This awesome list of life hacks will teach you how to quickly make your beer ice cold, hammer nails without hurting yourself, keep your greedy colleagues away from your lunch, cover up dings on wooden furniture, keep your take-out pizza warm and many more!

Russia Warns Obama: Global War Over “Bee Apocalypse” Coming Soon The shocking minutes relating to President Putin’s meeting this past week with US Secretary of State John Kerry reveal the Russian leaders “extreme outrage” over the Obama regimes continued protection of global seed and plant bio-genetic giants Syngenta and Monsanto in the face of a growing “bee apocalypse” that the Kremlin warns “will most certainly” lead to world war. According to these minutes, released in the Kremlin today by the Ministry of Natural Resources and Environment of the Russian Federation (MNRE), Putin was so incensed over the Obama regimes refusal to discuss this grave matter that he refused for three hours to even meet with Kerry, who had traveled to Moscow on a scheduled diplomatic mission, but then relented so as to not cause an even greater rift between these two nations. “It is clear that these chemicals have the potential to affect entire food chains. ABC commissioned world renowned environmental toxicologist Dr. Pierre Mineau to conduct the research.

Why Suicide Has Become an Epidemic WHEN THOMAS Joiner was 25 years old, his father—whose name was also Thomas Joiner and who could do anything—disappeared from the family’s home. At the time, Joiner was a graduate student at the University of Texas, studying clinical psychology. His focus was depression, and it was obvious to him that his father was depressed. Six weeks earlier, on a family trip to the Georgia coast, the gregarious 56-year-old—the kind of guy who was forever talking and laughing and bending people his way—was sullen and withdrawn, spending days in bed, not sick or hungover, not really sleeping. Joiner knew enough not to worry. He knew that the desire for death—the easy way out, the only relief—was a symptom of depression, and although at least 2 percent of those diagnosed make suicide their final chart line, his father didn’t match the suicidal types he had learned about in school.

50 Life Hacks to Simplify your World Life hacks are little ways to make our lives easier. These low-budget tips and trick can help you organize and de-clutter space; prolong and preserve your products; or teach you something (e.g., tie a full Windsor) that you simply did not know before. Most of these came from a great post on tumblr. There is also a great subreddit ‘r/lifehacks‘ with some fantastic tips as well. 20.

Argo and the Stolen Truth About Iran This year’s Oscar-winning movie ‘Argo’ recently spurred Iran’s former president, Abolhassan Banisadr to write an article about the ‘October Surprise’. In it, he discusses the secret deal between Ronald Reagan and Ayatollah Khomeini which, by delaying the release of the hostages being held in the US embassy in Tehran, swayed the results of the 1980 US presidential election to favour Reagan over the incumbent Jimmy Carter. Banisadr argues that through ‘falsifying, misrepresenting and taking critical facts out of context,’ the film ‘delivers a pro-CIA message,’ and that by portraying Iranians as irrational and aggressive people it prepares the US public to support a war should the current nuclear negotiations fail. The day after Banisadr’s article was published, Robert Parry, who had written previously about the ‘short-sighted history of Argo’, wrote a second article supporting these arguments.

How to Land Your Kid in Therapy - Lori Gottlieb If there’s one thing I learned in graduate school, it’s that the poet Philip Larkin was right. (“They fuck you up, your mum and dad, / They may not mean to, but they do.”) At the time, I was a new mom with an infant son, and I’d decided to go back to school for a degree in clinical psychology. With baby on the brain and term papers to write, I couldn’t ignore the barrage of research showing how easy it is to screw up your kids. Of course, everyone knows that growing up with “Mommy Dearest” produces a very different child from one raised by, say, a loving PTA president who has milk and homemade cookies waiting after school. But in that space between Joan Crawford and June Cleaver, where most of us fall, it seemed like a lot could go wrong in the kid-raising department.

Economics of Blogging and Huffington Post When The Huffington Post announced earlier this week that it was being acquired by AOL for $315 million in cash and stock, one group felt slighted: a set of unpaid bloggers for the site, identifying by the Twitter hashtag #huffpuff, which claims that The Huffington Post has “built a blog-empire on the backs of thousands of citizen journalists.” Some analyses in the mainstream media have echoed these sentiments. “To grasp The Huffington Post’s business model,” wrote the Los Angeles Times’s Tim Rutten, “picture a galley rowed by slaves and commanded by pirates.” I have enormous sympathy for anyone writing about public affairs, whether as a hobby or as a career. And I’d encourage people to think very carefully about where they are doing their writing, and what they are getting paid for it.

Aaron Swartz Prosecutors Weighed 'Guerilla' Manifesto, Justice Official Tells Congressional Committee A Justice Department representative told congressional staffers during a recent briefing on the computer fraud prosecution of Internet activist Aaron Swartz that Swartz's "Guerilla Open Access Manifesto" played a role in the prosecution, sources told The Huffington Post. Swartz's 2008 manifesto said sharing information was a "moral imperative" and advocated for "civil disobedience" against copyright laws pushed by corporations "blinded by greed" that led to the "privatization of knowledge." "We need to take information, wherever it is stored, make our copies and share them with the world.

Suicide is a gender issue that can no longer be ignored Each time suicide reaches the headlines our attention is directed at particular groups – middle-aged men, people in deprived areas or in certain professions. This is splitting hairs. The latest statistics underline the message that Calm (the campaign against living miserably) has maintained for years; gender runs through UK suicide statistics like letters in a stick of rock. Four hours of concentration As I’ve blogged about before, and mentioned again in my previous post, the great mathematician and physicist Henri Poincaré put in two hours of work in the morning and two in the evening. Apparently this is a common pattern. Cal Newport mentions this in his interview with Todd Henry.