Stripcreator : make your own comic strips 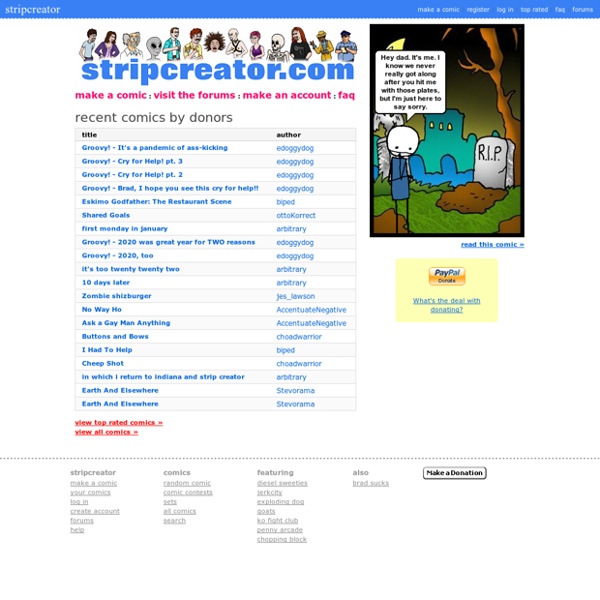 Create a new strip You are using an ancient web browser, Stripgenerator does not work properly in it.Get rid of Internet Explorer 6! Upgrade to a new version or use another browser like Chrome, Opera, Safari or Firefox. StripGenerator Say hello to manoli_martin 384,910 Members 1,059,569 Strips Hand-Drawn Coloring Book Reveals Mathematical Beauty Of Nature’s Designs With Golden Ratio Illustrations Rafael Araujo is a Venezuelan architect and illustrator. He uses nothing more than pencils, rulers, compass and protractors to create his incredibly beautiful and accurate reflections of Nature’s brilliance. Rafael’s illustrations highlight the recurrence throughout Nature of the “golden ratio”, represented by the Greek letter ϕ. Equal to approximately 1.618, the ϕ ratio lies at the heart of all manner of organic spirals, sequences and proportions – from the hypnotic whorls of the chambered nautilus shell to the balanced proportions of a butterfly’s wings. Rafael’s work is unique in that he leaves intact the construction lines that form the mathematical framework for his illustrations, each of which can take him as long as 100 hours to complete. Recently Rafael has received requests for prints of his works to color in.

Sign-up successful  Something went wrong. Maybe you already confirmed your password? If you have any doubts, please contact us: Email to tricider team About tricider Home Educational Leadership:Technology-Rich Learning:New Literacies and the Common Core A group of high school students stares intently at the famous crop-duster sequence from Alfred Hitchcock's North by Northwest. Cary Grant is standing alone at the side of a deserted highway. As film buffs know, Grant isn't alone for long; a mysterious crop-duster plane soon appears out of nowhere and begins dive-bombing him, chasing him down the road until he is forced to take cover in a cornfield. As the students watch the film, they look for moments when editing cuts have been made by the film editor.

Comic Strip Generator, Cartoon Maker, Comic Book Creator Here is the HTML code for image link to us (right click, select copy): Here is the HTML code for a text link to us (right click, select copy): <a href=" has hundreds of online image generating gadgets (banner ad maker, sign generator, label designer, custom e-cards, button creator, etc). Make your own words show up in images to use on your website or blog!</p> Storyboard - App su Google Play Storyboard transforms your videos into comics. It selects, lays out, and stylizes video frames using experimental research technology from Google that runs entirely on your device. TO USE THE APP1. Load a video.2.

Ukrainian Artist Travels The World Painting Doors In Watercolor While traveling around the world, it is possible to notice one thing – none of the doors are the same. Sometimes extraordinary, outstanding and mysterious doors often are perceived as an opportunity to get into some kind of magical world. Young artist Viktoria Kravchenko draw watercolours of doors worldwide and reminds that doors can also be artwork. More info: Facebook Etherpad 255 Plugins 105 Languages Hundreds of Instances Millions of users Collaborating in really real-time Place A Cylindrical Mirror On These Drawings And They Instantly Come To Life István Orosz is a Hungarian artist who is known for his use of the technique anamorphosis. Orosz will create a drawing, that at first glance could seem abstract. It is not until he places a cylindrical mirror on the artwork that the illustration comes to life. Sometimes, hidden pictures are revealed, or the image itself is totally transformed. He has combined several drawings to complete a whole picture as well. He attended school for graphic design, but after graduation began to design for the theatre and animated films.

Make a character Please select one of the following options: If someone is bothering you, use the Ignore button to block them. They won’t be able to contact you or comment on your strips and you won’t see their comics anymore. See how to ignore someone Muvizu Education Back to Shanghai 10 May 2016 Paul Collimore, Commercial Director at Muvizu holds a language class in Shanghai using our 3D interactive software, Muvizu Education. On one of our recent trips to Shanghai, Muvizu Education was used to explain and explore the use of language with huge success. The children loved using the animation software to tell their own stories and share their learnings on language. The children took to the technology effortlessly and great results were achieved whilst plenty of fun was had - a perfect combination for learning!