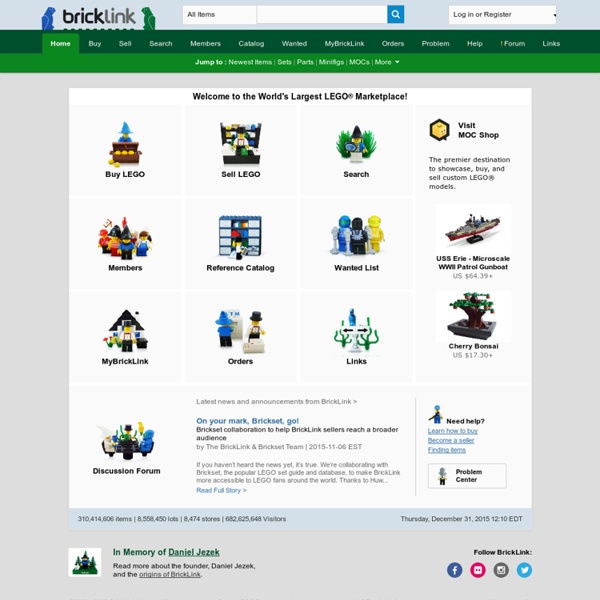 We are thrilled to officially announce the launch of the BrickLink MOC Shop in May. The MOC Shop is a place where members can create, share, collect, purchase, and even sell their own custom-built MOCs. Get ready to be inspired by the builders and designers that make up the BrickLink Community! Read full story >> With the release of 2.0 in May, BrickLink will be holding monthly building challenges. These challenges are meant to encourage builders to share their models and inspire others through innovative parts usage and creative designs.

40 Impressive Robots Built with Lego Bricks Lego is the favorite game of all time not only for kids but also for adults, and what’s really makes it one of the best game ever created is its flexibility that unlocks creativity at any degree. In Hongkiat, you witnessed the flexibility though the amazing showcase, 35 Lego Mega Constructions. (Image Source: Sven Junga) Today we want to show you nothing about amazing construction, but 40 impressive Lego models which are best to describe the science fiction.

How To Disable The Red LED On The Pi Camera Module The Pi camera module includes a red LED in one corner of the PCB. This lights up when the camera is active. It’s really useful in giving a visual indication that the camera is doing something and most of the time you will be glad it is there. Dev Bootcamp Teaches Ruby on Rails To Beginners In the bay area, there are no shortage of hackathons, meetups, or coworking spaces for developers. One of the things that is lacking is a regular mentorship or teaching model that lets beginners learn the skills it takes to become a professional. Most of the developers in Silicon Valley are self-taught and are already working at a company, so it’s hard to blame them for not being able to teach anyone and everyone who wants to achieve the same status. The folks at something called Dev Bootcamp want to change that by putting together eight week “courses” on how to become a pro at Ruby on Rails, in hopes of getting them junior positions within top tier companies. It’s a brilliant model, which I’ll get into more later. First, I want to talk about what I saw when I visited the tiny office space on Market St. in downtown San Francisco.

NXT Tutorial This tutorial for LEGO Mindstorms NXT is divided in two sections. The “Essentials” are things every NXT programmer should know. Some of these movies have exercises directly under them. It’s important to do these exercises, not just assume you “get it.” The “Advanced” section is for reference purposes. When you need one of NXT’s advanced functions, check it out. Strona główna LEGO, the LEGO logo, DUPLO, LEGENDS OF CHIMA, MINDSTORMS, MIXELS and the Minifigure are trademarks of the LEGO Group. ©2014 The LEGO Group. All rights reserved. Use of this site signifies your agreement to the terms of use. TM & © DC Comics. (s14) TM & © 2014 Marvel & Subs. An Interview with Internet Policy Visionary Susan Crawford Susan Crawford is most often described as an “Internet policy visionary”, and you’d be hard-pressed to argue that title. Her CV includes the title of professor for Harvard’s Kennedy School, a visiting professor at Harvard Law, former professor at the University of Michigan Law School and a board member for ICANN among many other positions. But her true passion lies in trying to fix how we see the Internet. I caught up with Susan for a brief chat in advance of her talk at TNW Conference 2012, where she gave me a bit of insight as to how she sees the Internet, and how she hopes the rest of us will see it as well. Crawford understands that the US has a “huge problem” with its Internet services; services that she describes as being “out of proportion with the rest of the world”. “The United States is becoming a third-world nation when it comes to Internet access.”

untitled My name is Krystian Majewski. I study design in Cologne, Germany. Here, you will find projects I have created with the LEGO Mindstorms NXT set. You can contact me at kryst(at)ceeu.de. You can find my other projects on my website. JennToo Radar Inicio LEGO, the LEGO logo, DUPLO, LEGENDS OF CHIMA, MINDSTORMS, MIXELS and the Minifigure are trademarks and/or copyrights of the LEGO Group. ©2014 The LEGO Group. All rights reserved. Use of this site signifies your agreement to the terms of use. TM & © DC Comics. (s14)

Video: An introduction to yoga - Stress Management - Article - More Than Medication Think it takes years of practising yoga before you see any results? Not so says yoga teacher and trainer Annick Robinson. Follow her moves and make yoga your go-to stress-busting habit. "The word yoga comes from "to yoke"”, meaning to unite," explains Annick Robinson, fitness and yoga teacher and trainer. “So while some may think that yoga is designed to make you more flexible, it is actually meant to make you more balanced: It makes you stronger where you are weak; more supple where you are stiff. Tilted Twister Note: Tilted Twister is designed for LEGO Mindstorms NXT 1.0 (8527) Getting started Read all of this page. Run the calibration program. Run the tiltedtwister program. You should use an unscrambled cube the first time you run the program.