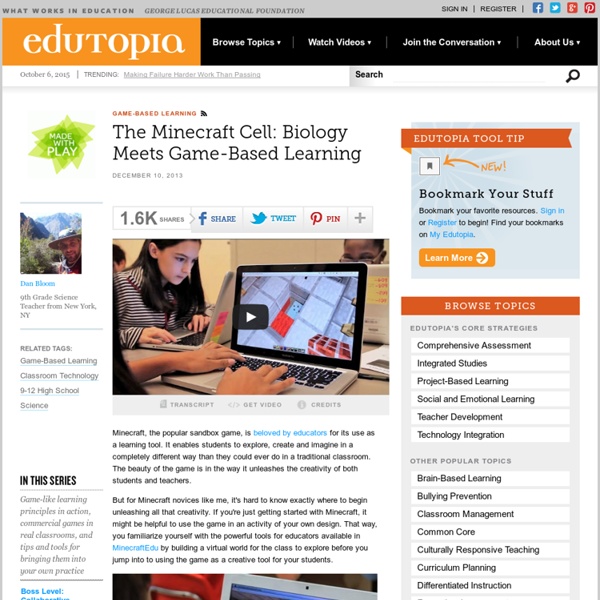 Minecraft, the popular sandbox game, is beloved by educators for its use as a learning tool. It enables students to explore, create and imagine in a completely different way than they could ever do in a traditional classroom. The beauty of the game is in the way it unleashes the creativity of both students and teachers. But for Minecraft novices like me, it's hard to know exactly where to begin unleashing all that creativity. If you're just getting started with Minecraft, it might be helpful to use the game in an activity of your own design. That way, you familiarize yourself with the powerful tools for educators available in MinecraftEdu by building a virtual world for the class to explore before you jump into to using the game as a creative tool for your students. This semester, I used Minecraft for the first time in my ninth grade science class at Quest to Learn. Step 1: Define the Learning Goals Step 2: Create the Mechanics and Build the Virtual World Step 3: Focus the Exploration

‘Minecraft’ 101: Get to Know the Blocky Blockbuster It’s official: Minecraft is now owned by Microsoft. The price? A cool $2.5 billion, which, even in a world where big money regularly flies back and forth, seems extravagant for a company with one hit video game to its credit.

The Myth of the Minecraft Curriculum In reality, the computer program "has about as much inherent educational value as an overhead projector." Everyone loves to talk about how Minecraft, the popular computer game where players build structures out of blocks, is educational. Indeed, the hype isn’t limited to people who make Pinterest boards, use Minecraft in the classroom, or writers who argue that the game teaches spatial reasoning, reading, computer programming and/or system administration. The parents I run into on a regular basis have also jumped on the bandwagon. Those conversations usually go something like this: Can Minecraft teach team building? It was October. My Introduction to Computer Science class had been meeting for two months, and we were deep into a discussion about game design. One of my students gestured casually at the student across the room. “That’s right!

Crafty Ways to Use Minecraft at School Maybe your child is one of the thousands hooked on Minecraft, a video game that lets players build with textured cubes in a virtual 3D world. Players can also explore seemingly endless worlds and time periods, gather resources, craft, and engage in combat. What you may not be aware of is the inherent educational potential of the game. Common Sense Media describes Minecraft as “an open-ended, exploration and creation focused environment…Players can create items and buildings from scratch using materials they harvest from the world around them…Kids can learn creative thinking, geometry, and even a little geology as they build imaginative block structures in this refreshingly open-ended mining and construction game.”

An Introduction to Technology Integration Sal Khan: People have been integrating technology in the classroom forever. What I think is really exciting about what we're seeing now is that technology is being used to fundamentally transform what the classroom is. Fundamentally transform what you can do with a classroom. Adam Bellow: I think to define technology integration, it's really using whatever resources you have to the best of your abilities. The Minecraft Generation In its first year, Minecraft found popularity mostly among adult nerds. But sometime in late 2011, according to Alex Leavitt, a Ph.D. candidate at the University of Southern California, children discovered it, and sales of the game exploded. Today it costs $27 and sells 10,000 copies a day. (It’s still popular across all age groups; according to Microsoft, the average player is between 28 and 29, and women make up nearly 40 percent of all players.) Persson frequently added new features to the game, like a “survival mode,” in which every 20 minutes evening falls and monsters attack — skeletons shooting arrows, “creepers” blowing themselves up when they get close to you — forcing players to build protective shelters. (“Creative mode” is just about making things.)

A Lesson in Digital Learning from Minecraft  How might today's technology eco-system further meaningful, progressive education? This question was posed by Dr. Mimi Ito during her plenary, The Digital Revolution, at The Future of Learning Institute this past July at the Harvard Graduate School of Education. As Dr. Ito pointed out, most learning technologies reinforce traditional models of instruction. They may seek to teach, but they do little to foster purposeful learning.