What Happened On Easter Island — A New (Even Scarier) Scenario : Krulwich Won... 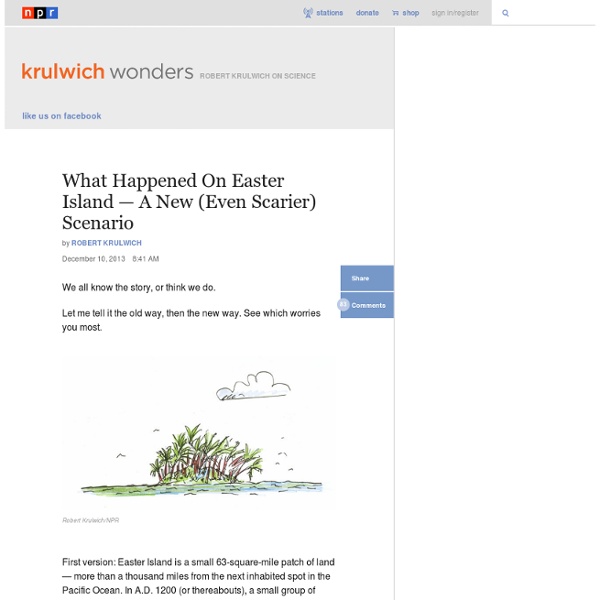 We all know the story, or think we do. Let me tell it the old way, then the new way. See which worries you most. Robert Krulwich/NPR First version: Easter Island is a small 63-square-mile patch of land — more than a thousand miles from the next inhabited spot in the Pacific Ocean. These settlers were farmers, practicing slash-and-burn agriculture, so they burned down woods, opened spaces, and began to multiply. As Jared Diamond tells it in his best-selling book, Collapse, Easter Island is the "clearest example of a society that destroyed itself by overexploiting its own resources." When Captain James Cook visited there in 1774, his crew counted roughly 700 islanders (from an earlier population of thousands), living marginal lives, their canoes reduced to patched fragments of driftwood. And that has become the lesson of Easter Island — that we don't dare abuse the plants and animals around us, because if we do, we will, all of us, go down together. A Story Of Success? Success? I wonder.

Aztec Mythology: Gods and Myth The first sun, the watery sun, was carried off by the flood. All that lived in the world became fish. The second sun was devoured by tigers. The third was demolished by a fiery rain that set people ablaze. The fourth sun, the wind sun, was wiped out by storm. People turned into monkeys and spread throughout the hills. Sources "Aztec Gods and Religion."

Norse Mythology | The Ultimate Online Resource for Norse Mythology and Religion 9 Things Extremely Successful People Do After Work 'Have No Regrets' --Richard Branson, Founder of Virgin Group"The best advice I ever received? Simple: Have no regrets. Who gave me the advice? Mum’s the word. "If you asked every person in the world who gave them their best advice, it is a safe bet that most would say it was their mother. I am no exception. Ancient Viking code deciphered for the first time An ancient Norse code which has been puzzling experts for years has been cracked by a Norwegian runologist - to discover the Viking equivalent of playful text messages. The mysterious jötunvillur code, which dates to 12th or 13th-century Scandinavia, has been unravelled by K Jonas Nordby from the University of Oslo, after he studied a 13th-century stick on which two men, Sigurd and Lavrans, had carved their name in both code and in standard runes. The jötunvillur code is found on only nine inscriptions, from different parts of Scandinavia, and has never been interpreted before. "The thing that solved it for me was seeing these two old Norse names, Sigurd and Lavrans, and after each of them was this combination of runes which made no sense," said Nordby, who is writing his doctorate on cryptography in runic inscriptions from the Viking Age and the Scandinavian Middle Ages. "I thought 'wow, this is the system, this is the solution, now we can read this text," said Nordby.

A Killer In Your Fridge ~ Sweet Poison…A MUST READ | Rhonda Gessner In October of 2001, my sister started getting very sick She had stomach spasms and she was having a hard time getting around. Walking was a major chore. It took everything she had just to get out of bed; she was in so much pain. By March 2002, she had undergone several tissue and muscle biopsies and was on 24 various prescription medications. She put her house, bank accounts, life insurance, etc., in her oldest daughter’s name, and made sure that her younger children were to be taken care of. She also wanted her last hooray, so she planned a trip to Florida (basically in a wheelchair) for March 22nd. On March 19, I called her to ask how her most recent tests went, and she said they didn’t find anything on the test, but they believe she had MS. I recalled an article a friend of mine e-mailed to me and I asked my sister if she drank diet soda? I told her not to open it, and to stop drinking the diet soda! Well, she called me, and said her doctor was amazed! Yes! Dr. Dr.

A Lonely Quest for Facts on Genetically Modified Crops KONA, Hawaii — From the moment the bill to ban on the island of Hawaii was introduced in May 2013, it garnered more vocal support than any the County Council here had ever considered, even the perennially popular bids to decriminalize marijuana. Public hearings were dominated by recitations of the ills often attributed to genetically modified organisms, or G.M.O.s: cancer in rats, a rise in childhood allergies, out-of-control superweeds, genetic contamination, overuse of , the disappearance of butterflies and bees. To see the full article, subscribe here. Another Council member favored razing every genetically modified papaya tree on the island. But under Ms. “You’re exempted,” Mr. Even so, Mr. Many of the island’s papaya farmers, descendants of immigrants who came to work on sugar plantations, have links to the Philippines, as does Mr. If Mr. Japanese as well as American regulators had approved the papaya. Photo Mr. Superweeds and Rats But a vast majority were there in support. Mr. Dr. Dr.

10 Creatures in Scandinavian Folklore Creepy The Scandinavian Folklore consists of a huge variety of creatures, good or evil, which have frightened people for centuries. They were often meant to scare children, but even today they are essential and important to the modern northern society. Huldra (or called Tallemaja in Swedish) is a troll-like woman living in the woods. These beings are actually still very important in the modern society. Made famous by J. Mare is a female Vette, who gives people bad dreams at night by sitting on them in their sleep. Fossegrimmen, or just Grim (Foss is Norwegian for Waterfall) is a water-creature. The troll comes from Norse Mythology, inspired by the cruel giants who were the main enemies of the gods, known as jotner/jotuner/jötunn, who lived in the mountains of Utgard. The Black Death was a tragedy for all of the Scandinavian countries, Denmark lost one third of its population, while Norway lost half. Draugen, from Norse “draugr” meaning ghost.