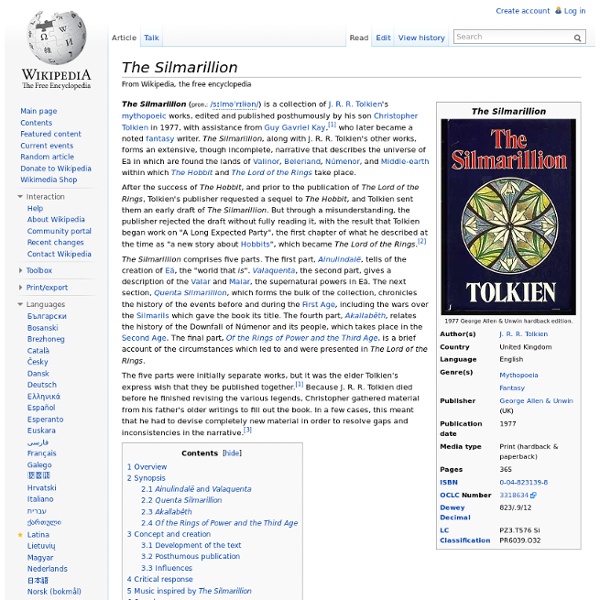 The Silmarillion /sɪlməˈrɪlɨən/ is a collection of J. R. R. Tolkien's mythopoeic works, edited and published posthumously by his son, Christopher Tolkien, in 1977, with assistance from Guy Gavriel Kay,[1] who later became a noted fantasy writer. The Silmarillion, along with J. After the success of The Hobbit, and prior to the publication of The Lord of the Rings, Tolkien's publisher requested a sequel to The Hobbit, and Tolkien sent them an early draft of The Silmarillion. The five parts were initially separate works, but it was the elder Tolkien's express wish that they be published together.[1] Because J. Overview[edit] The Silmarillion, like Tolkien's other Middle-earth writings, was meant to have taken place at some time in Earth's past.[4] In keeping with this idea, The Silmarillion is meant to have been translated from Bilbo's three-volume Translations from the Elvish, which he wrote while at Rivendell.[5] Among the notable chapters in the book are: Synopsis[edit] Akallabêth[edit]

Unfinished Tales Unfinished Tales (full title Unfinished Tales of Númenor and Middle-earth) is a collection of stories and essays by J. R. R. Unlike The Silmarillion, for which the narrative fragments were modified to connect into a consistent and coherent work, the Unfinished Tales are presented as Tolkien left them, with little more than names changed (the author having had a confusing habit of trying out different names for a character while writing a draft). The commercial success of Unfinished Tales demonstrated that the demand for Tolkien's stories several years after his death was not only still present, it was growing. Contents[edit] Part One: The First Age: "Of Tuor and his Coming to Gondolin""Narn i Hîn Húrin (The Tale of the Children of Húrin)" Part Two: The Second Age: "A Description of the Island of Númenor""Aldarion and Erendis: The Mariner's Wife""The Line of Elros: Kings of Númenor""The History of Galadriel and Celeborn" Part Three: The Third Age: Part Four External links[edit]

The Hobbit The Hobbit is a novel by J.R.R. Tolkien, set in Middle-earth. The book was first published on September 21, 1937 and is set in the years 2941 to 2942 of the Third Age before the events of The Lord of the Rings.[1] The Book J.R.R. Tolkien introduced or mentioned characters and places that figured prominently in his legendarium, specifically Elrond and Gondolin, along with elements from Germanic legend. Although a fairy tale, the book is both complex and sophisticated: it contains many names and words derived from Norse mythology, and central plot elements from the Beowulf epic, it makes use of Anglo-Saxon runes, information on calendars and moon phases, and detailed geographical descriptions that fit well with the accompanying maps. Story Bilbo Baggins, a hobbit, was smoking in his porch-way at Bag End one day, when Gandalf the Wizard visits him. The next morning, after oversleeping and nearly missing the start of the journey, Bilbo goes off with the Dwarves. Alternate version Editions

The Hobbit: Themes, Motifs & Symbols Themes Themes are the fundamental and often universal ideas explored in a literary work. Bilbo’s Heroism The Hobbit’s main theme is Bilbo’s development into a hero, which more broadly represents the development of a common person into a hero. Bilbo possesses hidden reserves of inner strength that even Bilbo himself cannot perceive when he firsts sets out on the quest. Because Tolkien acknowledged that the idea of hobbits was rooted in his experiences with rural Englishmen of his own time, Bilbo’s development might allegorically represent the heroism of England in World War I or the inner, latent heroism common to everyone. Race, Lineage, and Character The differences among Tolkien’s imaginary races are a major focus of the novel, particularly in its second half. Family lineage is another important factor that shapes identity in The Hobbit. Motifs Motifs are recurring structures, contrasts, and literary devices that can help to develop and inform the text’s major themes. Symbols Named Swords

Art Student Hand-Illuminates, Binds a Copy of Tolkien's Silmarillion This German art student, Benjamin Harff, decided, for his exam at the Academy of Arts, to do something only slightly ambitious — to hand-illuminate and bind a copy of J.R.R. Tolkien’s Silmarillion. It took him six months of work. In very 21st century elvish-monk style, he hand-illuminated the text which had been printed on his home Canon inkjet printer. He worked with a binder to assemble the resulting book. I spent a year of my life, in my youth, fancying myself some sort of modern-day monastic scribe and doing this sort of Celtic knotwork-inspired illumination and calligraphy, so I am in awe of his talent. Interview with Benjamin Harff, upcoming Tolkien illustrator and creator of the Edel-Silmarillion Gareth Branwyn Gareth Branwyn is a freelancer writer and the former Editorial Director of Maker Media. Related

The Two Towers The Two Towers is the second volume of J. R. R. Tolkien's high fantasy novel The Lord of the Rings. It is preceded by The Fellowship of the Ring and followed by The Return of the King. Title[edit] The Lord of the Rings is composed of 6 "books", aside from an introduction, a prologue and 6 appendices. Tolkien wrote, "The Two Towers gets as near as possible to finding a title to cover the widely divergent Books 3 & 4; and can be left ambiguous Plot summary[edit] Book III: The Treason of Isengard[edit] Book IV: The Journey to Mordor[edit] Frodo and Sam discover and capture Gollum, who has been stalking them in their quest to reach Mount Doom and destroy the One Ring, as Gollum attempts to reclaim the Ring for himself. Gollum leads them past the city of Minas Morgul and up a long, steep staircase of the Cirith Ungol and into the lair of an enormous spider named Shelob. Critical reception[edit] Adaptations[edit] "The World is changing. See also[edit] References[edit] Jump up ^ "The Two Towers".

The Hobbit (film series) The Hobbit is a film series consisting of three epic fantasy adventure films directed by Peter Jackson. They are based on the 1937 novel The Hobbit by J. R. R Tolkien. The first film in the series premiered at the Embassy Theatre in Wellington, New Zealand on 28 November 2012. Peter Jackson and Fran Walsh originally expressed interest in filming The Hobbit in 1995, then envisaging it as part one of a trilogy (part two would have been based on The Lord of the Rings). On 16 December 2007, New Line and MGM announced that Jackson would be executive producer of The Hobbit and its sequel. In February 2008, the Tolkien Estate (through The Tolkien Trust, a British charity) and HarperCollins Publishers filed a suit against New Line for breach of contract and fraud and demanded $220 million in compensation for The Lord of the Rings trilogy. Guillermo del Toro was originally set to direct the film, but left because of ongoing delays.

The Encyclopedia of Arda The Encyclopedia of Arda is a personal project - a tribute to and a celebration of the works of J.R.R. Tolkien. The site is evolving into an illustrated hypertext encyclopedia of Tolkien's realms and peoples. It already contains about four thousand entries, and we're constantly adding new entries and expanding existing ones. Inside the encyclopedia The Encyclopedia of Arda contains thousands of articles covering topics from J.R.R. You'll also find a selection of interactive tools, including a chronicle to help you explore Tolkien's fictional history, and calendar to translate dates and events, a lexicon of names, a glossary of old and rare words, and much more. Context and approach The content of the Encyclopedia is written in the same context as Tolkien himself used; he presented himself simply as a translator, rather than originator of the tales. About the name Arda Special thanks But the real Special Thanks, though, belong to the memory of J.R.R.