The Cinematography of "The Incredibles" - Part 1 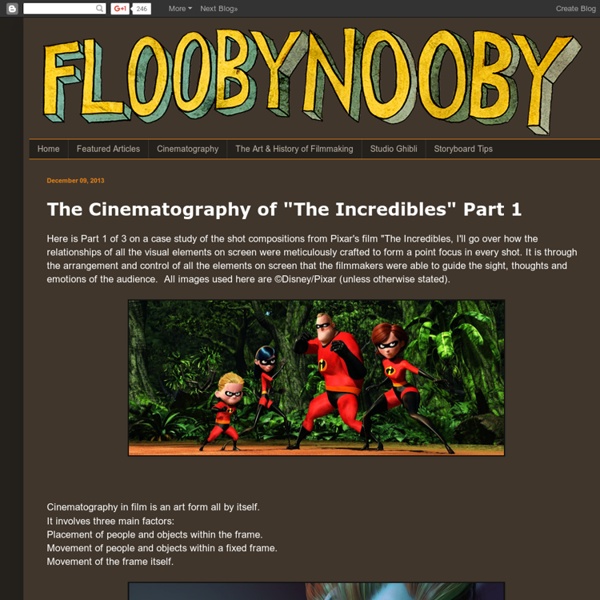 Whether its up shots or down shots, you'll often find these lines that run through the character's eyes, again unconsciously leading your eyes to where the director wants you to focus. With so many nice angles that keep making the shots look visually interesting even when they are meant to be very simple, all reminds of the show Mad Men. Almost that retro look, I suppose The Incredibles is meant to be set in the 50s and then once they flash forward to after the marriage and the trial we're in the 60s. It's strong, graphic, bold cinematic storytelling displayed in the visual grammar of this film. Like in the Mad Men, The Incredibles has sleek color combinations and contrasting shapes, well balanced imagery, textures space on the screen is well balanced with flat texture-less areas, particular areas of each shot hold certain amounts of weight and value. See all the crazy angles in the following shots. Watch the story reel (animatic) for this sequence here. Courtesy of Carlos Baena. Related:  cinematography

The Cinematography of "The Incredibles" Part 3 See Part 1 here, and Part 2 here.Continuing with my case study of the shot compositions from Pixar's film "The Incredibles". All images used here are ©Disney/Pixar (unless otherwise stated). Cinematography is the art of composing the scenes of the film so they can visually tell the story in a functional and creative way. The purpose of composition is to direct the viewer's eye to the central point or "story" in your scene. Over and over again, the Rule of Thirds, Perspective/Depth, Intersecting Lines, Negative Space, Leading Lines/Diagonal Lines, Triangular Composition, and Character Line of Action are all displayed through out the second half of the film - in ways that show visual balance, and the relationship / connection between objects and characters within the frame, while helping to emphasize the development of the characters, along with their performance and the progress of the story. Look at the sequence above; An establishing shot of the island that Bob is being transported to.

Film/Book Analysis | AnimatedSpirit In this series of Favorite Films, we’ll feature the genre that drove many of us to do what we do: Animation. There are countless films that feature the use of animation, from live action to fully-animated cartoon features, including those that have lost their grasp in our fast-growing technological society, namely Hand-Drawn (2D) animation and Stop-Motion (sometimes referred to as claymation). Despite the host of good CG films that have been made in the past couple of decades I opted for this select group of traditionally crafted films because of their extraordinary quality and their impact on me personally. You may feel differently. Pinnochio (directed by Ham Luske & Ben Sharpsteen) According to Animation critic and historian, Charles Soloman, “Pinocchio remains the most perfect animated feature Walt Disney produced.” Despite being guided by an official conscience (in the being of Jiminy Cricket) we see how quickly Pinnochio fails to uphold his end of the deal. The Fantastic Mr.

Directing Motion Tour Sneak Peek: Breaking Down a Scene from Spielberg's 'Empire of the Sun' As a director or cinematographer, knowing how and when to move the camera is an extremely important skill, and it’s something that takes a lot of practice to get better at. One way to get a better sense of how camera movement can affect a scene is to dissect what the greatest directors and directors of photography have done with their films. That’s partly what commercial director Vincent Laforet is doing with his Directing Motion Tour, which starts on May 6th. Here’s how the idea of this tour started: For a few decades now, I’ve promised myself that one day I would be lucky enough to have a big home theater, and that I would sit back and watch all of my favorite films and to break them down scene by scene… Problem is: I never found the time, and when I did watch them, I would more often than not fall right under their spell: and out went any chance of analysis. Well that’s how the Directing Motion Tour was born. More from Laforet on the workshop: And the full introduction of the tour:

The Lozt Boyz: How I Study Animation If studying in school is essential to getting good grades, couldn't you say the same for creating good animation? If you truly want to have better animation, you need to study. More importantly, do you know HOW TO STUDY? When I was a kid, getting good grades never came easy to me. No matter how much I read through all the material, I would still do poorly on my tests. It wasn't until my Mom showed me HOW TO STUDY, that things changed. "WHY CAN'T MY STUFF LOOK LIKE THAT?" Then it hit me. "just because this works for me, it doesn't necessarily mean it will work for you."...because I'm dumb. SO LETS START STUDYING!!! In order to study, we need to study something. With every shot or every test I animate, I try to learn something new and get something out of it. For this demonstration I have selected a shot from the movie THE SECRET OF NIMH. My first group of questions are pretty standard. Can you give a brief description of the shot? If not a stand alone, what is the context of the shot? !!!

Serious Film Thinking Animation Blog: 10ThingsToThinkAbout 10 Things to Think About - from the book Thinking Animation by Angie Jones and Jamie Oliff. This is one of the lectures I use at the online school ianimate.net. I created this list for my book Thinking Animation to help animators create a clear and solid message with their work. I will post the 10 Things to Think About over the course of the next 10 weeks. ~Enjoy! #9 Eyes: (This particular lecture is much longer when I teach. Basic Notes on animating Eyes: Eyes are windows into the soul and the soul is controlled by the mind.Eye darts and glances tell more than any other gestures in the body when used in the right place in the scene. Overview of Eye Movement: Never animate without a reason! ...eye shape: when the iris moves around the eye the lid cuts across it changing its shape from round to oval. ...lid shape: The lid itself changes shape as the eye line changes and the brow pushes down on it with emotional poses. ...blinks: Never blink unless there is a reason! Eye Darts: Squinting:

Every Frame a Painting This is the first of two new videos today. Watch this one first. Off the top of your head, could you sing the theme from Star Wars? How about James Bond? Or Harry Potter? This video was made byBrian Satterwhite: Ramos: Zhou: How do you film a conversation? This video was co-written with Taylor Ramos. How do you emphasize to the audience that something is important? Eight Ways to Get the Audience to Look at Someone/Something:1) Let Them Speak2) Make Them Brighter or Bring Them Closer3) Let Them Move (Especially Hands or Eyes)4) Put Them in the Center of Frame5) Turn Them Towards the Lens6) Separate Them from the Group7) Isolate Them by Moving the Camera8) Have Other People Look at Them Before Edgar Wright and Wes Anderson, before Chuck Jones and Jackie Chan, there was Buster Keaton, one of the founding fathers of visual comedy. For educational purposes only.

Flooby Nooby: Cinematography Something I try to make clear on a regular basis is that cinematography is only a part of the many pieces that make up a film. Lighting, blocking and framing aside, colour and set design are obviously a big part of what we need to pay attention to, and here you can see a very specific pallet has been chosen for this film. From scene to scene there are different splashes here and there, but overall, shadows are warm and highlights cool - often, it's the other way around. Regardless, I absolutely love how colour was handled in this film.