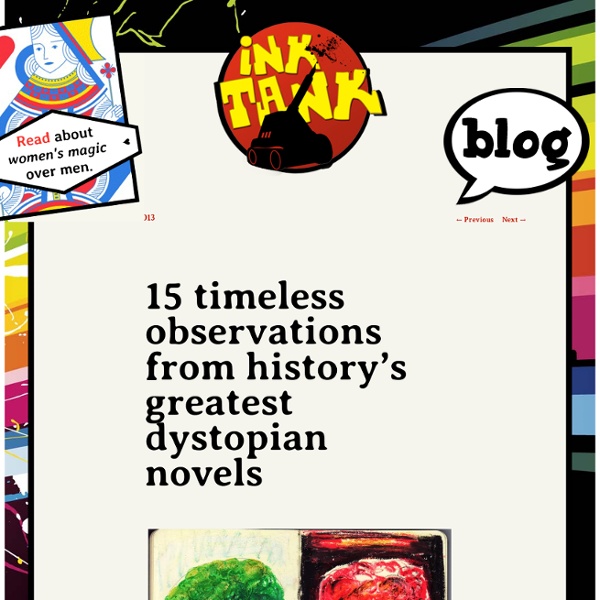 The dystopian novel has a long, dark and intriguing history. Kicking off in 1726 with Jonathan Swift’s rip-roaring satire Gulliver’s Travels, it’s gone through numerous transformations in the last three centuries. One thing all these books share, though, is that they make us think long and hard about the societies we live in. Evolving not simply as a response to fictional utopian concerns, but also as a response to the prevalent or ominous ideals and politics of the writer’s time, the dystopian novel tends to use its make-believe guise as a front to critique the ideologies under which they’ve been forged. “He who controls the past controls the future. 1984 — George Orwell “Stuff your eyes with wonder, he said, live as if you’d drop dead in ten seconds. Fahrenheit 451 — Ray Bradbury “You cannot buy the revolution. The Dispossessed — Ursula K. “It’s only because of their stupidity that they’re able to be so sure of themselves.” The Trial — Franz Kafka, The Time Machine — H.G. Related:  La vida y sus detalles

Famous ENFPs Hunter S. Thompson Journalist, author of 'Fear and Loathing in Las Vegas' Thompson: "I was never idle long enough to do much thinking, but I felt somehow that my instincts were right." Thompson: "When the going gets weird, the weird turn pro." Thompson: "I have a theory that the truth is never told during the nine-to-five hours." Thompson: "[Nixon was] a man with no soul, no inner convictions, with the integrity of a hyena and the style of a poison toad. ... Frank Kelly Rich: "There was always a powerful comfort in knowing he was out there somewhere ... guzzling high-octane whiskey and railing against a world amok with complacency and hypocrisy." Frank Kelly Rich: "Hunter didn't have to seek out adventure, he was adventure." Mark Twain Journalist and author Twain: "I must have a prodigious quantity of mind; it takes me as much as a week sometimes to make it up." Twain: "I have been told that Wagner's music is better than it sounds." Twain: "Age is an issue of mind over matter. Oscar Wilde Osho

A List of Books | 623 of the Best Books ever Written Famous Personality Types Personality and self assessment tests are always a good exercise to run through when needing a personal boost. Though not the end all be all of you and what you are good at, only you can really know that. These tests are always helpful when one is unsure of a direction to go in or how to best pursue their goals. Being into pop-culture is something that has always excited me. Being able to relate to current times and the people that are in it makes me feel grounded. Not unfortunately, when I took this test I was tied between two personality styles. Just for some moral support, I can look at the following infographic and see for myself some of the most iconic people. What is great about this infographic is that you can study these real life successful people. Bio: My name is John-Patrick and I am a graduating senior at Texas State University.

Amazon 100 books to read in a lifetime '1984' by George Orwell 'A Brief History of Time' by Stephen Hawking 'A Heartbreaking Work of Staggering Genius' by Dave Eggers 'A Long Way Gone: Memoirs of a Boy Soldier' by Ishmael Beah 'A Series of Unfortunate Events #1' by Lemony Snicket 'A Wrinkle in Time' by Madeleine L'Engle 'Alice Munro: Selected Stories' by Alice Munro 'Alice in Wonderland' by Lewis Carroll 'All the President's Men' by Bob Woodward and Carl Bernstein 'Angela's Ashes: A Memoir' by Frank McCourt 'Are You There, God? 'Bel Canto' by Ann Patchett 'Beloved' by Toni Morrison 'Born To Run - A Hidden Tribe, Superathletes, and the Greatest Race the World Has Never Seen' by Christopher McDougall 'Catch-22' by Joseph Heller 'Charlie and the Chocolate Factory' by Roald Dahl 'Charlotte's Web' by E.B. 'Cutting For Stone' by Abraham Verghese 'Diary of a Wimpy Kid' by Jeff Kinney 'Dune' by Frank Herbert 'Fahrenheit 451' by Ray Bradbury 'Fear and Loathing in Las Vegas: A Savage Journey to the Heart of the American Dream' by Hunter S.

How to Change Your Life: A User's Guide ‘You will never change your life until you change something you do daily.’ ~Mike Murdock By Leo Babauta Start with a simple statement: what do you want to be? Are you hoping to someday be a writer, a musician, a designer, a programmer, a polyglot, a carpenter, a manga artist, an entrepreneur, an expert at something? How do you get there? Do you set yourself a big goal to complete by the end of the year, or in three months? I’m going to lay down the law here, based on many many experiments I’ve done in the last 7 years: nothing will change unless you make a daily change. I’ve tried weekly action steps, things that I do every other day, big bold monthly goals, lots of other permutations. If you’re not willing to make it a daily change, you don’t really want to change your life in this way. So make a daily change. How to Turn an Aspiration Into a Daily Change Let’s name a few aspirations: How do you turn those lofty ideas into daily changes? You get the idea. How to Implement Daily Changes

30 Things to Stop Doing to Yourself When you stop chasing the wrong things you give the right things a chance to catch you. As Maria Robinson once said, “Nobody can go back and start a new beginning, but anyone can start today and make a new ending.” Nothing could be closer to the truth. Here are some ideas to get you started: Stop spending time with the wrong people. – Life is too short to spend time with people who suck the happiness out of you. Update: Read our follow-up to this post: 30 Things to Start Doing for Yourself Photo by: Rob Brucker

40 Ways to Feel More Alive “I don’t believe people are looking for the meaning of life as much as they are looking for the experience of being alive.” ~Joseph Campbell As I write this, I am two hours away from my first weekly acting class in Los Angeles. I’ve been here for almost two years now, and though I loved Community Theater as a kid, I never so much as researched acting classes until a couple weeks back. I frequently said I wanted to do it, along with painting classes, which I’m starting next week, but I always made excuses not to start either. I was too busy. The list went on and on, but I realized the last two were the big ones for me. Also, I hesitate to give large amounts of time to hobbies I have no intention of pursuing professionally. I realized last month, however, that I want to prioritize more of the things that make me feel passionate and excited—and not just occasionally, but regularly. I don’t know if these classes are “leading” anywhere. Say Something You’ve Been Meaning to Say 1. 2. 3. 4. 5. 6.

What Does Your Handwriting Say About You? What Does Your Handwriting Say About You? graphology Graphology is the study of handwriting, especially when employed as a means of analyzing a writer's character, personality, abilities, etc. How you write can indicate more than 5,000 different personality traits. In the medical field, it can be used to refer to the study of handwriting as an aid in diagnosis and tracking diseases. size large letters You are out-going, people oriented, outspoken & love attention. small letters You are shy or withdrawn, studious, concentrated and meticulous. average You are well-adjusted and adaptable spacing between words wide spacing You enjoy your freedom and don't like to be overwhelmed or crowded narrow spacing You can't stand to be alone. slanting No Slant You don't let your emotions get the best of you. Slants to the right You are open to new experiences & enjoy meeting new people. Slants to the left You tend to keep to yourself and generally like to work behind the scenes. shape of the letters Rounded letters Open