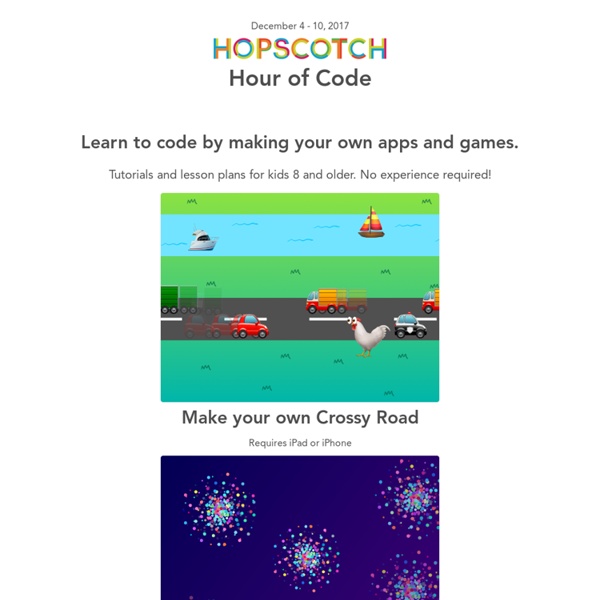 Kodable CodeCombat Welcome, Inventors! App Inventor is a free, cloud-based service that allows you to make your own mobile apps using a blocks based programming language. You access App Inventor using a web browser (Chrome, Firefox, Safari). With these beginner-friendly tutorials, you will learn the basics of programming apps for Android devices. You will need: A Mac or Windows computer (see system requirements)An internet connection You will make a mobile app, so it's fun to see it run on a phone or tablet while you build the app (and after!). Choose which way you want to connect to run your apps, and follow the links to setup instructions: Android mobile device (phone or tablet) and wi-fiAndroid mobile device (phone or tablet) and a USB cableOn-screen emulator If you hit any snags, we're here to help! Teachers: Get support and tips for preparing for App Inventor hour of code with your students. We have four tutorials to try out for the Hour of Code. For each tutorial, we have multiple ways of accessing them: What's Next?

Teachers talk about TKP The TEACHERS resource section of the TKP site is organized as follows: General Topics for teachers on this site include the following: what we teach (i.e. which languages, software, IDEs, etc..),where we teach (i.e. links to events),who teaches (list of trained TKP teachers by location)how to teach the using the Intention Method (i.e. list of general teaching tips for all of our courseware) In addition we are adding teaching resources for each recipe (or lesson unit) to this site. text description of concepts taught by section of recipe (i.e. for recipe, for variation, for recap, for quiz, etc…)tips to teach each sectionshort video for teachers on teaching tips for that sectionXtras for that recipe – these can include warm-up (mini) recipes and more We welcome any and all feedback about the usability and usefullness of our courseware and teacher training materials. Here are some more CS resources for teachers from Google – CS resources – here from Microsoft - US Teacher resources – here

the Hour of Code is coming On Monday, October 14, 2013, Code.org announced the “Hour of Code," a campaign to introduce 10 million students to one hour of Computer Science. Live stream of the announcement Microsoft, Google, Apple, Amazon, Bill Gates, Mark Zuckerberg, Jack Dorsey Among Those Joining Campaign SAN FRANCISCO and SEATTLE – October 14, 2013 – Code.org, the non-profit dedicated to promoting computer science education, today announced a nationwide campaign calling on every K-12 student in America to join an "Hour of Code." The initiative asks schools, teachers and parents across the country to help introduce more than 10 million students of all ages to computer programming during Computer Science Education Week, December 9-15, 2013. The organization also announced the support of multiple organizations and individuals, including Google, Microsoft, Amazon, Apple, Bill Gates, Mark Zuckerberg, Reid Hoffman and Jack Dorsey. Hour of Code - A tutorial featuring technology leaders New donors and partners Get involved

Simon Haughton's website: LOGO Programming I'm going to admit that the fourth lesson I do on LOGO is complicated - the understanding of the programming commands that is required is of a high level and any mistake made (even the tiniest one) will result in either commands not being executed properly or error messages popping up on screen. It is, however, a lesson which the children rose to the challenge of today and which they were extremely impressed with when they saw what on-screen patterns they had managed to produce by its end. The age-old saying "you only get out what you put in" was certainly true today! Last time, I showed the children how to use the REPEAT command to draw regular polygons and stars so the natural progression was therefore to teach them how to create procedures this time. I began by asking them to follow my demonstration on how to create a procedure which draws a triangle when it is called. The next procedure I asked the children to create was one which drew a square shape.

MonoGame - Write Once, Play Everywhere - Home Teach Kids Programming with These 7 iOS Apps Learning how to code is now more important than ever before. Technology is going to play a big role in our lives in upcoming decades. It is a very good idea to teach young kids foundations of good coding for the future. These 7 iPhone and iPad apps make it easier to teach young children some coding without boring them: Hopscotch: teaches kids to code with simple building blocks. Cato’s Hike: a fun game that teaches your child the basics of programming (e.g. loops, branches, go to, …). Light-bot Hour of Code: a universal application that introduces kids to programing. Move The Turtle: a universal game that teaches your kids how to create programs with intuitive commands. Kodable: a free application that teaches your child how to solve problems in sequential steps. iLogo: a cool application for teaching programming. Daisy the Dinosaur: teaches your child the basics of programming in a fun fashion. Have you found better iOS apps to teach kids programming?

Coding for technophobes: how to teach the new computing curriculum | Teacher Network The ICT curriculum is changing. For a start, it has a new name: computing. The hope is that the new curriculum will equip children with the skills they need to become active participants of this fast-paced digital world. Some teachers are understandably apprehensive about teaching skills such as computer programming, which will become increasingly important for pupils. So, here is my advice on how to get a group of eight-year-olds to unleash their inner Steve Wozniak or Bill Gates. Step 1: HistoryFirst, I give some historical context to help the children understand the origins of computer programming and its purpose. Step 2: Share expertiseI find it is best to break the class into small groups of two or three, getting them to share a PC when they are using programming software. We often download programming tools, such as Scratch, to create games. If you want to teach game creation, you don't have to look far for inspiration. This content is brought to you by Guardian Professional.

Kodable Teaches Kids To Code Before They Learn To Read Preschool and kindergarten are recommended times for kids to learn a new language, while they’re still in the process of learning their first one. So Grechen Huebner and her cofounder, Jon Mattingly, created an app that teaches kids to program - before they’ve even learned how to read. The idea behind the iPad app, Kodable, is just that simple: create an app to make programming a child’s second language as early as possible in the child’s life. Kodable is designed for children between the ages of five and seven, but Huebner said it’s been tested and enjoyed by kids as young as three. “One of my favorite moments was when this three-year-old boy was playing it and literally screaming, he was so excited,” she said. “I had gone to a baby shower where the mother got this software called ‘Your Baby Can Read,’ so it started as a joke - oh, what if we created, ‘Your Baby Can Code’? Kodable has no written instructions.

Can These iPad Apps Teach Your Kid to Code? - Lauren Goode - Product Reviews The pillars of elementary education in the U.S. — reading, writing, math — have remained the same for a long time. Now another skill set is increasingly coming into focus: Computer programming. This week, I tested two new mobile apps, Kodable and Hopscotch, that are aimed at teaching young children the basic skills necessary for computer programming. Both are for iOS — specifically, for iPad — although Kodable plans to introduce an Android version of the app. And both are free to download, but Kodable does include advanced levels that cost $1.99 to access. What is programming, exactly? Coding tools for kids and beginners are hardly a new thing, but many earlier applications are browser-based, while these apps capitalize on the gravitational pull that tablets seem to have on kids. Kodable, which launched late last year, is aimed at kids in kindergarten through second grade. I found it easy to get the hang of Kodable, which is based on Basic, an early and simple programming language.