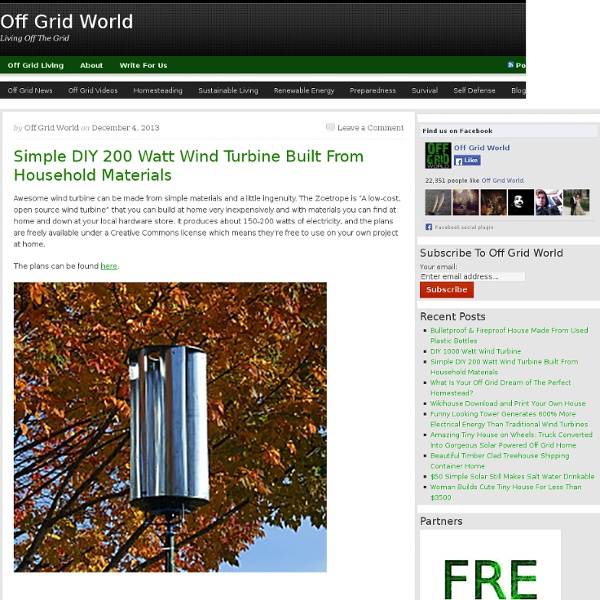 Awesome wind turbine can be made from simple materials and a little ingenuity. The Zoetrope is “A low-cost, open source wind turbine” that you can build at home very inexpensively and with materials you can find at home and down at your local hardware store. It produces about 150-200 watts of electricity, and the plans are freely available under a Creative Commons license which means they’re free to use on your own project at home. The plans can be found here. The Zoetrope is a vertical-axis wind turbine made from common materials such as stove pipe, metal brackets, plastic sheet and a trailer hub. The Zoetrope Wind Turbine Comments comments Related:  Wind Power • Wind

Tower Generates 600% More Electricity Than Traditional Wind Turbines The Sheerwind wind turbine promises to produce 6 times the electrical power than traditional wind turbines. This funny looking wind tower acts like a funnel, directing the wind from any angle, down through a tube to a ground based turbine generator. The funneling of the wind through a narrow passage effectively creates a “jet effect” increasing the velocity of the wind, while lowering the pressure. This is called the Venturi Effect. This speeds up the wind turbine mounted inside the narrowest portion and generates electricity. As such it can capture and generate electricity at a much lower wind speed than current wind power technologies. The idea is so simple, so elegant, and promises to produce so much more energy at lower cost and more efficiently, that it might just be the answer to many problems with current wind turbine technology. Imagine a smaller HOME version on your off grid cabin. Conventional wind turbines use massive turbine generator systems mounted on top of a tower.

Make Fuel at Home With Portable DIY Refinery | Autopia People were making ethanol at home long before there were cars. They called it moonshine. With gas prices going through the roof and everyone worried about global warming, a California company is betting people will jump at the chance to use the same technology to turn sugar into fuel for less than a buck a gallon. E-Fuel Corporation has unveiled its EFuel 100 MicroFueler, a device about the size of a stacking washer-dryer that uses sugar, yeast and water to make 100 percent ethanol at the push of a button. "You just open it like a washing machine and dump in your sugar, close the door and push one button," company founder Tom Quinn told us. "A few days later, you’ve got ethanol." Is it really that easy? According to Quinn, it is. "It’s so simple, anyone can make their own fuel," Quinn says. "Just as the PC brought desktop computing to the home, E-Fuel will bring the filling station to the home," he says. Maybe. “There’s a lot of hurdles you have to overcome.

10 Amazing Homemade Soap Recipes Would you like to learn how to make your own soap? There are so many different methods of soap making and there are so many different soap recipes you can make that it’s sometimes hard to know where to start. Homemade soap can be a luxurious treat for yourself, or a special, thoughtful gift for friends and family. You can make up big batches and have a huge selection of homemade gifts ready to give to friends and family for the holidays. In this blog post, I want to share ten amazing recipes for making your own soaps at home. Simply click the links to see step-by-step photos and tutorials for each soap. How To Make Pure Coconut Oil Soap – This wonderful coconut oil soap requires just three ingredients, it has an amazing lather and can even be adapted to make laundry detergent! How To Make Herby Citrus Soap – This is a beautiful soap packed full of rosemary and lemon zest for a herby citrusy scent. How To Make Shampoo Bar Soap – This soap is a little different. Click Here To Download It Now

DIY Cheap Windbelt Generator Using VHS Tape picture 10 picture 11 The Key Advantages of Windbelt over existing micro-wind turbine technology is not only the cost but simplicity and also the fact that it is good at taking power from turbulent wind flows, i.e. in a built up domestic setting, and it is also very quiet in operation. Unlike PV solar panels, wind turbine generators do not scale down so well. While large wind turbines can generate huge quantities of electricity very efficiently and relatively cheaply, as the size of the wind turbine is reduced, efficiency reduces and cost per generated watt jumps quite enormously. Wind-belt is an ultra efficient and mechanically very simple wind generator alternative. Larger DIY versions of the wind-belt are possible, but in such case the problem of noise emerges.

What do I need to know about buying land for Living off the Grid? | offgridjourney Shirley Shay Lemoine Hi! I have a question and didn’t know if to post or just ask you directly and you could maybe post for me if you allow that? It’s okay if not. I would just really appreciate the feedback of other more experienced homesteaders. My husband and I are fairly new to the concept of off-grid living and homesteading. Good soil for gardening Mild winters (some snow is okay) Not too close to the New Madrid fault Not a lot of tornado activity (I can deal with hurricanes but tornadoes petrify me!) Any other feedback or advice as to other things to consider would be greatly appreciated! Thanks in advance and God bless! Dear Shirley, I would say you are really on the right path. You can use the terrain to determine your building materials. If you planned to build with shipping containers, the further you are from a port, the more they cost. If you buy the land on payments, can you manage the payments? Do you smoke? Can you build? Who needs a teacher when you’ve got Youtube?

Discover 11 Amazing Uses For Hydrogen Peroxide Hydrogen peroxide is lurking in many of our first aid kits… and that’s a shame. We all apply it on cuts and scrapes as an antiseptic, but actually it does more harm than good! Before I did some research on this topic I, like many others, thought that the foaming action signifies the killing of bacteria. The foaming comes from an enzyme called catalase found in blood and cells. When it comes in contact with hydrogen peroxide it turns it into water and oxygen. So the bubbles you see is actually pure oxygen created by catalase and not a bacteria killing process. Mayo Clinic Researchers agree that hydrogen peroxides can damage the delicate tissue and even impede the wound healing process. As you can see, no use for hydrogen peroxide in your first aid kit. 1. Hydrogen peroxide can act like bleach, which makes it a perfect alternative to keep your clothes white. 2. 3. Just add the 3% hydrogen peroxide into a spray bottle. 4. Very effective against mold and mildew. 5. 6. 7. 8. 9. 10. 11.

This new wind turbine could generate half your home energy - Page 2 of 2 - Homestead Notes The design of this wind generator makes sense because it captures the wind over a longer period of time. The efficiency of it is far better than those wind turbines already in existence. This fascinating story about the company, The Archimedes comes from TreeHugger where you can read more in detail. A Dutch renewable energy start-up called The Archimedes is working to solve both of those problems in a new class of small-scale wind turbine — one that is almost silent and is far more efficient at converting wind into energy. When used in combination with rooftop solar panels, a house could run off grid. The Liam’s blades are shaped like a Nautilus shell. Video: new wind turbine could generate half your home energy… Image © The Archimedes

DIY Cheap Wind Generator Using Old Floppy Drive WARNING! Before connecting any USB device it is MANDATORY to check polarity and exact voltage (it has to be between 4.9 and 5.3 Volts) on USB connector using multimeter!!! Now we need to make the remaining mechanical parts for the wind generator. We need to prepare a bracket and a turbine (propeller). Bracket can be made out of aluminum tube with 3-4mm diameter. Do not forget to fix it firmly. Generator (stepper motor) can be easily fastened directly to the bracket using clamps or using a metal “L” profile. If you pick horizontal axis wind turbine, you can create a three-bladed propeller using the meter, pen and scissors for cutting sheet metal.

Hydroelectric Hydroelectric Power - Water power - micro hydro systems Micro hydro power is probably the least common of the three readily used renewable energy sources, but it has the potential to produce the most power, more reliably than solar or wind power if you have the right site. This means having access to a river or creek that has a high enough flow to produce useable power for a good part of the year. Many creeks and rivers are permanent, ie, they never dry up, and these are the most suitable for micro-hydro power production. The Campo Nuevo Watermotor is the only modern turbine designed to drive common machines directly with waterpower. Micro-Hydro Power Plant overview & basic math formulas & conversion needed to find "Head", "PSI", Flow Losses" & Power Output. By Joe Cole Micro Hydro Systems work? Info: The Micro Hydro Centre has been carrying out research into low-cost equipment for small-scale hydro-electric power (up to 100kW) since 1985. Dealers:

For the cost of an iPhone, you can now buy a wind turbine that can power an entire house for lifetime Soon after assuming office, Kerala (southern state of India) Chief Minister Pinarayi Vijayan kicked up a storm by publicly supporting the Athirappilly hydro electric project, which environmentalists said, if implemented, would create ecologic imbalance in the area and destroy the Athirappilly waterfalls, the largest natural waterfalls in the state. It is not that the government is oblivious to the impact that the project could make, but it says it has no option but to leverage existing means to check the growing power crisis in Kerala, which partially depends on the private sector for electricity. Things are no different in other states either. While Kerala has attained almost 100 per cent electrical coverage, many parts of India still remain in the dark. For a large portion of the Indian population, electricity to this day remains a distant dream. Enter two siblings who want to make India’s energy crisis a thing of the past. For the startup, opportunity is massive.