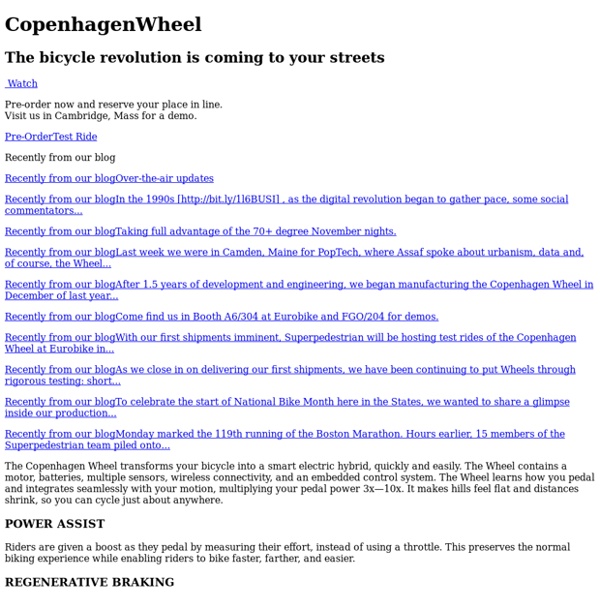 Superpedestrian, Inc is a venture-backed company operating out of Cambridge, Massachusetts. Our diverse team is developing lightweight electric vehicles with integrated online platforms, finding new ways to connect people with their environment. Founded in late 2012 by Assaf Biderman, Associate Director at MIT's SENSEable City Lab, Superpedestrian seeks to provide new forms of human-powered mobility for cities. Ultimately, our vision is to offer an improved quality of living to everybody. The Copenhagen Wheel was initially developed at MIT's SENSEable City Lab as a research project, sponsored by the Mayor of Copenhagen. It has won multiple design awards and been reviewed in over 1,000 media publications, including BBC, Wired and the New York Times - not to mention a glamourous acting debut during a whole season of TV series Weeds.

Researchers Find New Genetic Clues to Longevity If you live to be 100, you’re in a special group, one that longevity scientists are eagerly studying for clues to battling aging. But are these centenarians long-lived because they don’t get the diseases that fell the rest of us—heart problems, diabetes, dementia, arthritis and more—or because they are protected somehow against the effects of aging? Based on the data so far, most experts have concluded that centenarians get to where they are because they have some anti-aging secret that shields them against the effects of aging. That’s because studies found that centenarians had just as many genes that contribute to disease as those with more average life spans. MORE: The Cure for Aging

5 Things You Should Know About Stretching And Mobility By Joe Vennare for Life by DailyBurn To stretch or not to stretch, that is the question. At least it has been lately with the science of stretching being called into question. Marketplace - ThingWorx Introducing the ThingWorx Marketplace™ Since its release in 2011, ThingWorx platform has offered companies a 10X reduction in the time it takes to build and deploy IoT/M2M applications. With the introduction of the ThingWorx Marketplace, ThingWorx users can expect another step change in further reducing the time, risk and effort it takes to build and deploy IoT/M2M applications. Now developers can assemble the bulk of their applications from an ever-growing, global catalog of prebuilt, tested and reviewed components. The ThingWorx Marketplace is a first mover in an exciting new niche with vast potential.

Honey, I love you…but we need separate beds My husband, Josh, and I shared a bathroom before we ever shared a bed. Our individual bedrooms were separated by a full bath with a door on either side, like the Brady Bunch kids’. I always made sure to lock his side or risk his busting in on me. Which, when it did occasionally happen, was always super embarrassing — especially because we weren’t a couple; we were roommates. A month or so after I moved in, though, the lines blurred, and we became kind of a couple. If sneaking around while your third roommate was asleep downstairs can be considered coupledom, that is.

FlyKly aims to turn almost any bike into an electric motor-powered ride FlyKly's Smart Wheel makes pedaling a bicycle easier Image Gallery (7 images) Electric bicycle wheels are coming to the masses, and they are coming from multiple sources. How can an athlete enhance performance legally? 22 November 2013Last updated at 19:55 ET By Gabriela Torres BBC Mundo health reporter Cryotherapy chambers are increasing in popularity What is the different between a gold and a silver medal? The enhancement of the performance by just 0.5% is what could keep an elite athlete away from glory.

Asterisk.org Extending The Power Of Asterisk Most Asterisk-based systems and solutions require additional components: phones, gateway appliances or interface cards and other hardware. Companies that deploy open source solutions frequently need training and often prefer to have support from a trusted partner. Digium meets all of these needs with a family of product and service offerings built exclusively for the Asterisk market.

What Your Girlfriend Wants, But Will Never Ask For She wants you to touch her mindlessly while the two of you watch a movie – she doesn’t want that ‘Netflix and Chill’ touching, where the movie is clearly just a pretext to do something else. She wants you to drag your fingers lightly along her arm, in her hair, on her hand. She wants to know that you want to touch her as a matter of habit, as a reflex that just feels more right than doing nothing at all. Touching should become second nature, not always a means to an end. She wants you to surprise her, but not with some grand gesture you saw in a movie.

FFv1.1 Ground Firmware Testing / FFv1.2s Melonscooter, so named for the "melon-sized" Turnigy C8080-170 brushless motor that drives it, has been through a lot of motor controllers. The C8080-170 no longer exists, but the longer variant, the C80100-130 is now available through Leaders Hobby (what you get if you send "HobbyKing" forward and backward through Google translate a few times) under the EMP brand name. I used to think this was the hardest motor to drive, within the set of small EV traction motors. Used to. Then I met this insane thing: After attempting to drive this two-turn monster e-bike motor with only marginal success, the C8080-170 looks rather tame. Especially since Melonscooter has fixed gearing and no freewheel, so it's entirely possible to kick start it.

How much better is standing up than sitting? 16 October 2013Last updated at 03:26 ET Studies have claimed major health benefits for standing for much of the day as opposed to sitting. The difference is marked, explains Michael Mosley. Guess how many hours a day you spend sitting? Fewer than eight? BindingConfig - openhab-samples - Samples for binding configurations - This project hosts samples and tips&tricks on how to use openHAB This page contains samples for binding configurations. These samples are sorted by binding. How to send Date and Time from NTP to KNX This example sends the current date and time from the NTP to the KNX binding Items: