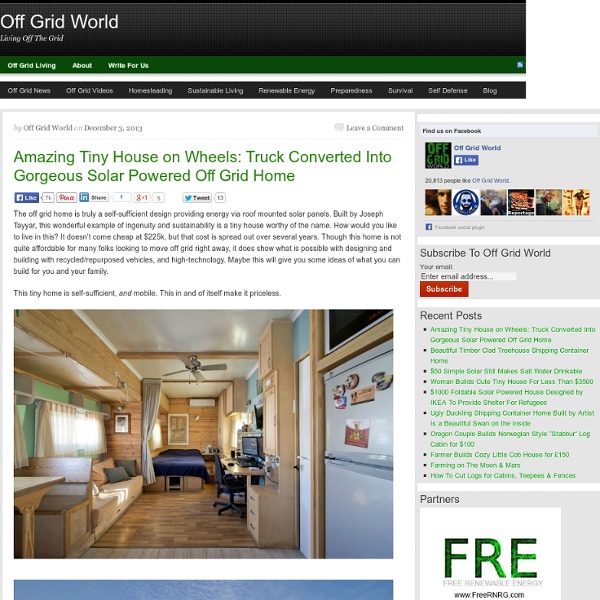 The off grid home is truly a self-sufficient design providing energy via roof mounted solar panels. Built by Joseph Tayyar, this wonderful example of ingenuity and sustainability is a tiny house worthy of the name. How would you like to live in this? It doesn’t come cheap at $225k, but that cost is spread out over several years. Though this home is not quite affordable for many folks looking to move off grid right away, it does show what is possible with designing and building with recycled/repurposed vehicles, and high-technology. This tiny home is self-sufficient, and mobile. via: via: Images: Comments comments Related:  ideas

Sol Haus Design's 140 Sq. Ft. Tiny House: Would you live here? This 140 square foot tiny house on wheels sits on a 20′ x 8′ utility trailer. It’s designed to be self-sufficient and is the home of Vina Lustado at Sol Haus Design. She will be using portable solar panels and passive solar heating/cooling approach to go off the grid. The walls, ceilings and floors are highly insulated to help with this and additional heating is provided by a propane gas fireplace. Like most tiny homes this one has an upstairs sleeping loft with a big skylight so you can see the moon and stars before bed time. Unlike most skylights in tiny houses, this one can actually open to let in the breeze. Image: Sol Haus Design on Facebook I encourage you to learn more about this tiny home and enjoy the rest of the tour (in photo and video) below: Image: Sol Haus Design on Facebook So how tiny is 140 sq. ft.? For those of you, like me, who have in the past wondered whether you should go tiny or small. “Tiny vs Small” (400 sf and 140 sf side by side) Image: Sol Haus Design on Facebook

Historic Shepherds Huts - on the move A quick note to say that the excellent site dedicated to shepherds' huts - Historic Shepherds Hut ("a web based archive dedicated to record survivors and the forgotten part they once played in our country's rich agricultural past") - is heading to a new location at www.shepherdhuts.co.uk because of hosting problems. They're still in the process of moving everything across but it's worth changing your bookmarks now as they are also planning to expand the site to deal with lots of new huts which have come their way as a result of recent media coverage. Incidentally, if you have a shepherd's hut for sale, please do contact Shedworking - there were many, many disappointed readers who were very interested in the last one we advertised (including the editor of a wellknown national magazine) that I'm sure you'd find a buyer quickly. Our Monday posts are sponsored by garden2office, the Swedish garden officespecialists.Click here for more details.

The Cricket Trailer As the dog days of summer wrap around us, it’s hard to even think that sooner than later it’s going to start getting cooler out. Cooler temperatures, especially at night, make for ideal camping weather. If you’re looking to get out of the state and peer into some uncharted territory without leaving all the comforts of home, we’ve found the perfect getup for ya’. The Cricket Trailer, invented by Texan Garrett Finney, is perfect for two people with no schedule. With a fascination with small environments, Garrett put his thoughts together to great the ultimate small living space. Fast forward to 1999, the boy, now an architect and designer works at NASA on the International Space Station. Enter stage left, the Cricket trailer. The result is the Cricket.

Spacious Cabin on Wheels with Large Windows Side View I love how it has so many windows and the large sliding glass doors. Side View with Plenty of Covered Porch Space If it were up to me I would have put the sliding glass doors to give you direct access to the covered porch. Kitchen with Lots of Cabinets Bathroom with Full Shower Floor Plan This model is called the Puget Sound. There are a bunch of optional features, too, which I’ll list for you in bullet format below: 6′ or 10′ covered front porchDouble doors accessing front porchAdditional length up to 33′32″ showerPine tongue & groove interiorDrywall interior For even more info, specs and pics on this Park Model style tiny house on wheels go here to Rich’s Portable Cabins.

Cai (tm) House Nick Hurt of Cambridge, VT has created a cabin he calls the Cai ™ House. This is a portable cabin. Nick is in the process of getting his business off the ground and wanted to share his design here on the Tiny House Blog. The cabin pictured here is a prototype cabin and is not for sale. Nick describes his prototype cabin below: Definition- a two story 420 square foot portable, energy efficient, low impact, self sufficient structure that can be set up by one person in 6-8 hours. Where transformer toy meets housing- Everything stores neatly inside during transport and unfolds into a cute little house that can be folded up to be transported again. The prototype shown in the photos is not insulated and was constructed for personal use. I would like to custom build you a custom cai ™ house utilizing highest quality sustainable materials assembled by Vermont’s finest Master Carpenters. Intended uses- 1. General Information- 1. Cai (tm) House Folded Living Area Loft Floor Plan Loft Floor Plan

Tiny House From Reclaimed Wood | Reclaimed Wood Blog by Greg Cater September 27, 2013 Recently I went on a field trip with my friend Kent Griswold from Tiny House blog. We headed west to a little town on the California coast called Point Reyes Station, which is located about an hour north of San Francisco and is situated on the northeast side of Point Reyes National Seashore. We were invited by a homeowner named Colin to pay a visit to his tiny house, which measures 8 feet wide and 18 feet long or 144 sq ft. Colin’s home scores big for his use of reclaimed wood and other salvaged materials including windows and doors. The only wood product that was purchased new for the home was the sheeting plywood, as it can be a challenge to find structurally sound reclaimed plywood. Moving from build sit to current location I asked Colin about where he found reclaimed wood for the project. T & G fir flooring The vertical is on top and horizontal on the bottom, which adds interest and gives the house a great look. Kent & Colin talking about the Tiny house