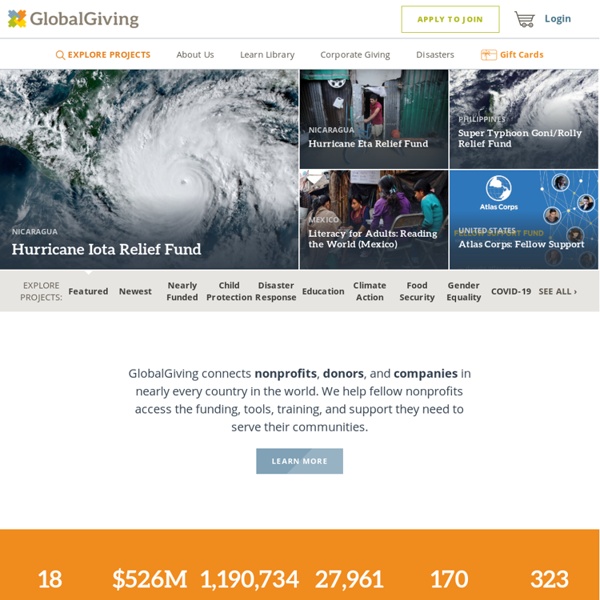 Top 9 Online Fundraising Blogs for Nonprofits Fundraising online for a nonprofit initiative or cause has a lot of moving parts. Thankfully, there are some awesome experts out there who are willing to share what works and what doesn’t. I’ve compiled a list of some of the top blogs out there on online fundraising.

The DO’s and DON’Ts of Social Media Updates You’ve set up your social accounts and you seem to be gathering your fans online fast, but thinking about what to post online can sometimes seem as tricky as coming up with a wedding toast. We all want to be “Liked”, so what’s the secret to an irresistible to retweet update? Here are 8 Do and Don’ts for making the most out of your social media presence: DO Be informative. Social Media Management Oracle Social Relationship Management delivers the first, unified solution for social monitoring, marketing, applications, engagement and analysis, and it fully integrates products from Vitrue including Publisher, Tabs, Shops, Games, Open Graph Object and Analytics.

Edmonton High School Creates Perennial Food Forest « GFSA News Posted by gfsa in Countdown to P2S, The How To's. trackback Since February, I have been fortunate enough to work with students at Jasper Place High School to create a perennial food forest system in the school’s largest courtyard. Containing more than seventy different edible perennial herb species, the garden is not dependant on outside human care; of particular importance for summer holidays. The Chronicle of Philanthropy - The news and tools you need to change the world By Holly Hall, Eden Stiffman, Ron Coddington, and Meredith Myers Charitable giving rose 5.4 percent last year to a record $358.4 billion, according to estimates released today by "Giving USA," the annual snapshot of American philanthropy. The figures show that donations from individuals, corporations, and foundations last year topped the record giving figure achieved in 2007, just before the recession started to affect donation figures.

The Executive's Guide To Enterprise Social Media Strategy: Review Statistically speaking, most of you probably work for someone else. At some point, if you are the social media evangelist for your team, unit or company, you will have been asked this question: so, what’s this all about? Do we need to have a Twankerbook account? Answering the “should we” question is probably easy for active users of social platforms (if not, see below.) If your entreaties are successful, you’ll be rewarded with this question: “OK, I’m in. Listen to Music for Free on Playlistnow.fm Over recent months we have seen how 2015 has become a year that seems to get theaters implode with the arrival of very important blockbusters. But that is one year, and 2014 thinks not remain simply as ” the threshold of 2015.” To demonstrate this, we present fifty titles that come over the next twelve months our rooms, films for everyone . In 2014 we will have a good portion of sequels , the occasional remake, but will also be a fantastic year for fans of filmmakers like David Fincher , Wes Anderson, Christopher Nolan Clint Eastwood or all new jobs. It is also the year we say goodbye to Middle-earth , the year in which the Bible regain its place in the rooms , and the year that Marvel will bring new characters, and his first animated film with Disney. Many important for film buffs in the next 365 days now.

Dustin Bajer's Page - Edmonton Permaculture Since February, I've been working with students and staff at JasperPlace High School to create a self maintaing food forest in theschool's largest courtyard. Made up of over 70 different perennialedible plant species (started from seed in the school greenhouse) andmodelled after a forest ecosystem, the courtyard garden is capable ofbuilding soil, increasing biodiversity, producing an abundance of foodfor the culinary program, and providing a cross-curricular leaningspace. Though we've had a lot of success in such a short time, there is stillplenty of work to be done. Most crucially, programs such as JPPermaculture need your help letting educators, policy makers, and thegeneral public know about the amazing potential of permaculture andschool gardening projects. The more people we can get on board, themore successful the program will be! If you have Facebook, please visit the link blow and click 'like' atthe top of the page.

How to Leverage Welcome Emails to Retain New Donors Posted December 17, 2015 by Elizabeth Chung You’ve worked hard to get a prospect to finally donate, but now comes the real challenge: getting them to stay. While organizations focus intently on the acquisition process, they still struggle to retain donors after the fact. Only 27 percent of first time donors stay with an organization. 15 Creative Ways to Thank Donors - Best practices, tips & fundraising ideas for nonprofits Posted December 15, 2015 by Chelsea Alves The most important thing you’ll ever do to steward your donors is say thank you. Just about every nonprofit leader or fundraiser knows the importance of thanking donors—not just as an expression of gratitude and good manners, but as a way of building relationships.

4 More Clever Ways to Improve Your Thank You Letters As we mentioned last week, first-time donor retention is a measly 19%. You can do so much better with just a few small changes. Start with the first thing your donors get after giving – the thank you!