What Instruments Are Played in Klezmer Music? 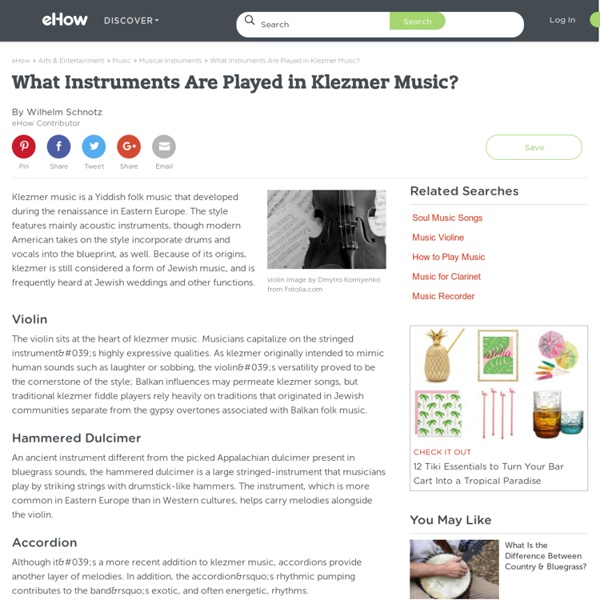 Klezmer music is a Yiddish folk music that developed during the renaissance in Eastern Europe. The style features mainly acoustic instruments, though modern American takes on the style incorporate drums and vocals into the blueprint, as well. Because of its origins, klezmer is still considered a form of Jewish music, and is frequently heard at Jewish weddings and other functions. Violin The violin sits at the heart of klezmer music. Hammered Dulcimer An ancient instrument different from the picked Appalachian dulcimer present in bluegrass sounds, the hammered dulcimer is a large stringed-instrument that musicians play by striking strings with drumstick-like hammers. Accordion Although it&#039;s a more recent addition to klezmer music, accordions provide another layer of melodies. Clarinet American klezmer revivalists embraced the clarinet&#039;s steadfast sound and octave range as the genre found a home in America. Drums Drums are a modern and recent addition to the klezmer band. Brass Related:  Research2 • research 2

What is celtic music? The term 'celtic music' is a rather loose one; for the purpose of Ceolas, it covers the traditional music of the celtic countries - Ireland, Scotland, Wales, Brittany (in France), Galicia (in Spain) and areas which have come under their influence, such as the US and the maritime provinces of Canada, as well as some newer music based on the tradition from these countries. The term is sometimes controversial. For starters, the Celts as an identifiable race are long gone, there are strong differences between traditional music in the different countries, and many of the similarities are due to more recent influences. There is also the notion that 'celtic' implies celtic mysticism and a particular influence in new-age music which has little to do with traditional music. In general, the strongest connections are between Irish and Scottish tradition and it is on these that Ceolas concentrates. The Celtic Music Regions More information from the Irish Traditional Music Archive

MusikNada Downloads Free Indonesia MP3 Song Lagu Video Music TV ups…only play and listen…always happy with our new mp3 collection Firstly multimedia placement, listen the MP3 Indonesia from Nadamusik.com. Indonesia is culturally diverse, and every one of the 18,000 islands has its own cultural and artistic history and character. This results hundreds of different forms of music, which often accompanies dance and theater. The musics of Java, Sumatra, Bali, Flores and other islands have been documented and recorded, and research by Indonesian and international scholars is ongoing. Nowadays most of the music are converted to become file MP3, down here some basic about it. MPEG-1 Audio Layer 3, more commonly referred to as MP3, is an audio encoding format. It uses a lossy compression algorithm that is designed to greatly reduce the amount of data required to represent the audio recording, yet still sound like a faithful reproduction of the original uncompressed audio to most listeners. MP3 is an audio-specific format. Our MP3 playlist are devided: 1. 3. 4.

Biography - Giora Feidman Even the greatest career starts out on a small scale. In the case of Giora Feidman, this was more than 70 years ago. It all began in Buenos Aires. Giora Feidman was born in Argentina on 25 March 1936 as the son of a Jewish immigrant from Bessarabia (Moldavia / southern Ukraine). Music was in his blood: His father was a musician, as was his grandfather. "From the very beginning, from the day of my birth, songs have always accompanied me. The young Feidman grew up in the capital city of Buenos Aires, learned to play the clarinet, began already as a child to make music with his father at various festivals and parties and at 18 was eventually given the position of clarinetist at the Teatro Colon, the most renowned opera house in all of South America. Just like hundreds of thousands of other Jews, he was also magically drawn to the newly-established state of Israel. He would remain a faithful member of the orchestra for the next 18 years. "Now I found myself in Israel.

Celtic Music Instruments From the thump of the Bodhrán to the airy rasp of the wooden flute, celtic music is known by its instruments. Here's an introduction to the main players, with links to more information, for players and afficionados. Fiddle The fiddle is the mainstay of most Scottish and Irish music. The instrument is exactly the same as a violin; fiddle is simply the term used in traditional music. Despite it's popularity, there's not much information on the net about fiddles or fiddling. Flute Flutes of one sort or another have been played in the celtic countries for over a thousand years. Tin Whistle (pennywhistle) The simplest and cheapest of traditional instruments, yet not so simple to master. More information: Ceolas Tin Whistle guide. Bagpipes & uilleann pipes Several forms of bagpipe are used in celtic music. The Scottish highland pipes are the loudest, played standing, usually in pipe bands. Bagpipe FAQ Bagpipe Web David Daye's Bagpipe site, for Scottish and uilleann pipes. Bombarde Banjo Harp Voice

History of the Mariachi Mariachi and Dance It is important to remember the son-and other types of Mariachi music- is not just music to be played and sung. From the very start it was music to be danced. The traditional dance technique associated with both the son jalisciense and son jarocho is the zapateado, a distinctive type of footwork that originated in Spain. Each of the regional variations of the son has its traditional style of dance. The lyrics of the sones frequently describe country life: in particular, the plants, animals and people of the region. Another kind of music related to the son and intimately connected with a particular dance is the jarabe. By the 1930's Mariachi musicians had begun wearing the same traje de charro, consisting of a waist-length jacket and tightly fitted wool pants which open slightly at the ankle to fit over a short riding boot. Coming of Age: Mariachi Vargas The Mariachi at Special Occasions Mariachis often help celebrate the great moments in the lives of the Mexican people.

klezmer music Klezmer music, genre of music derived from and built upon eastern European music in the Jewish tradition. The common usage of the term developed about 1980; historically, a klezmer (plural: klezmorim or klezmers) was a male professional instrumental musician, usually Jewish, who played in a band hired for special occasions in eastern European communities. In the 21st century, klezmer music can be heard wherever Jews have settled. The Yiddish word klezmer derives from two Hebrew roots: klei (“vessel” or “instrument”) and zemer (“song”). Information about the klezmorim became much more reliable in the later 19th century as biographies, legends, and fictional accounts multiplied. The klezmer calling was hereditary and male; generally, a boy studied with his father, although some boys apprenticed themselves to musicians in other towns. Get unlimited access to all of Britannica’s trusted content.

Youssou N'Dour | Biography & History Some of the most exciting sounds to come out of Africa in the late '80s and 1990s were produced by Senegal-born vocalist Youssou N'Dour. Although rooted in the traditional music of his homeland, N'Dour consistently sought new means of expression. In addition to recording as a soloist, N'Dour collaborated with a lengthy list of influential artists including Paul Simon, Peter Gabriel, Neneh Cherry, and Branford Marsalis. A native of the impoverished Media section of Dakar, N'Dour inherited his musical skills from his mother, a griot (oral historian) who taught him to sing as a child. N'Dour's talents soon attracted the support of top-rated musicians.

YIVO | Music: Traditional and Instrumental Music By the later sixteenth to early seventeenth centuries in Bohemia and then in the Polish–Lithuanian Commonwealth, Jewish musicians began to form their own guilds. The formation of guilds raised the social status of Jewish musicians, and led to the abandonment of the older term leyts (scoffer, clown), applied in Central Europe to singers, instrumentalists, clowns, and dancers, in favor of the new, more respectable term klezmer (from kele zemer, musical instruments or vessels of song; pl., klezmorim), designating exclusively an instrumentalist. The term klezmer made its way to Germany only in the eighteenth century, with the influx of Jewish musicians from Bohemia and Poland. Social History of the Klezmorim In areas where Gypsies (Rom) were never very numerous, especially Poland–Lithuania, klezmorim constituted the majority of professional musicians. Kapela Żydowska (Jewish band). Klezmer ensembles (di klezmer, kapelye, or khevrisa/khevrusa) were exclusively male. Music of the Klezmorim

Traditional Japanese Music - Koto - Virtual Culture The history of traditional music in Japan is rich and varied. Many musical forms were imported from China more than a thousand years ago, but over the years, they were reshaped into distinctively Japanese styles of expression. Instruments were adapted and newly created to meet local needs, and the most important of these were the shamisen, shakuhachi, and koto. The shamisen resembles a guitar; it has a long, thin neck and a small, rectangular body covered with skin. It's got three strings, and the pitch is adjusted using the tuning pegs on the head, just like a guitar or violin. The strings aren't plucked with the fingers; a large triangular plectrum is used to strike the strings. The shakuhachi is a flute made of bamboo that's played by blowing on one end. The koto, meanwhile, is a large, wooden instrument with 13 strings. Historians think the koto was born around the fifth to third century B.C. in China.

traditional musical instruments indonesia ~ AejicShare Angklung is a musical instrument multitonal (double pitched) is traditionally grown in theSundanese-speaking community in the western part of Java Island. This musical instrument made ​​of bamboo, sounded shaken by the way (the sound caused by impactbodies of bamboo pipes) so as to produce a vibrating sound in the arrangement of tones2, 3, and 4 tones in every size, both large and small. Angklung is listed as Masterpieces ofthe Oral and Cultural Heritage of UNESCO Human Nonbendawi since November 2010. Calung is a Sundanese musical instrument which is a prototype (prototype) of theangklung. Unlike the angklung is played by shaken, beating calung way is to hit the rod(wilahan, blades) of the joints (bamboo tubes) are arranged according to the barrel titi(scales) pentatonic (da-mi-na-ti-la) . Gamelan is a musical ensemble that usually highlight metallophones, xylophone, drums, and gongs. Rebana (Java Language: Fly) is a round drum-shaped and flat. Sasando is a stringed musical instrument.