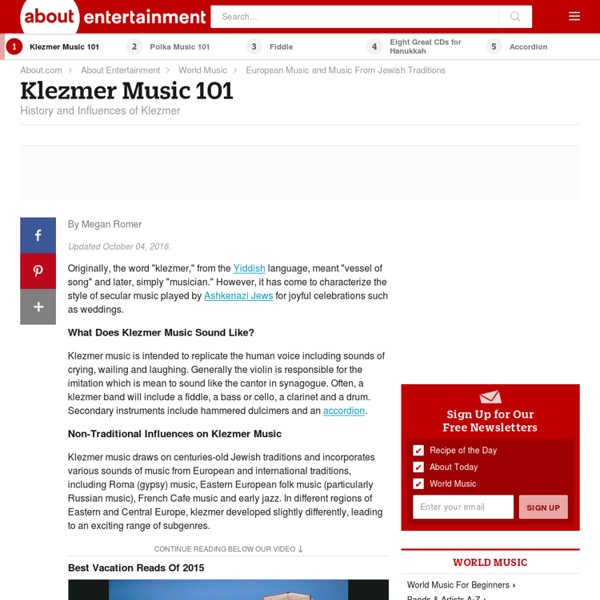 By Megan Romer Updated October 04, 2016. Originally, the word "klezmer," from the Yiddish language, meant "vessel of song" and later, simply "musician." However, it has come to characterize the style of secular music played by Ashkenazi Jews for joyful celebrations such as weddings. What Does Klezmer Music Sound Like? Klezmer music is intended to replicate the human voice including sounds of crying, wailing and laughing. Non-Traditional Influences on Klezmer Music Klezmer music draws on centuries-old Jewish traditions and incorporates various sounds of music from European and international traditions, including Roma (gypsy) music, Eastern European folk music (particularly Russian music), French Cafe music and early jazz. continue reading below our video Dancing to Klezmer Music Klezmer music is made for dancing. These klezmer pieces are meant for dancing, including fast and slow tempos: Klezmer Music and the Holocaust Recommended Klezmer Music Starter CDs

KLEZMER MUSIC Klezmer music originated in the 'shtetl' (villages) and the ghettos of Eastern Europe, where itinerant Jewish troubadours, known as 'klezmorim', performed at joyful events ('simkhes'), particularly weddings, since the early middle age till the Nazi and Stalinian prosecutions. It was inspired by secular melodies, popular dances, 'khazones' (khazanut, Jewish liturgy) as well as by the 'nigunim', the simple and often wordless melodies, intended by the 'Hasidim' (orthodox Jews) for approaching God in a kind of ecstatic communion. In (mutual) contact with Slavic, Greek, Ottoman (Turkish), Gypsy and -later- American jazz musicians, using typical scales, tempo and rhythm changes, slight dissonance and a touch of improvisation, the 'klezmorim' acquired the ability to evoke all kinds of emotions, through a very diversified music. back home "Klezmer: it's not just music - it's a way of life!" A klezmer kapelye (~1910) Attention, please: Pronounce 'kleZmer' and not 'kleTzmer'! Feidman Although

What is Jewish Music? Jewish music stems from ancient prayer chants of the Levant some 3000 years ago. The musical notation that developed and that we find in the bible today is one of the most ancient forms of notated music, and yet it is still in current practice all over the world today. Jewish music has been constantly adapting to new conditions and yet retaining its identity in many widely differing ethnic, social and religious environments. Through its daughter religions, the music of Judaism is one of the fundamental elements in the understanding of the sacred and secular traditions of Europe and the Near East, first having influenced, and then having been influenced by, the music of Christian and Islamic cultures. Ashkenazi Music (Klezmer) Ashkenazi refers to the Jews who settled in the Rhineland of South West Germany and Northern France from about the third century CE. Sephardi Music Israeli Music Synagogue Music Suppressed Music Western Classical Music Sources: Jewish Music Institute

The History of Klezmer Music | The New Klezmer Quintet Klezmer music originated in the ‘shtetl’ (villages) and the ghettos of Eastern Europe, where itinerant Jewish troubadours, known as ‘klezmorim’, performed at joyful events (‘simkhes’), particularly weddings, since the early middle age till the nazi and Stalinian prosecutions. It was inspired by secular melodies, popular dances, ‘khazones’ (khazanut, Jewish liturgy) as well as by the ‘nigunim’, the simple and often wordless melodies, intended by the ‘Hasidim’ (orthodox Jews) for approaching God in a kind of ecstatic communion. In (mutual) contact with Slavonic, Greek, Ottoman (Turkish), Gypsy and -later- American jazz musicians, using typical scales, tempo and rhythm changes, slight dissonance and a touch of improvisation, the ‘klezmorim’ acquired the ability to evoke all kinds of emotions, through a very diversified music. “Klezmer: it’s not just music – it’s a way of life!” (Hankus Netsky) shofar Klezmorim – Middle Ages Klezmorim – 18th Century Pedotser Guzikov A klezmer kapelye (~1910) Feidman

Klezmer Style of Jewish music Klezmer (Yiddish: כליזמר or קלעזמער (klezmer), pl.: כליזמרים (klezmorim) – instruments of music) is a musical tradition of the Ashkenazi Jews of Eastern Europe. Played by professional musicians called klezmorim in ensembles known as kapelye, the genre originally consisted largely of dance tunes and instrumental display pieces for weddings and other celebrations. In the United States the genre evolved considerably as Yiddish-speaking Jewish immigrants from Eastern Europe, who arrived between 1880 and 1924,[1] came into contact with American jazz. Compared with most other European folk-music styles, little is known about the history of klezmer music, and much of what is said about it remains uncertain. Etymology[edit] The term klezmer comes from a combination of Hebrew words: kli, meaning "tool, or utensil" and zemer, meaning "to make music"; leading to k'li zemer כְּלִי זֶמֶר, literally "vessels of song" = "musical instrument". Style[edit] History[edit] Repertoire[edit]

Peruvian Music The Peru music is a fusion of sounds and styles drawing on Peru's Andean, Spanish, and African roots. After hundreds years of cultural mixing, there have been created a broad musical landscape over Peru. Typical instruments used are, for example, the flute and the antara or zampoña, the box and the traditional guitar, which in Peru has also a smaller variant, known as the "charango" and mandolin. Before the Viceroyalty of Peru, much of the Peruvian territory constituted the Tahuantinsuyo uniting several of the oldest cultures such as Chavin, Paracas, Moche, Chimu, Nazca and 20 other minors, the ancient people of the Nazca culture, were the major Pre-Columbian musicians in the continent. Andean influences can be best heard in wind instruments and the shape of the melodies, the African influences is heard in the rhythm and percussion instruments, and European influences can be heard in the harmonies and stringed instruments. The Incas used a wide variety of musical instruments, some as:

the KlezmerShack A Brief History of Klezmer Music by Carl Dimow The term klezmer originally came from two Hebrew words referring to musical instruments. Over time it came to signify the musicians themselves, and in current usage it also refers to the musical genre - secular Jewish music - which dates back at least as far as the 16th century. The early klezmorim (plural) played primarily for Jewish weddings though they were also hired for other Jewish and non-Jewish events. Jews lived under a variety of ever changing legal restrictions in Europe which effected when and where the klezmorim could work. As the Jewish people moved throughout Central and Eastern Europe, the music was influenced by local cultures. Abraham Goldfaden (1840 - 1908) founded the first Yiddish theatre in Romania in the 1870’s. It was also around this period that the clarinet became the primary lead instrument in klezmer. The mass immigration of Jews to the U.S. between 1880 and 1920 coincided with the development of commercial recording technology.

Music of Indonesia The music of Indonesia demonstrates its cultural diversity, the local musical creativity, as well as subsequent foreign musical influences that shaped contemporary music scenes of Indonesia. Nearly thousands of Indonesian islands having its own cultural and artistic history and character.[1] This results in hundreds of different forms of music, which often accompanies by dance and theatre. Traditional regional musics and songs of Indonesia natively compromises of strong beat and harmony type musics with strong influence of California and Malay classical music. Musical instruments[edit] Balinese gamelan performance. SambaSunda music performance, featuring traditional Sundanese music instruments such as kecapi, suling, and kendang. Gamelan[edit] The most popular and famous form of Indonesian music is probably gamelan, an ensemble of tuned percussion instruments that include metallophones, drums, gongs and spike fiddles along with bamboo flutes. Kecapi suling[edit] Angklung[edit] Kulintang[edit]

Yiddish song Yiddish song is a general description of several genres of Jewish music sung in Yiddish which includes songs of Yiddish theatre, Klezmer songs, and "Yiddish art song" after the model of the German Lied and French mélodie. The Yiddish language and song[edit] From the fourteenth century secular songs were sung in Yiddish, though rabbis of the period directed that sacred songs were only to be sung in Hebrew.[1] Yiddish folk songs[edit] One of the main genres of Yiddish folk song in Central and Eastern Europe is Klezmer, which was also exported to America and Israel, though Henry Sapoznik (2005) writes "Historically, Yiddish song and theater have had a higher visibility than klezmer music in Israel Yiddish theatre songs[edit] Yiddish political and secular choral song[edit] Di Shvue "The Oath" (1902) was the Yiddish anthem of the socialist, General Jewish Labour Bund in early 1900s Russia. Yiddish art songs[edit] Selected Recordings[edit] Art song References[edit]

Klezmer Music In the Old World, klezmorim were the professional musicians who accompanied weddings and other special occasions in the Jewish community. They also played for the neighboring non-Jewish communities. This being the case, a proper klezmer had to know not only the standard Jewish repertoire but also the traditional dance tunes of the local peasants, as well as the light classical and popular music of the day favored by the nobility and the upper classes. (Interesting to note that non-Jewish musicians, especially those who were Roma [Gypsy], often played in klezmer bands. Since the 17th century, the principal musical instruments of traditional klezmer music were the fidl (violin), wooden transverse flute and tsimbl (hammer dulcimer). Of all the aforementioned, the fidl was perhaps the most emblematic of traditional vernacular music and life in the rural shtetl (small Jewish town). Klezmer flourished in the urban immigrant ghettos of the United States, especially New York City. Links: