America: Elect! The action-packed journey to US election day in graphic novel form 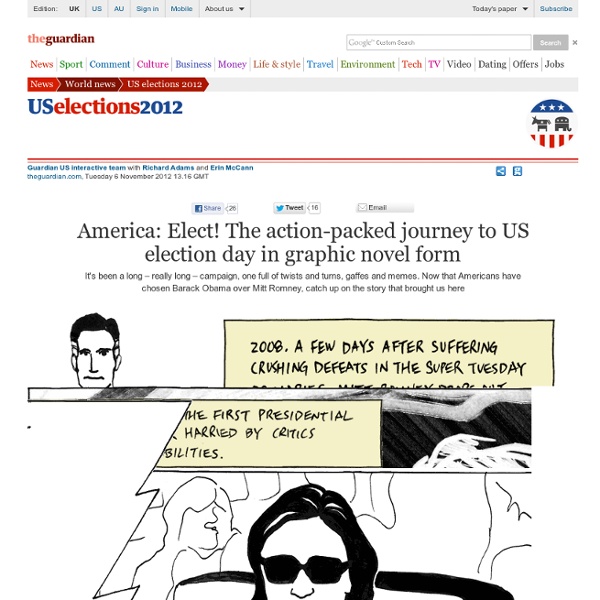 Obama To Clint Eastwood: This Seat's Taken In an apparent jab at Clint Eastwood's bizarre Republican National Convention speech, President Obama's reelection team tweeted out a photo of the president sitting in his designated Cabinet Room chair, declaring that "this seat's taken." This seat's taken. OFA.BO/c2gbfi, twitter.com/BarackObama/st…— Barack Obama (@BarackObama) August 31, 2012 On Thursday, actor Clint Eastwood made a surprise appearance at the Republican convention. Eastwood spent much of his odd turn on stage addressing an empty chair representing the president. Below, a look at some of Eastwood's most memorable lines from Thursday's speech: Loading Slideshow An Ecological Man"You are an -- an ecological man.

'Heart of Darkness' Gets an Animated Update on Instagram Heart of Darkness Official Trailer from Sascha Ciezata on Vimeo. From the Instagram account of animator Sascha Ciezata comes a modern reimagining of the Joseph Conrad classic, Heart of Darkness. Every night, Ciezata posts a 15-second chapter of his social media-based graphic novel using Instagram video, that follows the antics of Marley, his daring rodent cartographer modeled after Conrad’s protagonist, Charles Marlow. The series takes place amid the stormy saga that was Hurricane Sandy, throwing little Marley into the murky mayhem beneath the city’s abandoned streets. The quasi-realism of Ciezata’s adaptation is augmented with the multimedia style of his series. Related: [Premiere] Watch Inventions' Stormy New Video for 'Springworlds' A Gold-Making Machine Eats Memories in Short Film 'The Alchemist's Letter' PES Deconstructs His New Stop-Motion Masterpiece 'Submarine Sandwich'

Swingometer How to use the swingometer Move the pointer to the right for a swing to the Conservatives, or left for a swing to Labour. A swing into the red of Labour, for example, is a swing for the Conservatives and against Labour and vice-versa. As the pointer moves, the swing will change, with the seats changing colour to the party gaining them. The overall election result is shown above the swingometer, along with the predicted number of seats in the House of Commons won by each party. The names of seats predicted to fall with each swing are displayed on the right. Click on the highlighted numbers for more information about past elections with similar swings. There are three different swingometers to chose from. Things to remember The swingometer is not scientific, it just gives an indication of what may happen on particular swings to one party or another. Note that for a handful of seats on the wheel, a swing to the Liberal Democrats or Conservatives will mean a third party gains that seat. Feedback

Documentary Has The Future Covered | Gerry Flahive Documentary was once seen as the castor oil of cinematic genres: it was supposed to be "good for you," but it didn't taste very good. Aside from the fact that this just wasn't true -- the adjectives "boring" and "dutiful" applied equally to many dreary fiction films -- today documentary might be the coolest cultural form around, and new digital technologies are part of the reason documentaries are connecting with new audiences in innovative ways. Documentary films, at their very best, are exemplars of cinematic storytelling -- astonishing, delighting, inspiring and enlightening us, and doing so in ways fiction can't, by framing real life in ways we haven't considered before. Although some broadcasters have abandoned documentary in favour of reality television (which is akin to giving up a great painting for a really bad photocopy of it), audiences haven't. As it turns out, international audiences really like Canadian stories.

Election Day 2012 on Facebook Today is Election Day in the United States and Facebook is committed to encouraging people who use our service to participate in the democratic process. As a result, Facebook is focused on ensuring that those who are eligible to vote know where they can cast their ballots and, if they wish, share the fact that they voted with their friends. Similar to 2008 and 2010, U.S. Facebook users over age 18 will see a message at the top of their News Feed reminding them that it is Election Day and to go vote. The Facebook message will also contain a link to the Facebook Polling Place Locator ( an application that lets users find out where they can vote. We also will employ several social features that let people on Facebook encourage their friends to participate in Election Day. Users over age 18 will be able to click an “I’m Voting” or “I’m a Voter” button and post a story to their Facebook Timeline telling their friends that they have voted.

Election seat calculator The seat calculator is a rough way of converting percentage support for political parties into numbers of seats in parliament. It allows you to get an idea of what the next parliament might look like, and what sort of percentage support a party will need to win a majority. How it works Party seat totals are calculated by applying a uniform national swing. This assumes that for every seat in the country, each party's vote share changes by the same amount. So this is a crude model - in reality every seat is unique. Because of boundary changes - where seats are created, abolished and merged - the total number of seats in the House of Commons has changed over time. In the past therefore, parties have required different numbers of seats to win a majority and form a government. To make comparison easier we have taken the % vote share from these historic elections and shown what would happen if that result occurred with today's 650-seat House of Commons. More interactive guides