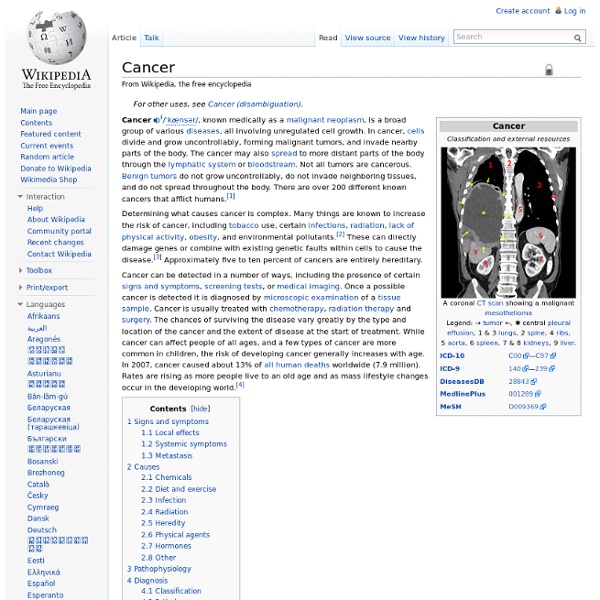 Cancer The causes of cancer are diverse, complex, and only partially understood. Many things are known to increase the risk of cancer, including tobacco use, dietary factors, certain infections, exposure to radiation, lack of physical activity, obesity, and environmental pollutants.[2] These factors can directly damage genes or combine with existing genetic faults within cells to cause cancerous mutations.[3] Approximately 5–10% of cancers can be traced directly to inherited genetic defects.[4] Many cancers could be prevented by not smoking, eating more vegetables, fruits and whole grains, eating less meat and refined carbohydrates, maintaining a healthy weight, exercising, minimizing sunlight exposure, and being vaccinated against some infectious diseases.[2][5] Cancer can be detected in a number of ways, including the presence of certain signs and symptoms, screening tests, or medical imaging. Definitions There is no one definition that describes all cancers. Signs and symptoms Causes

Asthma Asthma is thought to be caused by a combination of genetic and environmental factors.[4] Its diagnosis is usually based on the pattern of symptoms, response to therapy over time and spirometry.[5] It is clinically classified according to the frequency of symptoms, forced expiratory volume in one second (FEV1), and peak expiratory flow rate.[6] Asthma may also be classified as atopic (extrinsic) or non-atopic (intrinsic)[7] where atopy refers to a predisposition toward developing type 1 hypersensitivity reactions.[8] Signs and symptoms Associated conditions A number of other health conditions occur more frequently in those with asthma, including gastro-esophageal reflux disease (GERD), rhinosinusitis, and obstructive sleep apnea.[22] Psychological disorders are also more common,[23] with anxiety disorders occurring in between 16–52% and mood disorders in 14–41%.[24] However, it is not known if asthma causes psychological problems or if psychological problems lead to asthma.[25] Causes Others

Is Cancer Contagious? A healthy person cannot “catch” cancer from someone who has it. There is no evidence that close contact or things like sex, kissing, touching, sharing meals, or breathing the same air can spread cancer from one person to another. Cancer cells from one person are generally unable to live in the body of another healthy person. A healthy person’s immune system recognizes foreign cells and destroys them, including cancer cells from another person. Cancer transfer after organ transplant There have been a few cases in which organ transplants from people with cancer have been able to cause cancer in the person who got the organ. Still, recent studies have shown that cancer is more common in people who get solid-organ transplants than in people who don’t – even when the donor doesn’t have cancer. Cancer transfer during pregnancy Even if a woman has cancer during pregnancy, the cancer rarely affects the fetus directly. Germs can affect cancer risk. Viruses Bacteria Bacteria can also promote cancer.

Psoriasis No cure is available for psoriasis,[6] but various treatments can help to control the symptoms.[10][11] Though many treatments are available, psoriasis can be difficult to treat due to its chronic recurrent nature. The effectiveness and safety of a new generation of targeted immune therapies is being established with randomized controlled trials, and several have been approved (or rejected for safety concerns) by regulatory authorities. Signs and symptoms[edit] Plaque[edit] Psoriatic plaque, showing a silvery center surrounded by a reddened border. Psoriasis vulgaris (also known as chronic stationary psoriasis or plaque-like psoriasis) is the most common form and affects 85%–90% of people with psoriasis.[12] Plaque psoriasis typically appears as raised areas of inflamed skin covered with silvery-white scaly skin. A person's arm covered with plaque psoriasis Pustular[edit] Other skin lesions[edit] Psoriatic arthritis[edit] Nail changes[edit] Psoriasis of a fingernail, with visible pitting.

Sarcoma Classification[edit] Tissue[edit] Sarcomas are given a number of different names based on the type of tissue that they most closely resemble. Grade[edit] In addition to being named based on the tissue of origin, sarcomas are also assigned a grade (low, intermediate, or high) based on the presence and frequency of certain cellular and subcellular characteristics associated with malignant biological behavior. Types[edit] (ICD-O codes are provided, where available, along with the relevant edition.) Treatment[edit] Liposarcoma treatment consists of surgical resection, with chemotherapy not being used outside of the investigative setting. Epidemiology[edit] Sarcomas are quite rare with only 15,000 new cases per year in the United States.[9] Sarcomas therefore represent about one percent of the 1.5 million new cancer diagnoses in that country each year.[10] References[edit] External links[edit] Sarcoma at DMOZ

Diabetes mellitus type 1 Diabetes mellitus type 1 (also known as type 1 diabetes, or T1DM; formerly insulin dependent diabetes or juvenile diabetes) is a form of diabetes mellitus that results from the autoimmune destruction of the insulin-producing beta cells in the pancreas.[2] The subsequent lack of insulin leads to increased blood and urine glucose. The classical symptoms are polyuria (frequent urination), polydipsia (increased thirst), polyphagia (increased hunger), and weight loss.[3] While lack of care could be lethal, administration of insulin remains essential for the survival of these patients. Type 1 diabetes can be distinguished from type 2 by autoantibody testing - glutamic acid decarboxylase autoantibodies (GADA), islet cell autoantibodies (ICA), insulinoma-associated (IA-2) autoantibodies, and zinc transporter autoantibodies (ZnT8) are present in individuals with type 1 diabetes, but not type 2. Type 1 diabetes can lead to a number of complications, both in the short term and in the long term.

My Medical Choice MY MOTHER fought cancer for almost a decade and died at 56. She held out long enough to meet the first of her grandchildren and to hold them in her arms. But my other children will never have the chance to know her and experience how loving and gracious she was. We often speak of “Mommy’s mommy,” and I find myself trying to explain the illness that took her away from us. My doctors estimated that I had an 87 percent risk of breast cancer and a 50 percent risk of ovarian cancer, although the risk is different in the case of each woman. Only a fraction of breast cancers result from an inherited gene mutation. Once I knew that this was my reality, I decided to be proactive and to minimize the risk as much I could. Photo On April 27, I finished the three months of medical procedures that the mastectomies involved. But I am writing about it now because I hope that other women can benefit from my experience. It is reassuring that they see nothing that makes them uncomfortable.

Coeliac disease Coeliac disease, also spelled celiac disease, is an autoimmune disorder affecting primarily the small intestine that occurs in people who are genetically predisposed.[1] Classic symptoms include gastrointestinal problems such as chronic diarrhoea, abdominal distention, malabsorption, loss of appetite, and among children failure to grow normally. This often begins between six months and two years of age.[2] Non-classic symptoms are the most common, especially in people older than two years.[3][4][5] There may be mild or absent gastrointestinal symptoms, a wide number of symptoms involving any part of the body, or no obvious symptoms.[2] Coeliac disease was first described in childhood;[3][6] however, it may develop at any age.[2][3] It is associated with other autoimmune diseases, such as diabetes mellitus type 1 and thyroiditis, among others.[6] Signs and symptoms[edit] Gastrointestinal[edit] Malabsorption-related[edit] Miscellaneous[edit] Cause[edit] Other grains[edit] Risk modifiers[edit]