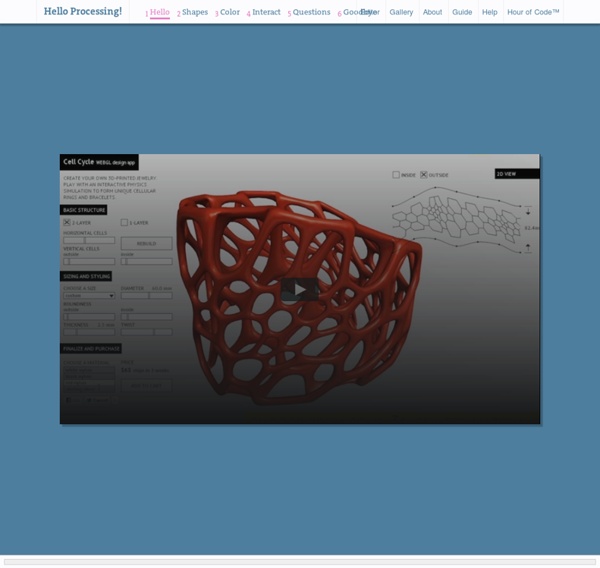 Hints after video one. This may never be seen? Draw a picture made of ellipses and rectangles! For example, you could make a self-portrait, an alien creature, or something more abstract. It'll just be black and white for now, we'll get to color in the next video. You can work on your own pace, but we recommend approximately ten minutes on this assignment before moving on. Reminders To draw a rectangle: rect(a,b,c,d); To draw an ellipse: ellipse(a,b,c,d); a — X (horizontal) location of the shape's upper-left cornerb — Y (vertical) location of the shape's uppper-left cornerc — width of the shaped — height of the shape For more, check out the rectangle and ellipse pages on processing.org. Add color to your design! You can build off the example below or add to your previous design by selecting "My Code from Last Lesson" under the "Code" menu below. Reminders Set the background color: background(r,g,b); Set the outline color: stroke(r,g,b); Set the interior color: fill(r,g,b); rect(250,200,100,75);

Arduino 101: Blink an LED Mini Rover Redux This project is based on work by MAKE magazine contributor Tom Zimmerman. Tom, who was... Hot/Cold LEDs What A Thug's Life Looked Like In 19th Century India : Code Switch hide captionA photograph of a group of elderly men sitting on a mat, taken in Peshawar, now in Pakistan, circa 1865. Two of the men are looking at each other with contempt, suggesting that they may actually be enemies who have been persuaded to be photographed together as examples of native "thugs." Getty Images Forms of Indian Paintings Indian paintings reflect opulent culture and heritage of the country. Ideas and expressions of artists are articulated through paintings. India is a geographically and culturally diverse country. As a result the paintings of India reflect different methodology and materials, but the basic concept or theme behind all the forms of paintings remain the same. Indian paintings boast of human figures and the beauty revolving around life. These paintings depict very much the time they were created in.

Planking (fad) and others meme A planking-like activity – called face dancing by its participants – was initiated in 1984 in Edmonds, Washington by Scott Amy and Joel Marshall.[2] The two high school age boys were walking in a park when they came upon a baseball game. They decided to lay face down in right field to see if anyone would react. No one did, but they had such a good time and laughed so much, they continued to do it for many years to come. The Ultimate Cheat Sheet For Reinventing Yourself Editor’s note: James Altucher is an investor, programmer, author, and several-times entrepreneur. His latest book, is “Choose Yourself!” (foreword by Dick Costolo, CEO of Twitter) . Follow him on Twitter @jaltucher. Here are the rules: I’ve been at zero a few times, come back a few times, and done it over and over. I’ve started entire new careers.

‎The Greatest Cover-Up in History ? How Imperial Britain's Racist India, Africa & China Narrative ‎Still Persists "Many hundreds of years before the coming of the English, the nations of India had been a collection of wealthy and highly civilised people, possessed of great language with an elaborate code of laws and social regulations, with exquisite artistic taste in architecture and decoration, producing conceptions which have greatly influenced the development of the most progressive races of the West." Henry Mayer Hyndman, 20th Century British politician. In the first three instalments of this Indian Independence Day series, I highlighted how India gave the modern world a panoply of its most prized gifts, from numerals, medicine and radio communications, to democracy, philosophy and multi-faceted spirituality. "Indian philosophers' subtleties make most of the great European philosophers look like schoolboys."

EU Code Week - more than just coding, more than just a week Do you know how to code? And do you know why it matters? Last week was the second ever EU code week. Hexspeak Using hexadecimal notation, which includes the digits 0123456789ABCDEF, it is possible to spell several words. Further words can be made by treating some of the decimal numbers as letters - the digit "0" can represent the letter "O", and "1" can represent the letters "I" or "L". Less commonly, "5" can represent "S", "7" represent "T", "12" represent "R" and "6" or "9" can represent "G" or "g" respectively. Numbers such as 2 or 8 can be used in a manner similar to leet or rebuses; e.g. the word "defecate" can be expressed either as DEFECA7E or DEFEC8. (2 bears a resemblance to Z, but because that letter is the least used in the English language, such a usage is rare.)[citation needed] Notable magic numbers[edit]

Processing for Android This tutorial gives you the basics of reading sensor data from Processing. Sensor API in the Android SDK Smartphones and tablets include many different types of sensors, for example accelerometers, gyroscopes, magnetometers, and thermometers. These sensors allow us to obtain information about the movement, environment, and position of the device. While the Processing language does not have specialized functions to read data from these sensors, you can import the packages in the Android SDK that receive sensor measurements into your sketch. Creating a sensor manager