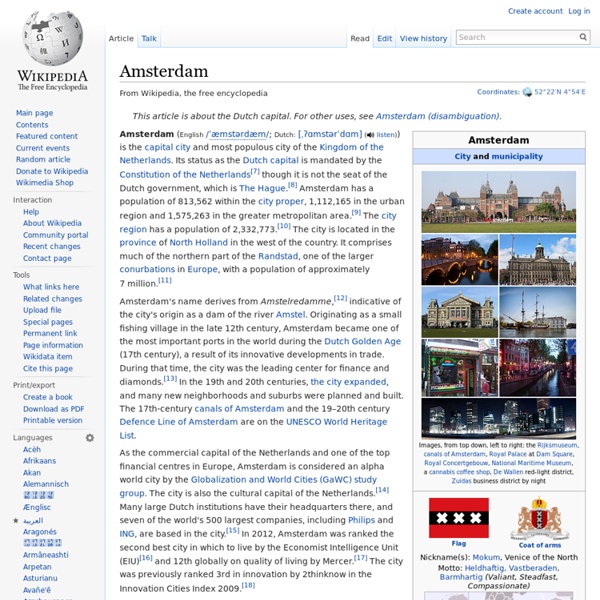 Amsterdam (English /ˈæmstərdæm/; Dutch: [ˌʔɑmstərˈdɑm]) is the capital city and most populous city of the Kingdom of the Netherlands. Its status as the Dutch capital is mandated by the Constitution of the Netherlands[7] though it is not the seat of the Dutch government, which is The Hague.[8] Amsterdam has a population of 813,562 within the city proper, 1,112,165 in the urban region and 1,575,263 in the greater metropolitan area.[9] The city region has a population of 2,332,773.[10] The city is located in the province of North Holland in the west of the country. It comprises much of the northern part of the Randstad, one of the larger conurbations in Europe, with a population of approximately 7 million.[11] Amsterdam's name derives from Amstelredamme,[12] indicative of the city's origin as a dam of the river Amstel. The Amsterdam Stock Exchange, the oldest stock exchange in the world, is located in the city center. §History[edit] §Etymology[edit] A woodcut depicting Amsterdam as of 1544.

Rotterdam Blitz The Rotterdam Blitz was the aerial bombardment of Rotterdam by the Luftwaffe (German air force) on 14 May 1940, during the German invasion of the Netherlands in World War II. The objective was to support the German troops fighting in the city, break Dutch resistance and force the Dutch to surrender. Even though preceding negotiations resulted in a ceasefire, the bombardment took place nonetheless, in conditions which remain controversial, and destroyed almost the entire historic city centre, killing nearly nine hundred civilians and leaving 30,000 people homeless.[contradiction] The psychological and physical success of the raid, from the German perspective, led the Oberkommando der Luftwaffe (OKL) to threaten to destroy the city of Utrecht if the Dutch Government did not surrender. The Dutch capitulated early the next morning. Prelude[edit] The Wehrmacht finally attacked the Netherlands in the early hours of 10 May 1940. Battle for Rotterdam[edit] The bombing[edit] Aftermath[edit]

Amsterdam Coffeeshop Directory Jameson Irish Whiskey - Drinks Discover what makes our triple distilled whiskey so smooth. First, we just have to check your age. Login with Facebook You must be of legal drinking age in the country in which you are accessing this site. By entering you agree to our terms & conditions and our privacy policy. JAMESON® Irish Whiskey. 40% Alc. Irish Distillers and Pernod Ricard encourage a responsible attitude to the consumption of alcohol and actively discourage abuse and inappropriate consumption.

Utrecht Utrecht (/ˈjuːtrɛkt/; Dutch pronunciation: [ˈytrɛxt] ( Utrecht is host to Utrecht University, the largest university of the Netherlands, as well as several other institutes for higher education. Due to its central position within the country, it is an important transport hub for both rail and road transport. It has the second highest number of cultural events in the Netherlands, after Amsterdam.[8] History[edit] Origins (until 650)[edit] Many of the features in Blaeu's 1652 map of Utrecht can still be recognised in the city center In Roman times, the name of the Utrecht fortress was simply Traiectum denoting its location at a possibility to cross the Rhine. From the middle of the 3rd century Germanic tribes regularly invaded the Roman territories. Centre of Christianity in the Netherlands (650–1579)[edit] The Dom tower, with to the left behind it the remaining section of the Dom church. By the mid-7th century, English and Irish missionaries set out to convert the Frisians. Geography[edit]

Curaçao (liqueur) Landhuis Chobolobo, where the liqueur was first made Curaçao liqueur was first developed and marketed by the Senior family in the 19th century.[1] To create the liqueur the laraha peel is dried, bringing out the sweetly fragranced oils. After soaking in a still with alcohol and water for several days, the peel is removed and other spices are added. A glass of Blue Curaçao liqueur The liqueur has an orange-like flavor with varying degrees of bitterness. Some other liqueurs are also sold as Curaçaos with different flavors added, such as coffee, chocolate, and rum and raisin. Media related to Blue Curacao at Wikimedia CommonsCuracao of Curacao Liqueur – Website of the original Curaçao LiqueurCuracao and Triple Sec – Website about Curaçao other Triple secs Helvetic Republic In Swiss history, the Helvetic Republic (1798–1803) represented an early attempt to impose a central authority over Switzerland, which until then consisted mainly of self-governing cantons united by a loose military alliance, and conquered territories such as Vaud. Its name was taken from the Helvetian people. The French invaded Switzerland and turned it into an ally known as the "Helvetic Republic." The interference with localism and traditional liberties was deeply resented, although some modernizing reforms took place.[1][2] Resistance was strongest in the more traditional Catholic bastions, with armed uprisings breaking out in spring 1798 in the central part of Switzerland. The French Army suppressed the uprisings but support for revolutionary ideals steadily declined, as the Swiss resented their loss of local democracy, the new taxes, the centralization, and the hostility to religion. History[edit] Strategic situation of Europe in 1796 Constitution[edit] Legacy[edit] Condominiums[edit]

Holiday park and amusement park Duinrell, a fun daytrip or a great family holiday Switzerland Switzerland (German: Schweiz[note 3] [ˈʃvaɪts]; French: Suisse [sɥis]; Italian: Svizzera [ˈzvittsera]; Romansh: Svizra [ˈʒviːtsrɐ] or [ˈʒviːtsʁːɐ]), officially the Swiss Confederation (Latin: Confoederatio Helvetica, hence its abbreviation CH), is a federal parliamentary republic consisting of 26 cantons, with Bern as the seat of the federal authorities, the so-called Bundesstadt aka "federal city".[1] The country is situated in Western and Central Europe,[note 4] where it is bordered by Italy to the south, France to the west, Germany to the north, and Austria and Liechtenstein to the east. Switzerland is a landlocked country geographically divided between the Alps, the Swiss Plateau and the Jura, spanning an area of 41,285 km2 (15,940 sq mi). While the Alps occupy the greater part of the territory, the Swiss population of approximately 8 million people is concentrated mostly on the Plateau, where the largest cities are to be found. Etymology[edit] History[edit] Early history[edit]

Holland Holland is a region and former province on the western coast of the Netherlands. The name Holland is also frequently used to informally refer to the whole of the country of the Netherlands. This usage is commonly accepted, especially outside of the Netherlands, but some individuals, particularly from the other parts of the Netherlands, dislike the use of "Holland" as a substitute for the "Netherlands",[2] or even find it insulting.[3] From the 10th to the 16th century, Holland proper was a unified political region within the Holy Roman Empire as a county ruled by the Counts of Holland. Today, the former County of Holland roughly consists of the two Dutch provinces of North Holland and South Holland, which together include the Netherlands' three largest cities: the capital city of Amsterdam; the seat of government of The Hague; and Rotterdam, home of Europe's largest port. §Etymology and terminology[edit] The people of Holland are referred to as "Hollanders" in both Dutch and English.

Thomas More Pope Pius XI canonised More in 1935 as a martyr of the schism that separated the Church of England from Rome; Pope John Paul II in 2000 declared More the "heavenly Patron of Statesmen and Politicians".[4] Since 1980, the Church of England has remembered More liturgically as a Reformation martyr.[5] In 2002, he was placed at number 37 in the BBC's poll of the 100 Greatest Britons.[6] Early life[edit] More began his studies at Oxford in 1492, and received a classical education. Studying under Thomas Linacre and William Grocyn, he became proficient in both Greek and Latin. More left Oxford after only two years—at his father's insistence—to begin legal training in London at New Inn, one of the Inns of Chancery.[9]:xvii[11] In 1496, More became a student at Lincoln's Inn, one of the Inns of Court, where he remained until 1502, when he was called to the Bar.[9]:xvii Spiritual life[edit] Family life[edit] More's decision to educate his daughters set an example for other noble families.