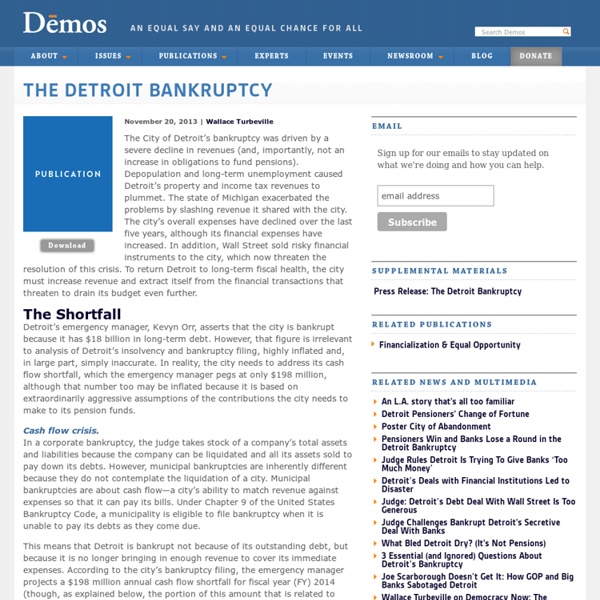 The Detroit Bankruptcy The City of Detroit’s bankruptcy was driven by a severe decline in revenues (and, importantly, not an increase in obligations to fund pensions). Depopulation and long-term unemployment caused Detroit’s property and income tax revenues to plummet. The state of Michigan exacerbated the problems by slashing revenue it shared with the city. The city’s overall expenses have declined over the last five years, although its financial expenses have increased. In addition, Wall Street sold risky financial instruments to the city, which now threaten the resolution of this crisis. The Shortfall Detroit’s emergency manager, Kevyn Orr, asserts that the city is bankrupt because it has $18 billion in long-term debt. Cash flow crisis. In a corporate bankruptcy, the judge takes stock of a company’s total assets and liabilities because the company can be liquidated and all its assets sold to pay down its debts. Total outstanding debt. Revenue Tax revenue. State revenue sharing. Expenses

Cookies are Not Accepted - New York Times “The auto industry supports one of every 10 jobs in the United States,” Gov. Jennifer M. Granholm of Michigan wrote in a CNN.com plea for a bailout of Detroit’s Big Three. The day before, she told “The Early Show” on CBS that “this industry supports one in 10 jobs in the country,” adding, “If this industry is allowed to fail, there will be a ripple effect throughout the nation.”

Detroit bus drivers speak out on bankruptcy, crisis in city bus system “What you have now is not a true government, it is a dictatorship” By our reporters 21 December 2013 For four years, Detroit residents have seen the already grossly inadequate public bus system gutted by cuts in public funding. Bus service in the city is now in daily acute crisis. Many workers have lost their jobs or faced disciplinary measures because buses on major routes are chronically late or so full they cannot pick up passengers. At least one third of Detroit residents do not have cars and must rely on buses to go to work or school, shop for groceries and get to medical appointments.

The rise and fall of Detroit: A timeline Sign Up for Our free email newsletters On Thursday, Detroit made history — and not in a good way. Auto workers, bus riders denounce Detroit bankruptcy ruling “The Democrats conspired with the Republicans on this” By Zac Corrigan 17 November 2014 Over the weekend, Detroit workers continued to voice their opposition to the Detroit bankruptcy plan approved by Judge Stephen Rhodes on November 7.

A new Detroit: Can the Motor City come back? ONE of this week's big American news stories was the release of new Census data for the state of Michigan, which revealed that the city of Detroit underwent a stunning population decline between 2000 and 2010. Detroit shrank by 25% during the decade, and its population fell to its lowest level since 1910—before the era of Big Three dominance. The city seems to be locked in a death spiral.

Detroit Rising: Life after bankruptcy One year after a federal judge approves Detroit's bankruptcy exit plan, progress has been made while looming challenges remain, especially city pensions The City of Detroit has more than enough cash to pay its daily bills. Thousands of busted streetlights have been replaced. City retirees still receive pension checks, and valuable paintings remain ensconced in the gilded halls of the Detroit Institute of Arts.

Detroit at the White House: Trump meets with Big Three auto CEOs - Jan. 23, 2017 In opening remarks to the press, Trump claimed he was already "bringing manufacturing back to the United States big league." He didn't talk about his threats to impose tariffs and border taxes on goods brought in from Mexico. Instead, he talked about incentives that would get automakers to build here, such as reduced corporate tax rates. The CEOs stayed at the meeting about an hour. Ford CEO Mark Fields praised the new administration as they left.

How Detroit went broke: The answers may surprise you — and don't blame Coleman Young Originally published Sept. 15, 2013 Detroit is broke, but it didn’t have to be. An in-depth Free Press analysis of the city’s financial history back to the 1950s shows that its elected officials and others charged with managing its finances repeatedly failed — or refused — to make the tough economic and political decisions that might have saved the city from financial ruin. Instead, amid a huge exodus of residents, plummeting tax revenues and skyrocketing home abandonment, Detroit’s leaders engaged in a billion-dollar borrowing binge, created new taxes and failed to cut expenses when they needed to. Simultaneously, they gifted workers and retirees with generous bonuses. And under pressure from unions and, sometimes, arbitrators, they failed to cut health care benefits — saddling the city with staggering costs that today threaten the safety and quality of life of people who live here.

Bailout debate: How the Big 3 came apart and how to fix them - Nov. 17, 2008 NEW YORK (CNNMoney.com) -- Why is the U.S. auto industry in such a precarious position? That question - and answers to it - will animate the debate this week over whether Washington should extend a lifeline to the Big Three. (For more, read Auto bailout: Showdown in Washington.)