How Academia Resembles a Drug Gang 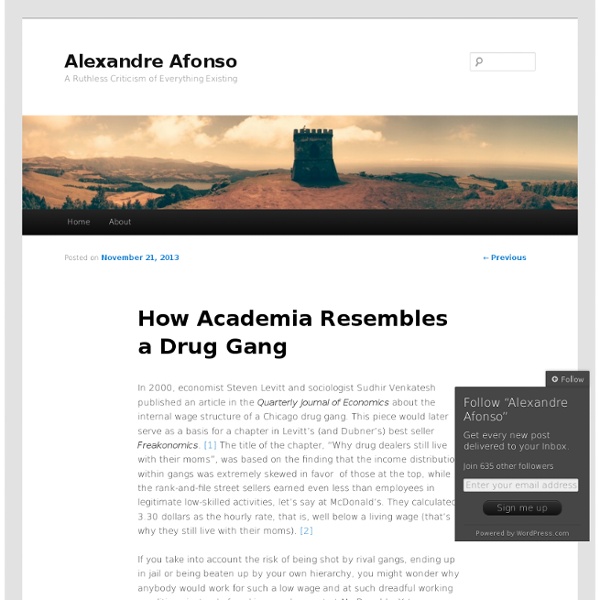 In 2000, economist Steven Levitt and sociologist Sudhir Venkatesh published an article in the Quarterly Journal of Economics about the internal wage structure of a Chicago drug gang. This piece would later serve as a basis for a chapter in Levitt’s (and Dubner’s) best seller Freakonomics. [1] The title of the chapter, “Why drug dealers still live with their moms”, was based on the finding that the income distribution within gangs was extremely skewed in favor of those at the top, while the rank-and-file street sellers earned even less than employees in legitimate low-skilled activities, let’s say at McDonald’s. They calculated 3.30 dollars as the hourly rate, that is, well below a living wage (that’s why they still live with their moms). [2] With a constant supply of new low-level drug sellers entering the market and ready to be exploited, drug lords can become increasingly rich without needing to distribute their wealth towards the bottom. Academia as a Dual Labour Market Like this:

Related:  HE & the reputation game • Humanities

How to Write a Research Statement Task #1: Understand the Purpose of the Research Statement The primary mistake people make when writing a research statement is that they fail to appreciate its purpose. The purpose isn’t simply to list and briefly describe all the projects that you’ve completed, as though you’re a museum docent and your research publications are the exhibits. “Here, we see a pen and watercolor self-portrait of the artist. Study finds that Ph.D.s who write interdisciplinary dissertations earn less Everyone, it seems, loves the idea of scholars interdisciplinary work. But does academe reward those -- particular young scholars -- who actually do it? A new study, based on data from all people who earned Ph.D.s in 2010, suggests the opposite. In the year after earning their doctorates, those in the cohort who did interdisciplinary dissertations earned, on average, $1,700 less than those who completed dissertations in a single field. The study was conducted by Kevin M.

How is humanities research reshaping our future? Humanities research often involves an individual professor researching in a library in order to write a book. The books that result from this study are part of an ongoing dialogue about the meaning and possibilities of human existence that reaches back to ancient times and looks forward to our common future. Scholar Collaboration However, humanities research also draws from other sources and often requires alternative methods of investigation. A research project may involve several professors from different universities sharing information in an on-line forum.

White definitions of merit and admissions change when they think about Asian Americans, study finds NEW YORK -- Critics of affirmative action generally argue that the country would be better off with a meritocracy, typically defined as an admissions system where high school grades and standardized test scores are the key factors, applied in the same way to applicants of all races and ethnicities. But what if they think they favor meritocracy but at some level actually have a flexible definition, depending on which groups would be helped by certain policies? Frank L. Samson, assistant professor of sociology at the University of Miami, thinks his new research findings suggest that the definition of meritocracy used by white people is far more fluid than many would admit, and that this fluidity results in white people favoring certain policies (and groups) over others. Specifically, he found, in a survey of white California adults, they generally favor admissions policies that place a high priority on high school grade-point averages and standardized test scores.

Funding the humanities: what story do we want to tell? Three quarters of a century ago, Virginia Woolf posed the question: if you had just three guineas to share, what would you support? In each age we face ostensibly insurmountable challenges that require choices to be made, resources to be allocated and areas to be ignored. This is particularly the case in the US, which has seen an explosion in the number of registered philanthropic organisations, as well as a rethinking of what it means to be philanthropic.

Universities should do more to keep women in science, say MPs Andrew Miller MP, Chair of the Committee, said: "It is astonishing that women still remain under-represented at professorial levels in academia across every scientific discipline. It’s time for universities to pull their socks up.”Some universities are doing a great job at improving working conditions for women scientists, but others are not. The system of short term contracts is hugely off-putting for many women scientists. More standardisation is required across the whole higher education sector and that is why we have called for Government, universities and research councils to review the academic careers structure, so that talented women, and men, can have more stable career pathways."

Opinion: Academic assessment gone mad Has accountability to stakeholders got out of hand? Steven Ward imagines an Orwellian world of over-assessment To: All Academic StaffFrom: The University AdministrationRe: A Modest Proposal for Improving the Assessment of Academic Staff Given the growing need for our nation’s universities to become more accountable to stakeholders, it has become increasingly apparent that our academic staff are severely under-assessed. To correct this urgent problem we will be expanding assessment beyond the usual areas of research and teaching into other areas of academic life. As is the case with previous assessment endeavours, this will produce valuable data to improve transparency and accountability and enhance the overall learning environment of our university.

Christina Paxson, President of Brown: Humanities Can Save Us The Economic Case for Saving the Humanities What can we do to make the case for the humanities? Unlike the STEM disciplines (science, technology, engineering, and mathematics), they do not—on the surface—contribute to the national defense. It is difficult to measure, precisely, their effect on the GDP, or our employment rates, or the stock market. And yet, we know in our bones that secular humanism is one of the greatest sources of strength we possess as a nation, and that we must protect the humanities if we are to retain that strength in the century ahead. I do not exactly hail from the center of the humanities.

When May I Shoot a Student? BOISE, Idaho — TO the chief counsel of the Idaho State Legislature: In light of the bill permitting guns on our state’s college and university campuses, which is likely to be approved by the state House of Representatives in the coming days, I have a matter of practical concern that I hope you can help with: When may I shoot a student? I am a biology professor, not a lawyer, and I had never considered bringing a gun to work until now. But since many of my students are likely to be armed, I thought it would be a good idea to even the playing field. I have had encounters with disgruntled students over the years, some of whom seemed quite upset, but I always assumed that when they reached into their backpacks they were going for a pencil.

As Interest Fades in the Humanities, Colleges Worry STANFORD, Calif. — On Stanford University’s sprawling campus, where a long palm-lined drive leads to manicured quads, humanities professors produce highly regarded scholarship on Renaissance French literature and the philosophy of language. They have generous compensation, stunning surroundings and access to the latest technology and techniques of scholarship. The only thing they lack is students: Some 45 percent of the faculty members in Stanford’s main undergraduate division are clustered in the humanities — but only 15 percent of the students. This article has been revised to reflect the following correction:

Bursaries fail to help poor students stay the course Shift to outreach, Ebdon says, as Offa finds no link between awards and retention Source: Alamy Size doesn’t matter: continuation rates were similar whatever the award sum Oxford survey finds humanities degrees pay Long-term study of alumni careers questions coalition’s STEM emphasis Source: Alamy Questionable figures: results of a study cast doubt on the government’s prioritisation of funds for science subjects The University of Oxford has used a study of its humanities graduates’ careers to question the government’s financial prioritisation of science students, a policy it claims was “formulated without an evidence base”. Oxford has tracked the fortunes of around 11,000 alumni who joined the university between 1960 and 1989 and concludes that they have played a growing role in emerging UK industrial sectors, particularly finance and law.