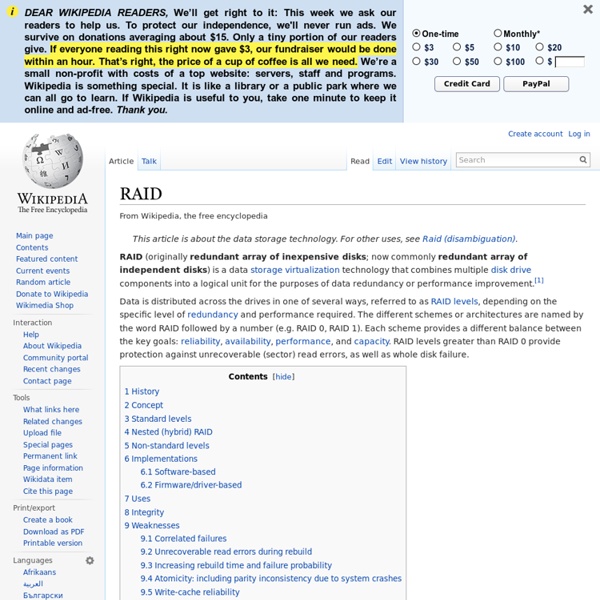 RAID (originally redundant array of inexpensive disks; now commonly redundant array of independent disks) is a data storage virtualization technology that combines multiple disk drive components into a logical unit for the purposes of data redundancy or performance improvement.[1] History[edit] Although not yet using that terminology, each of the five levels of RAID named in the paper were well established in the art prior to the paper's publications, for example: Around 1983, DEC began shipping subsystem mirrored RA8X disk drives (now known as RAID 1) as part of its HSC50 subsystem.[3]Around 1988, the Thinking Machines DataVault used error correction codes (now known as RAID 2) in an array of disk drives.[4] A similar approach was used in the 1970s on the IBM 3330.[5]In 1977, Norman Ken Ouchi at IBM filed a patent disclosing what was subsequently named RAID 4.[6]In 1986, Clark et al. at IBM filed a patent disclosing what was subsequently named RAID 5.[7] Concept[edit] Standard levels[edit]

Standard RAID levels In computer storage, the standard RAID levels comprise a basic set of RAID configurations that employ the techniques of striping, mirroring, or parity to create large reliable data stores from multiple general-purpose computer hard disk drives (HDDs). The most common types are RAID 0 (striping), RAID 1 and its variants (mirroring), RAID 5 (distributed parity), and RAID 6 (dual parity). RAID levels and their associated data formats are standardized by the Storage Networking Industry Association (SNIA) in the Common RAID Disk Drive Format (DDF) standard.[1] RAID 0[edit] Diagram of a RAID 0 setup RAID 0 (also known as a stripe set or striped volume) splits data evenly across two or more disks (striped), without parity information and with speed as the intended goal. A RAID 0 setup can be created with disks of differing sizes, but the storage space added to the array by each disk is limited to the size of the smallest disk. Performance[edit] RAID 1[edit] Diagram of a RAID 1 setup RAID 2[edit] .

Welcome to Pando | Thanks for Sharing RAID Levels Explained If you've ever looked into purchasing a NAS device or server, particularly for a small business, you've no doubt come across the term "RAID." RAID stands for Redundant Array of Inexpensive (or sometimes "Independent") Disks. In general, a RAID-enabled system uses two or more hard disks to improve the performance or provide some level of fault tolerance for a machine—typically a NAS or server. The way in which you configure that fault tolerance depends on the RAID level you set up. RAID Overview RAID is traditionally implemented in businesses and organizations where disk fault tolerance and optimized performance are must-haves, not luxuries. Software RAID means you can setup RAID without need for a dedicated hardware RAID controller. This type of RAID is available in other operating systems as well, including OS X Server, Linux, and Windows Servers. Which RAID Is Right for Me? Here's the rundown on popular RAID levels: •RAID 0 is used to boost a server's performance.

RAID Definition from PC Magazine Encyclopedia (Redundant Array of Independent Disks) A disk subsystem that increases performance or provides fault tolerance or both. RAID uses two or more physical disk drives and a RAID controller, which is plugged into motherboards that do not have RAID circuits. Today, most motherboards have built-in RAID but not necessarily every RAID configuration (see below). In the past, RAID was also accomplished by software only but was much slower. In large storage area networks (SANs), floor-standing RAID units are common with terabytes of storage and huge amounts of cache memory. RAID 0 - Disk Striping for Performance (Popular) Widely used for gaming, disk striping interleaves data across multiple drives for performance. RAID 1 - Mirroring for Fault Tolerance (Popular) Widely used, RAID 1 writes two drives at the same time. RAID 10 combines RAID 1 mirroring with RAID 0 striping for both safety and performance. Big RAID Little RAID Arco was first to provide RAID 1 on IDE drives rather than SCSI. Early RAID

RAID Made Easy What is RAID, why do you need it, and what are all those mode numbers that are constantly bandied about? RAID stands for “Redundant Array of Independent Disks” or “Redundant Array of Inexpensive Disks,” depending on who you talk to. Note that the word array is included in the acronym, so saying “RAID array,” as a lot of people do, is redundant. Back when hard drives were less capacious and more expensive, RAID was created to combine multiple, less-expensive drives into a single, higher-capacity and/or faster volume. On top of that, it was designed to facilitate redundancy, also known as fault tolerance or failover protection, so that the array and its data remain usable when a drive fails. You’ll often hear about 1-disk or 2-disk redundancy, which refers to the number of drives that can fail while the array remains viable. Redundancy is important for a small business, as drive failure does happen. You may have as many pairs of mirrored drives as your RAID controller allows.