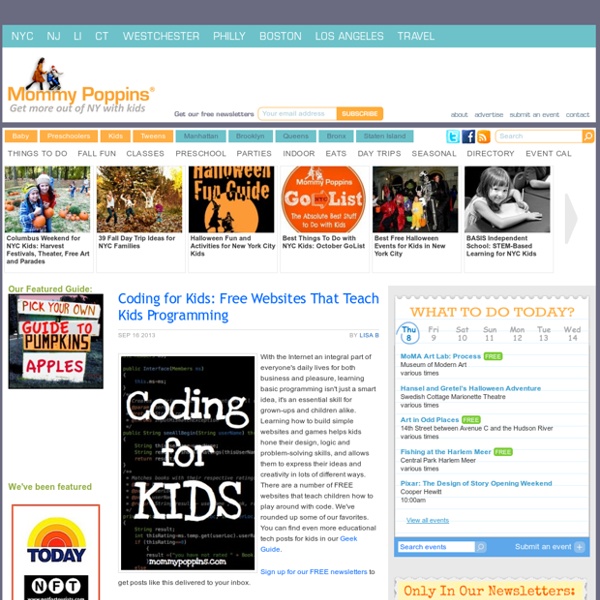 With the Internet an integral part of everyone's daily lives for both business and pleasure, learning basic programming isn't just a smart idea, it's an essential skill for grown-ups and children alike. Learning how to build simple websites and games helps kids hone their design, logic and problem-solving skills, and allows them to express their ideas and creativity in lots of different ways. There are a number of FREE websites that teach children how to play around with code. We've rounded up some of our favorites. You can find even more educational tech posts for kids in our Geek Guide. Sign up for our FREE newsletters to get posts like this delivered to your inbox. Code.org – This nonprofit foundation website is a great starting point for coding novices. Scratch – Designed by MIT students and aimed at children ages 8 to 16, this easy-to-use programming language lets kids build almost anything they can dream up. Looking to teach your kids code on the go?

The Best Tools and Apps for Flipped Learning Classroom July 25, 2014 Following the posting of "Managing iPad Videos in Schools" somebody emailed me asking about some suggestions for tools and apps to create instructional videos to use in a flipped learning setting. In fact, over the last couple of years I have reviewed several web tools and iPad apps that can be used in flipped classroom but the ones I am featuring below are among the best out there. 1- Educlipper Educlipper is a wonderful tool for creating video tutorials and guides to share with students. As a teacher you can create an Educlipper board for your class and share the link with them. See The World’s Most Spoken Languages In One Eye-Opening Infographic Around the world there are a total of 7,102 known languages, of this gargantuan amount twenty-three remain popular enough to be considered the most spoken languages of the world. These 23 languages are considered the mother tongue for more than 50 million people and the native tongue for more than 4.1 billion people. To put this into perspective there are currently around 7.2 billion people living on planet earth. The circle represents the 4.1 billion people around the world that speak one of the 23 most spoken languages. The graphic further breaks down these numbers by the amount of people that speak a given language according to country. Infographic artist Alberto Lucas Lopez created this interesting breakdown for the South China Morning Post.

Code Monster from Crunchzilla <h2>Code Monster gets kids excited about programming. It is a combination of a game and tutorial where kids experiment with learning to code. <p> Code Monster use Javascript. 7 Characteristics Of Teachers Who Effectively Use Technology 7 Characteristics Of Teachers Who Effectively Use Technology by TeachThought Staff Ed note: This post has been updated with an updated visual from Sylvia Duckworth, who took our graphic from alwaysprepped.com (now getalma) post and created the above visual. It is also sporting a new title, as the “habits of” is a trademarked term. As such, the new graphic and phrasing appears below. You can also see Sylvia’s tutorial on sketchnotes here.

Agnes Water, Queensland: Lagoons 1770 Resort and Spa and Heron Island It's early morning as we meander along the bush trail to the pristine Workman's Beach at Agnes Water, Queensland's most northerly surfing beach. The wind is blowing a gale on the other side of the peninsula, and the sand is cool beneath our bare feet. Here, however, it's protected from the biting wind. We unroll our yoga mats and sit for a moment, eyes closed, feeling the fresh air and the warmth of the sun on our faces. As I open my eyes, a huge fish leaps exuberantly from the Coral Sea as waves crash on the shore. Magazine - The 5 Most Educational MOOC Android Apps - Appszoom Education is one of the sectors in which innovation in technology is changing the rules of the game faster than ever. The appearance of MOOCs (Massive Open Online Course) questions the unaccommodating nature of the present educational system and instead offers us an updated, more accessible and more affordable way to learn. MOOCs take flexible education to the extreme; you can choose what content you want, how you take the info in, and in many cases, how much you pay for it. This type of "à la carte" education is designed to be used whenever and wherever the user decides, and so it fits in perfectly with the roaming nature of us and our mobiles. If you're ready to jump on board this new trend in learning, don't miss today's list: 5 of the best MOOC apps for Android and iOS. Check this out: 5 Groundbreaking Apps For Learning How To Code

Teachers Using Trello: How To Foster Genius In The Classroom D’aww… the feeling is mutual, guys. Are you smarter than a fifth grader? Surely not these Geniuses, because they’re using Trello to answer the tough questions. The concept of Genius Hour has become a popular mechanism for educators to encourage their students to explore their interests. To avoid gaps in learning, much of the US curriculum is standardized. Lake Argyle, the Kimberley, helicopter flights: Australia's overlooked man-made wonder A new tourism venture in remote Kimberley offers a thrilling and awe-inspiring helicopter flight over Lake Argyle. I've fallen in love – and not just with the man sitting in the chopper beside me. Instead of holding his hand and squeezing it tenderly, I'm gazing dewy-eyed at the vertical valleys dropping away beneath me as we leap-frog over sheer ridges textured by time. With the air whipping around my door-free cage and the buzz of blades in my headset-cupped ears, I've forgotten he's even there. My heart's been stolen by the endless Kimberley landscape of rusty reds and royal blues that have been etched into the earth over millions of years. Tracing the West Australian region's dramatic contours by helicopter is one hell of a way to get the emotions pumping.

Learn Tips & Hints Tips and hints that you might find useful as you explore ScratchJr. For answers to more general questions about ScratchJr, see the Frequently Asked Questions. Children of Satan: What do their disturbing tales of bloody rituals mean? Fiona Burns, of Melbourne, reportedly spoke of Satanic rituals before her murder. Source: News Limited IT WAS the chilling story that horrified affluent families in a leafy north London suburb. Two young children, known as P and Q, appeared in a disturbing YouTube video, describing satanic rituals performed by a shadowy cult. In hours of footage, they talked about how the devil-worshippers preyed on the wealthy community, holding pedophilic orgies and murdering innocent people.

Should we teach our children to share? Or let them work it out themselves To share or not to share: That is the question. Photo: Getty A new parenting trend focuses on parents dictating less and leaving children to behave in line with their "natural inclination". The belief is that the child can eventually figure out they should do the "right" thing for the sake of doing what is right, not because their parents told them to, or offered a reward.