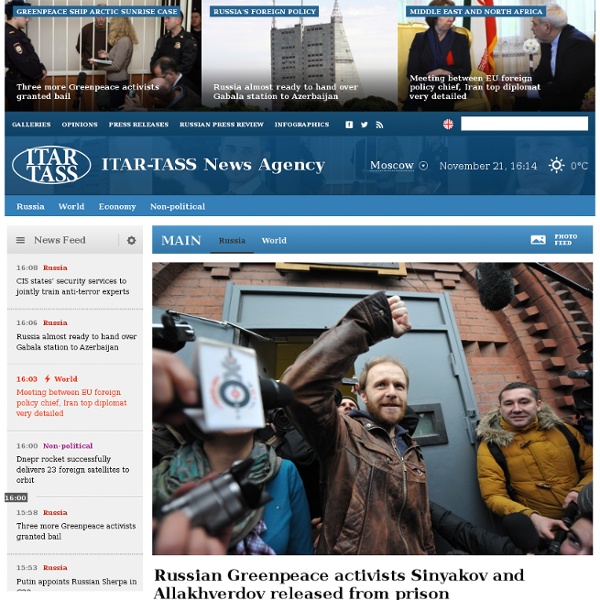 Johnson's Russia List Government, Politics, Elections, Protests - archive :: Putin Urges Duma Dominance as Medvedev Promotes New Parties Opposition leaders who organized protests that erupted after alleged Duma election fraud in December say that a new law proposed by lame duck president Medvedev will not prevent authorities from blocking the formation of parties wishing to compete in elections ... Ilya Arkhipov and Stepan Kravchenko, Bloomberg ; JRL 2012-62, 4.4.12 :: Moscow Region Governor to Leave Post in May The powerful governor of the Moscow region will step down once his term ends in May, signaling that the Kremlin is serious about removing unpopular governors before the possible return of direct gubernatorial elections this year ...

Study: You Have 'Near-Zero' Impact on U.S. Policy The startling study, titled "Testing Theories of American Politics: Elites, Interest Groups, and Average Citizens," is slated to appear in an upcoming issue of Perspectives on Politics and was authored by Princeton University Professor Martin Gilens and Northwestern University Professor Benjamin Page. An early draft can be found here. Noted American University Historian Allan J.

Mail Online Anthony Owen, 68, was found unconscious 20 yards from his home, next to his white Honda civic, which was still running Witnesses reported seeing three youths on BMX bikes cycling away from Mr Owen's home on millionaires' row in Hale Village, near Liverpool By James Tozer Published: 19:45 GMT, 20 March 2012 | Updated: 18:02 GMT, 21 March 2012 Head injuries: Anthony Owen died a week after being found unconscious just 20 yards from his home Russia Press Review Domenico Dispenza, president of the International Group of LNG Importers and former chief operating officer of Eni‘s gas and power division, speaks to Interfax about the group‘s new report on global LNG imports for 2013. more Interfax spoke to Dr. Leonhard Birnbaum, member of the board of management for markets and services at E.On, about the energy balance in Europe and gas’s place in it.

Bhutan Coordinates: Bhutan (Dzongkha: འབྲུག་ཡུལ་; Wylie transliteration: ʼbrug-yul "Druk Yul"), officially the Kingdom of Bhutan, is a landlocked country in South Asia located at the eastern end of the Himalayas. It is bordered to the north by China and to the south, east and west by India. Après Nous, Le Déluge I can perform all the economic analysis in the world, and it won’t convey the sheer apprehension I feel about China’s current situation anywhere near as well as the following pictures, found on ChinaSmack. The gold-encrusted hallways, marble foyers, and imposing granite frontage are not from Versailles, or the Vatican, or even Caesar’s Palace in Las Vegas. They are from the newly completed corporate headquarters of state-owned Harbin Pharmaceutical, in northeast China. No word on exactly how much the literally palatial offices cost to construct, but the mind boggles. One prominent journalist from Chinese state TV severely criticized the company for its garish use of funds, explicitly comparing it to the Palace of Versailles, but some netizens posting online defended the monument as a natural expression of China’s prosperity: What happened…?

The Ukraine, Corrupted Journalism, and the Atlanticist Faith - The Unz Review The European Union is not (anymore) guided by politicians with a grasp of history, a sober assessment of global reality, or simple common sense connected with the long term interests of what they are guiding. If any more evidence was needed, it has certainly been supplied by the sanctions they have agreed on last week aimed at punishing Russia. One way to fathom their foolishness is to start with the media, since whatever understanding or concern these politicians may have personally they must be seen to be doing the right thing, which is taken care of by TV and newspapers. In much of the European Union the general understanding of global reality since the horrible fate of the people on board the Malaysian Airliner comes from mainstream newspapers and TV which have copied the approach of Anglo-American mainstream media, and have presented ‘news’ in which insinuation and vilification substitute for proper reporting. This inevitably also informs ‘responsible’ editorial policies.

Palestine: the world's next nation This map shows in green countries that support recognising Palestine as a state. 252,265 have signed the petition. We reached our target of 1 million before the UN General Assembly on September 19th. American Pravda: Who Shot Down Flight MH17 in Ukraine? - The Unz Review Last year I published Our American Pravda, making the case for the utter corruption and unreliability of the mainstream American media, both in the past and especially in recent years. The enormous lacunae I daily noticed in the pages of The New York Times, The Wall Street Journal, and other leading media outlets were a major motivation behind my creation of The Review, whose readership has grown enormously in recent weeks. A perfect example of this dangerous MSM “conspiracy of silence” may be found in the growing confrontation with Russia over Ukraine, greatly accelerated by the death of almost 300 passengers aboard Malaysian Airlines Flight 17, shot down last month over Eastern Ukraine. The American media and its Western counterparts have almost unanimously placed the blame on anti-government rebels backed by Russia, and darkly insinuate that Russian President Vladimir Putin has the blood of those hundreds of innocent lives on his hands. Also, the blogsite of Col.

Janet McKenzie: Sacred Art and the Feminine Spirit Jesus of the People c. Janet McKenzie (detail)(image by Photo credit Lightworks, (Winooski, VT), art c. Janet McKenzie) First unveiled on NBC's Today Show in 2000, Janet McKenzie's painting, Jesus of the People was the first place winner of the National Catholic Reporter's global competition to identify an image of Jesus for the New Millennium. Janet paints multicultural images which honor gender and race, spotlightighting women and people of color, both of which she notes are under-represented in iconic Christian imagery.