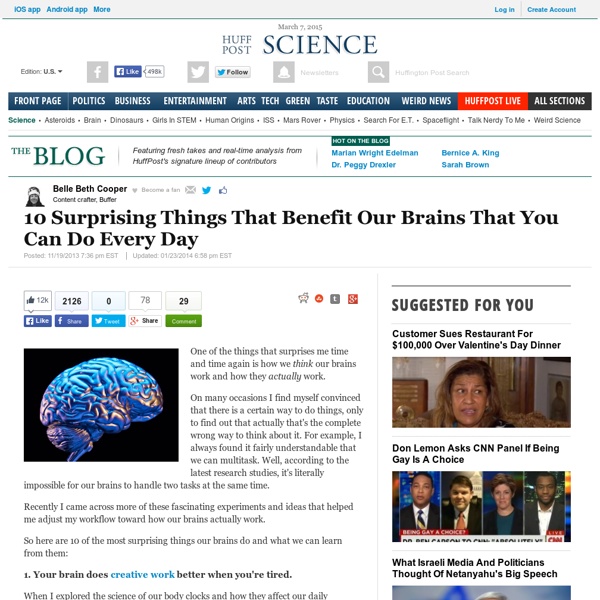 One of the things that surprises me time and time again is how we think our brains work and how they actually work. On many occasions I find myself convinced that there is a certain way to do things, only to find out that actually that's the complete wrong way to think about it. For example, I always found it fairly understandable that we can multitask. Recently I came across more of these fascinating experiments and ideas that helped me adjust my workflow toward how our brains actually work. So here are 10 of the most surprising things our brains do and what we can learn from them: 1. When I explored the science of our body clocks and how they affect our daily routines, I was interested to find that a lot of the way I'd planned my days wasn't really the best way to go about it. Here's how it breaks down: If you're a morning lark, say, you'll want to favor those morning hours when you're feeling fresher to get your most demanding, analytic work done. 2. 3. 4. Improved Memory Better Learning

The Lies Your Mind Tells You to Prevent Life Changes The Mammalian Pineal Gland May Be The Third Eye | Pureinsight Author: Prof. Lili Feng and et al 'Modern medical dissection has already discovered that the front section of the pineal gland is equipped with the complete structure of a human eye. Because it grows inside one's skull, it is thus said to be a vestigial eye. Whether it is a vestigial eye or not, our community of cultivators has reservations. In recent years, scientists gradually discovered that the mammalian pineal gland is photo sensitive. Photic information reaches it via a multi synaptic pathway originating in retina and passing through suprachiasmatic regions of the hypothalamus (1). Five years after the publication of Zhuan Falun, Lucas et al. (5) published a paper in Science, one of the most well known scientific journals. It is well known, with neither retinal photoreceptors nor optic signal transduction pathways, that the conventional visual pathway cannot be established. On the contrary, much evidence suggests that the pineal gland may be able to directly sense the light. 1.