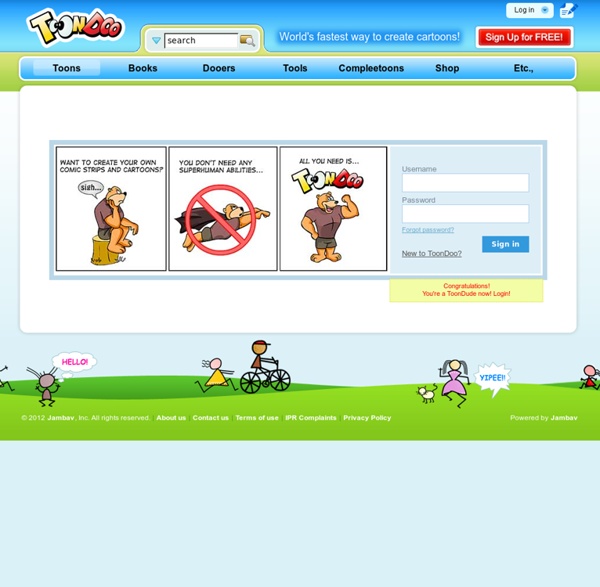 Google Slides - create and edit presentations online, for free. One account. All of Google. Sign in to continue to Slides Find my account Forgot password? Genius app instantly solves math problems by using a phone's camera A few years after I was done with any sort of schooling, I was having breakfast at a diner I frequented at the time. I knew one of the waitress and her family personally. Her daughter was a teen, struggling with math. I don't care for math. The only math I need to know is to spend less than I make and all the other basics for being alive. Well the mother asked me to help her daughter because she was going to fail her big test.

visualizing.org: a New Shared and Free Resource on Data Visualization Visualizing [visualizing.org] has just been released as the latest online player in the ever-increasing blogosphere about the topic of data visualization. But Visualizing is different in many ways. For one, the man behind the Visualizing initiative is Adam Bly, founder and Editor-in-Chief of Seed and one of the people behind the impressive Design and the Elastic Mind exhibition at MoMA. Movie Segments to Assess Grammar Goals: Imagine That: Quantifiers - Countable x Non Countable This is a movie for the whole family. It is about a highly imaginative gilr whose imaginary world halps her dad succeed in his business deals. This charming scene is great for quantifiers practicing, especially expressions that go with count and/or non-count nouns. A. Write the quantifiers below in the correct column:

6 New Mac Apps for Designers and Developers This series is supported by Rackspace, the better way to do hosting. Learn more about Rackspace's hosting solutions here. Mac OS X is a popular platform for developers and designers of all stripes. Talking About Your Hobbies In English When you want to get to know someone, ask about their hobbies and interests. Talking about hobbies means you can share details about yourself – and discover shared interests and free-time activities. Here are some phrases you can use: Questions you can ask

Apple Opens Up iAd Creation to the Masses In an indication that the company will no longer be so tight-fisted about control of its iAd creation, Apple today rolled out iAd Producer, a free desktop app that lets third parties make iAds. iAd Producer "makes it easy for you to design and assemble high-impact, interactive content for iAd," the company writes on its Apple Developer page, adding that the app "automatically manages the HTML5, CSS3 and JavaScript" behind iAds. By making the creation of iAds available via a graphic user interface, the app effectively removes the need for advanced development acumen.

in spanish Courses Cybersecurity Launch your career in a high demand industry that projects 2 million new jobs annually by earning a Cybersecurity MicroMasters Credential from RIT. MicroMasters Program Free Technology for Teachers: TwistedWave - Create Audio Recordings and Save Them in Google Drive TwistedWave is a new audio recording and editing tool that is now included in Next Vista's list of recommended tools. Through TwistedWave you can create and edit spoken audio recordings from scratch. Your completed tracks can be exported to Google Drive and SoundCloud. If you have existing audio tracks in your SoundCloud or Google Drive account you can also import it into TwistedWave to edit those audio tracks.

Adobe issues CSS Web publishing prototype SAN FRANCISCO--Hoping to bring magazine-style layout tools to Web publishing, Adobe Systems tonight released a prototype browser specifically designed to let Web developers test the company's proposed formatting technology. The technology, called CSS Regions, lets programmers easily create multi-column layouts, place text in various polygonal shapes, and flow around objects in the middle of text. That technology has existed for years in the print publishing world, but it's generally missing from the Web, and its absence grows ever more conspicuous as magazines and newspapers move to digital publishing, especially on tablets such as Apple's iPad. The formatting features are notable, particularly because they're dynamic, said Arno Gourdol, director of engineering for the Flash runtime at Adobe. With them, layouts adjust automatically as people resize browser windows or roate tablets from portrait to landscape orientation. Adobe's CSS Regions technology can be downloaded from Adobe Labs.