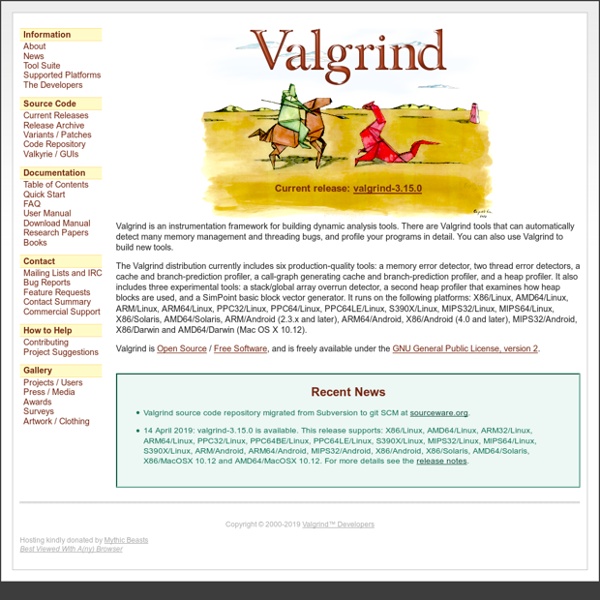 Current release: valgrind-3.9.0 Valgrind is an instrumentation framework for building dynamic analysis tools. There are Valgrind tools that can automatically detect many memory management and threading bugs, and profile your programs in detail. You can also use Valgrind to build new tools. The Valgrind distribution currently includes six production-quality tools: a memory error detector, two thread error detectors, a cache and branch-prediction profiler, a call-graph generating cache and branch-prediction profiler, and a heap profiler. It also includes three experimental tools: a stack/global array overrun detector, a second heap profiler that examines how heap blocks are used, and a SimPoint basic block vector generator.

Android Reverse Engineering (A.R.E.) Malwares on mobile system are increasing dramatically, especially on android smartphone system, this week Trendmicro security lab posted about new campaign targeting this system by infecting users over web applications (One-Click Billing Fraud Scheme Through Android App Found). After infecting the smartphone with ANDROIDOS_FAKETIMER some information will be sent to certain URL’s on the web, the information includes Gmail account, Sim information and mobile number. This is not the first case reported by Trendmicro there are previous similar attacks that are targeting Android. If you are interested in reversing android malware than you can check Android Reverse Engineering (A.R.E.)

USBHID C bindings - Cookbook USBHID C/C++ interface for mbed-based HID devices¶ There appear to exist two libraries that claim to support cross-platform HID device development for C/C++: HID API (tested on Linux, Windows and Mac OS X - shouldn't need a Windows driver) libhid (tested on Linux only, not in Ubuntu packages anymore - needs the libusb driver) Both will be discussed in this cookbook entry. mbed code¶ We'll run the USBHID_TestCase program on the mbed, to check that the bindings work, as suggested on the USBHID bindings cookbook page :)

The Cliffs of Inanity › Valgrind and GDB Valgrind 3.7.0 now includes an embedded gdbserver, which is wired to the valgrind innards in the most useful way possible. What this means is that you can now run valgrind in a special mode (simply pass --vgdb-error=0), then attach to it from gdb, just as if you were attaching to a remote target. Valgrind will helpfully tell you exactly how to do this. Then you can debug as usual, and also query valgrind’s internal state as you do so. pnmtojpeg - convert PNM image to a JFIF ("JPEG") image trusty (1) pnmtojpeg.1.gz Provided by: netpbm_10.0-15ubuntu2_amd64 pnmtojpeg - convert PNM image to a JFIF ("JPEG") image

API Hooking tool injecting code in the PE: tool explanation and application examples.. Hello again.. There was a long time since my last post, cos i was busy with several issues, but most time with this tool.. Checking it’s operation, testing the hooked PE in different OSs, changing the method used, etc.. Libnetpbm Image Processing Manual The Libnetpbm programming library is part of Netpbm. Contents Example Pin - A Dynamic Binary Instrumentation Tool Overview Pin is a dynamic binary instrumentation framework for the IA-32 and x86-64 instruction-set architectures that enables the creation of dynamic program analysis tools. Some tools built with Pin are Intel Parallel Inspector, Intel Parallel Amplifier and Intel Parallel Advisor. The tools created using Pin, called Pintools, can be used to perform program analysis on user space applications in Linux and Windows. As a dynamic binary instrumentation tool, instrumentation is performed at run time on the compiled binary files.

Installation - SDL Wiki' How to install SDL varies depending on your platform. You will need to download the source code first for most of them, unless prebuilt binaries are available. SDL 1.2 isn't covered here. It can be installed on legacy platforms that SDL2 doesn't support, such as Mac OS 9 or OS/2, but settling for 1.2 would not be a drop-in replacement for 2.0. An Anti-Reverse Engineering Guide Download source code - 4.87 KB Table of Contents Introduction In my previous article, I gave a short introduction into some Anti-Debugging/Debugger Detection techniques that primarily involved the use of Win32 API functions. In this article, I plan to travel a bit deeper into the interesting world of reverse engineering and explore some more intermediate level techniques for annoying reverse engineers. Some comments in my previous article noted that the techniques I presented could, and are most of the time, easily bypassed by intermediate level reversers; one statement I would like to make is that there is an ongoing battle between the coders who develop programs that protect against cracking and reverse engineering and the engineers themselves.

- Command-line Tools: Convert Use the convert program to convert between image formats as well as resize an image, blur, crop, despeckle, dither, draw on, flip, join, re-sample, and much more. See Command Line Processing for advice on how to structure your convert command or see below for example usages of the command. We list a few examples of the convert command here to illustrate its usefulness and ease of use. To get started, lets convert an image in the JPEG format to PNG: magick convert rose.jpg rose.png Next, we reduce the image size before it is written to the PNG format:

Corelabs site Title Dynamic Binary Instrumentation Frameworks: I know you're there spying on me Authors Nahuel Riva and Francisco Falcón In REcon 2012 Conference,