31 Places Everyone Should See Before They Die 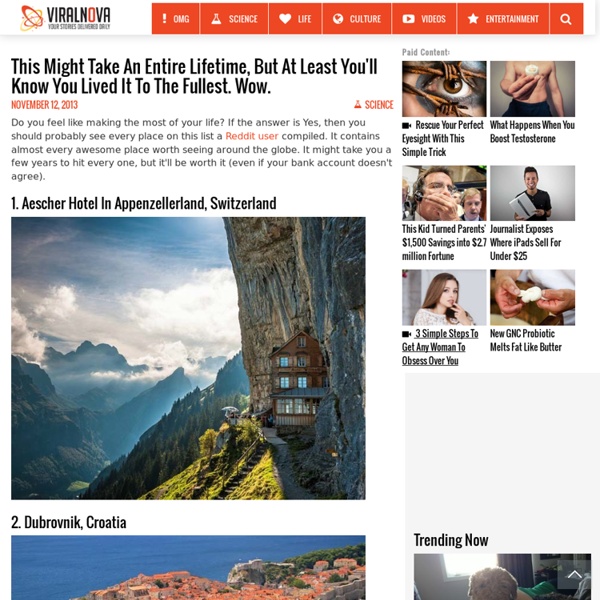 The Postman who built a Palace made of Pebbles This is the story of a French postman who spent thirty years of his life building his dream home– a palace made of pebbles and stones he found along his postal route…. Ferdinand Cheval allegedly first began building his “Palais Ideale” in 1879 when he tripped over an unusual stone. Inspired by its shape, he began collecting more small stones each day. At first he would carry home the pebbles he found on his mail rounds in his pockets, but as he began collecting more, he started carrying them home in baskets, and eventually a wheelbarrow. Cheval spent the first 20 years building the outer walls of the palace near his home in Drôme, France, using cement, lime and mortar to bound the stones he found together. The finished structure showed influences of Christian and Hindu architecture, though it was independent of any artistic movement or architectural style. But the postman wasn’t finished. Cheval and his wheelbarrow… From the Vault

WANDERLUST WEDNESDAY: 10 INCREDIBLE U.S. PLACES YOU MUST VISIT - ISHINE365 Blog Many of us don’t even realize that there are tons of natural wonders to travel to in our own backyard. We compiled a list of our ten favorite and most exciting U.S. spots to take a mini vacation to when you’re getting those wanderlust pangs. 1. Northern Lights, Alaska The Northern Lights are curtains of colored light in the upper atmosphere, caused by magnetic disturbances from the sun collide with atoms there. They create greenish-yellow, faint blue, or even blood red curtains of color. Source: Buzzfeed.com 2. A natural pool that was created when the dome of an underground river collapsed due to massive erosion thousands of years ago. 3. Located along the border between California and Nevada, It’s known for the clarity of its water and the panorama of surrounding mountains on all sides. Source: botoxbeerbling.com 4. “The Wave” consists of intersecting U-shaped troughs that have been eroded into Navajo Sandstone of Jurassic age. Source: Flickr: thaths / Creative Commons 5. Source: Flickr 6. 7.

29 Surreal Places In America You Need To Visit Before You DieBored Daddy If you live in the U.S., you don’t need a passport to see what mother nature has to offer. 1. Mendenhall Glacier Caves, Alaska In Mendenhall Valley of Juneau stands this 12-mile glacier that is home to some incredibly surreal ice caves. 2. Located near Page, Ariz., this brilliant slot canyon is split into two different sections, commonly referred to as “The Crack” and “The Corkscrew.” 3. The Oneonta Gorge is in the Columbia River Gorge with a unique set of aquatic and woodland plants. 4. Located in Washington state, hundreds of thousands of visitors come to the tulip fields between April 1–30 to see these gorgeous flowers in bloom. 5. This wilderness area is located in the Elk Mountains of central Colorado and has over 100 miles of trails. 6. This isolated island of bliss sits roughly 70 miles west of Key West in the Gulf of Mexico, surrounded by clear waters and an abundance of sea life. 7. 8. 9. 10. 11. 12. 13. 14. 15. 16. 17. 18. 19. 20. 21. 22. 23. 24. 25. 26. 27. 28. 29. comments