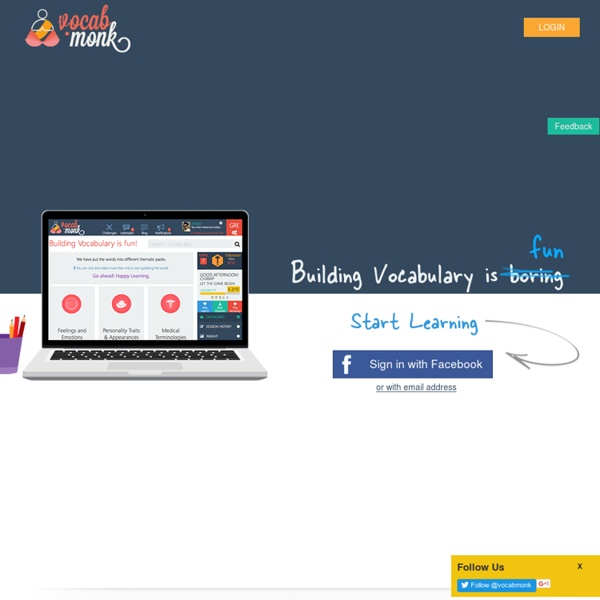 Understand what you read Word Spy Rewordify.com: Understand what you read Online Teaching: Kubbu proverbs TRADITIONAL PROVERBS: A barking dog never bites. A bird in the hand is worth two in the bush A fool and his money are soon parted. A friend in need is a friend indeed. A new broom sweeps clean. A nod's as good as a wink to a blind man. Back to Rainbow Humor Page Brain Pickings Have Fun Teaching 45 ways to avoid using the word 'very' Writers Write is your one-stop resource for writers. Use these 45 ways to avoid using the word ‘very’ to improve your writing. Good writers avoid peppering their writing with qualifiers like ‘very’ and ‘really’. They are known as padding or filler words and generally add little to your writing. According to Collins Dictionary: ‘Padding is unnecessary words or information used to make a piece of writing or a speech longer. Synonyms include: waffle, hot air, verbiage, wordiness.’ Adding modifiers, qualifiers, and unnecessary adverbs and adjectives, weakens your writing. This post gives you 45 ways to avoid using the padding word ‘very’. Three Telling Quotes About ‘Very’ “Substitute ‘damn’ every time you’re inclined to write ‘very;’ your editor will delete it and the writing will be just as it should be. If you enjoyed this, you will love: Top Tip: If you want to learn how to write a book, sign up for our online course. by Amanda Patterson © Amanda Patterson

Flash Cards and more! preview these cards St. large flash cards, medium flash, small game cards, bingo, handout same cards with b/w backings: medium flash, small game cards, bingo Valentine's PowerPoint flashcards Mark's note: *love struck and Happy Valentine's Day don't appear in the bingo cards because I teach them as extra but I have included them in the medium and small cards sets incase you wanted to use them. Play the online Valentine's Day FLASH game with your students.