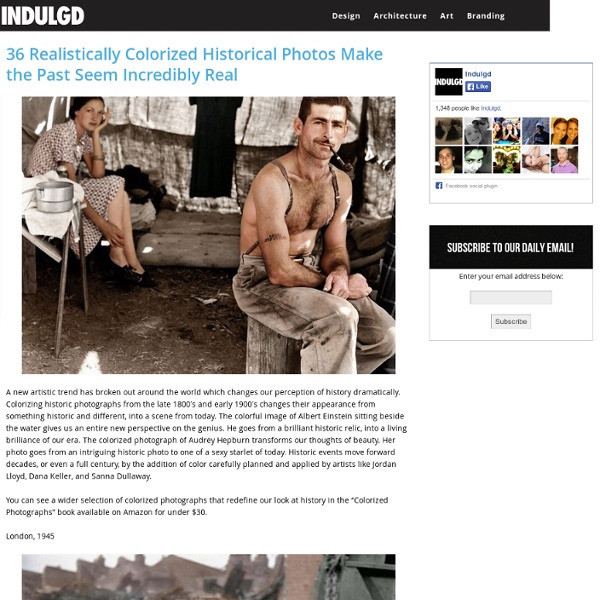 A new artistic trend has broken out around the world which changes our perception of history dramatically. Colorizing historic photographs from the late 1800′s and early 1900′s changes their appearance from something historic and different, into a scene from today. The colorful image of Albert Einstein sitting beside the water gives us an entire new perspective on the genius. He goes from a brilliant historic relic, into a living brilliance of our era. The colorized photograph of Audrey Hepburn transforms our thoughts of beauty. Her photo goes from an intriguing historic photo to one of a sexy starlet of today. You can see a wider selection of colorized photographs that redefine our look at history in the “Colorized Photographs” book available on Amazon for under $30. London, 1945 (Photo credit: valdigtmycketfarg) Hindenburg Disaster, 1937 Japanese Archers, circa 1860 (Colorized by Jordan J Lloyd) View from the Capitol in Nashville, 1864 (Photo credit: Sanna Dullaway) Washington D.

Vector & Psd Freebies : Templates, Mock-ups, Websites, Icons Instagram Widget (Psd) A cool flat style Instagram psd ui widget to display part of your Instagram activity. Continue Reading 64 photos by 64 photographers Another year has come and gone so it’s time for my year-end photo post (I guess it’s tradition now). Thank you, each and every one of you, for your continued support of Booooooom! I am thankful everyday that this is my job and I hope I can keep doing it for a long time. WTF photo book - 51 Crazy Pics Caught On Camera - Daily News Dig Tweet Check out our hilarious photo book with 51 of the craziest images you’ll ever see caught just at the right moment to get that real WTF moment in time! See Part 2 here: Part 2 – Another 51 Crazy Pics Source: Google About Google

GO: Neighborhoods Select a neighborhood below to discover what's going on in that area. Crown Heights 48 Artists Registered10 artists chosen at random. See all Crown Heights artists. Neighborhood News The 33 Most Beautiful Abandoned Places In The World Many people doesn’t know, and didn’t even heard about these famous abandoned places. Many of these places are really something amazing, but they are also really sad when you take a closer look at them. On the folowing list, you can see abandoned planes, abandoned ships, as well as the abandoned houses, and so many other things, that are really amazing and magnificent. So, check out these amazing abandoned places photos. 1.

The Harshly Lit Darkness of Lucian Freud Lucian Freud, as presented in the gossipy new biography, Breakfast with Lucian by Geordie Grieg, lived for 88 years entirely guilt-free, which is a remarkable bit of pathology in itself, but especially so for the grandson of the man who tagged guilt as the glue holding civilization together. Freud, in Grieg’s account, was monumentally self-centered — compulsively doing whatever he wanted, with whomever he wanted, yet always managing to retain social and familial relationships (until he didn’t) through a spellbinding charisma and joie de vivre that often, though not entirely, masked an undertow of threat. Grieg records a reminiscence from Victor Chandler, Freud’s favorite bookie, “who once boldly questioned Lucian about his role as a parent” (Freud recognized 14 children by six women, all but two born out of wedlock, while rumors claim that he fathered as many as 40): I asked him if he ever felt any guilt about his behaviour towards his children, hardly seeing them. He said “None at all.”

50 Great Photographers You Should Know (with portfolios) Lots of wonderful things happen around us all the time; being able to see is easy, but being able to capture that very moment is probably the hardest part. A good photo comprise of many things, not only you must hit the shutter at the right time and moment, the perspective, composition and color coordination plays a big role too. Being a good photographer is not easy, let alone getting to that professional level. This weekend, we want you introduce you some of the greatest photographers around the globe and their awesome portfolios.

These 19 Nightmarish Places Will Keep You Awake At Night… They Sent Chills Do... As you go about your daily life, it’s easy to forget all of the weird and wonderful things that are tucked away around the world. A Redditor cobbled together 19 of the strangest places on earth, reminding us all of the creepy things that could be hidden in our very towns. Dark forests, abandoned cities, strange museums and other oddities are everywhere. You just need to know how to find them. 1.) Hoia Baciu Forest (Romania): This forest is known as the “Bermuda Triangle” of Romania.

Traveler Photo Contest 2013 Winners Announced For our 25th annual photo contest, National Geographic Traveler magazine received more than 15,500 entries from skilled photographers from around the globe. Taken in locations ranging from Brazil to Kenya, the winning pictures show everything from quiet landscapes to surprising moments. Did your favorites make the cut? See the winners!

Free Photographer's Pricing Guide: How to Price Photography It’s confession time: I think that the majority of pricing guides for photographers are lame. That’s not to say that they don’t work, or that they aren’t worth the money that people sell them for. It’s just that most of the pricing calculators have some major flaw that makes them not nearly as effective as I think they could be.