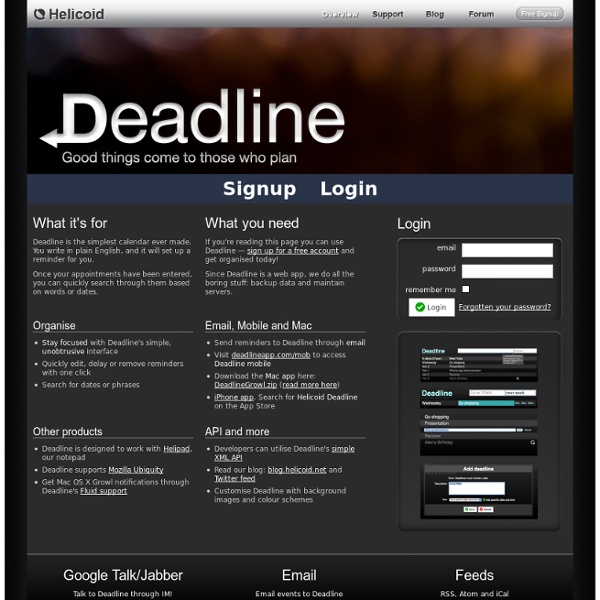 EtherPad: Realtime Collaborative Text Editing 25 To Do Lists to Stay Productive I come across many services a day while researching for Solution Watch, and as many of you know, I take a lot of notes to organize my thoughts about them. Until recently, the only method that I used to keep organized with the services I wanted to write about was by reviewing my notes and email, then selecting one from the list. Now, I’ve learned to review all my notes at the end of the day and add each service that I would like to review to an organized to do list. The problem I was having was that I would write all these notes, but I wouldn’t always get to writing about the services I wanted because sometimes I simply forgot (A Not-To-Do List) or the service got carried to the bottom of my notes archive. I then started to use a to do list and now I am much more organized and every day open my to do list and get a clear overview of what’s on my plate to review. All products are clearly listed all with open check-boxes waiting for me to check them off. More Online To Do Lists: To Do Lists

Make Your Own Moleskine-Like-Notebook What we'll make: Your very own Moleskine-like-notebook/journal/sketchbook. The one we'll be making is 3.5 x 5.5 x .5 inches. Don't be put off by the many steps involved. This particular notebook was developed over many years of feeble attempts to organize my thoughts, appointments and small sketches. I hope you enjoy making and using them as much as I have. Table of Contents: Page 1. Materials Needed: 24 sheets of paper 8.5 x 11 inches (use 20# bond at first then you can try other types of paper) One 8.5 x 11 inch sheet of a "special" paper . Tools Needed: A bookbinders needle . Step 1. Take a sheet of your paper, t-square, triangle and pencil and mark your cut lines as shown. Step 2. Now you have 26 sheets of paper (folios), 24 for your pages and 2 for your endpapers. Step 3. Collate six of your folios into a signature as shown then flatten them. Step 4. Gather your stack of signatures and once more jog the bottom and spine edges to make them nice and neat. Step 5.

Mojonote | Everything you need to remember, in one place You Can’t Multitask I can only think about one thing at a time. Any girl reading this just going to roll her eyes and think, “Of course. You’re a guy!”. But it’s not just true for me, it’s true for everyone. And not in that way. At first, this claim can sound fantastic. In both cases the extreme situation frustrates your habits and forces you to actively think about what you are doing at the expense of your other task. Still not convinced? Want another experiment? Software often requires us to actively think about two things at once: like needing to know if the current content of the clipboard is important (when you should be thinking about the edit you want to make), or whether the “predictive” text entry on cell phones has incorrectly guessed the word you want (when you really just want to be writing your message). Not being able to think about two things at once means that we can’t truly “multitask” things that we need to think about. Time for another experiment. What’s the lesson to be learned?

BIF-3: Dan Heath - Think Inside the Box Take a sheet of paper and write down everything you can think of that's white. You have 15 seconds, go. Done? Good, now take 15 seconds and write down everything that is or could be in your refrigerator that's white. Finished? Raise your hand if had better luck with the second list. Dan Heath, who co-authored the book Made to Stick: Why Some Ideas Survive and Others Die with his brother Chip, started his talk at BIF-3 this afternoon by asking the audience to complete the exercise I described above. We've all heard the term "thinking outside of the box," Heath told the audience. Improv actors, said Heath, have long utilized the benefits of inside the box thinking. Inside the box thinking is found all around business in the form of what Heath called a "high concept pitch." The box can inform many decisions taking place throughout an organization. "The idea that we need to think out of the box is wrong," concluded Heath, "instead we should go box shopping.